Setting apart different American Colonial houses isn’t an easy job because there are many distinctive aspects to consider. American colonies were spread out quite extensively on US territory so there are various differences in terms of available materials and climate conditions. Also, American Colonial buildings designed for urban areas will most likely not resemble the look of rural houses that much. Despite the number of distinctive versions, American Colonial architecture features some key elements that are easy to recognize.

Through the following American Colonial houses, we’ll explore these essential features of the style to provide inspiration for your own building projects. Check out the most charming Colonial-style houses to learn more about this aesthetic. 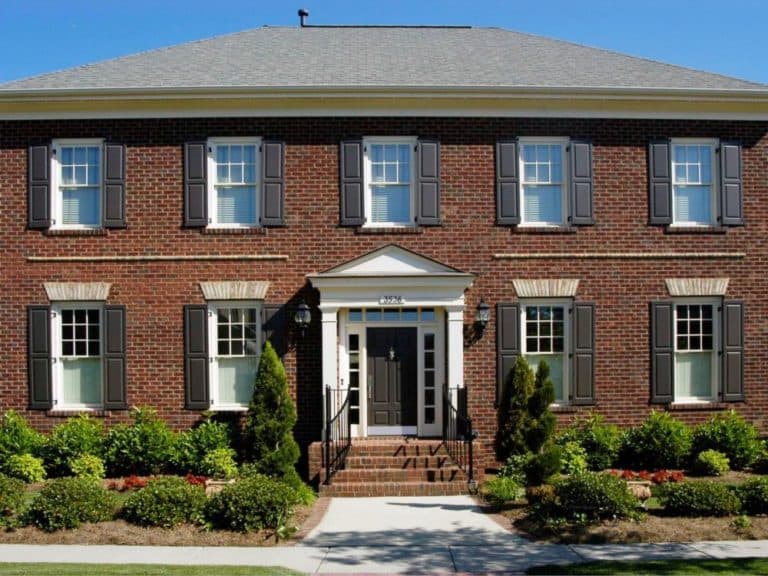 While it’s not necessarily the first choice of a Colonial home, brick can be used quite often for the facade of buildings designed in this style. It’s a more modern approach compared to the historical reliance on clapboard siding.


Brick is a great material for an American Colonial home because the architecture is typically plain and straightforward. The characteristic brick patterns can enliven it and give it that cozy Colonial style. 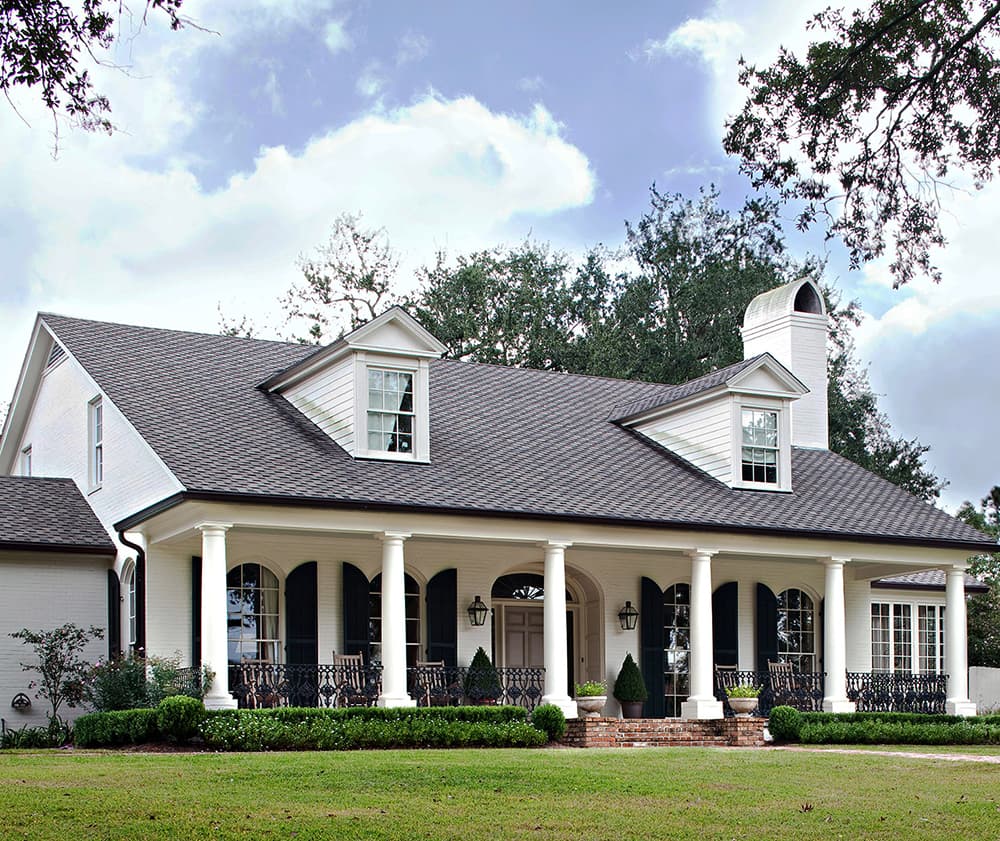 Due to the fact that original Colonial homes had a strong need for efficient drainage, steeply pitched roofs have become a staple for this design style. This kind of roof worked ideally for typical Colonial houses that didn’t require a full second floor.

Builders would save some resources by going for a simpler half-story that pairs nicely with the pitched roof. The result is a convenient attic space that can be furnished for different purposes. Dormer windows became more popular in later iterations of the style. 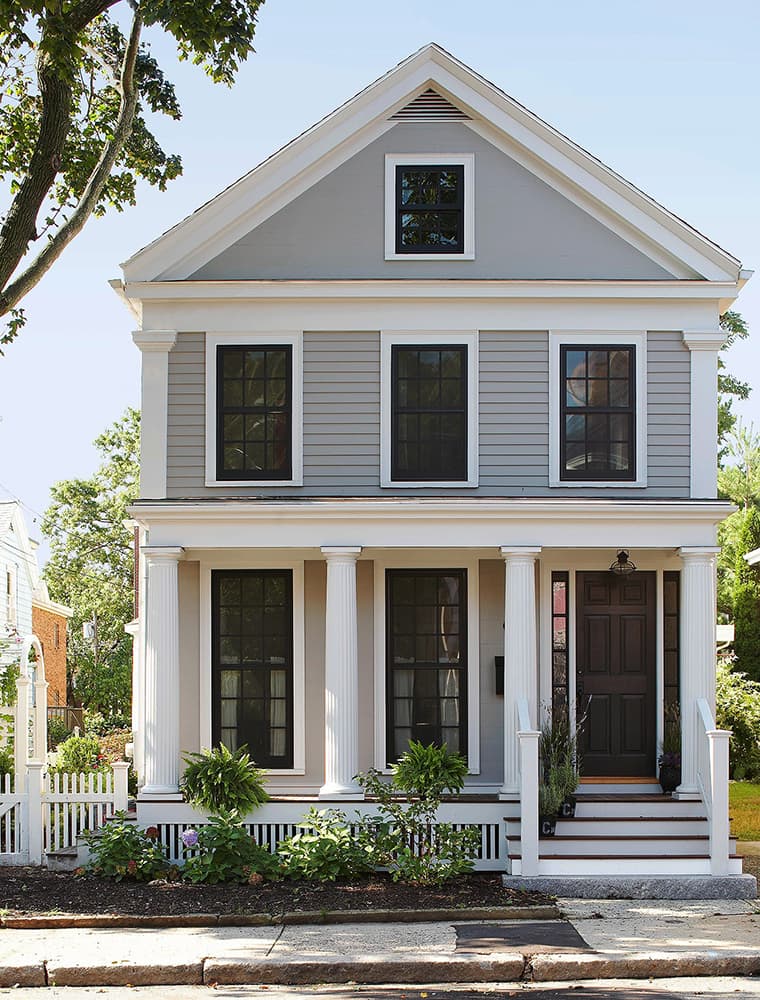 Colonial-style homes tend to favor symmetry to create a more visually pleasing look. There’s a soothing sense of comfort provided by mirroring the arrangement of various elements such as windows and columns such as this American Colonial home shows off.


The symmetrical effect is more noticeable for the house’s exterior but the interior can often follow in the same aesthetic concept to reflect geometrical uniformity. 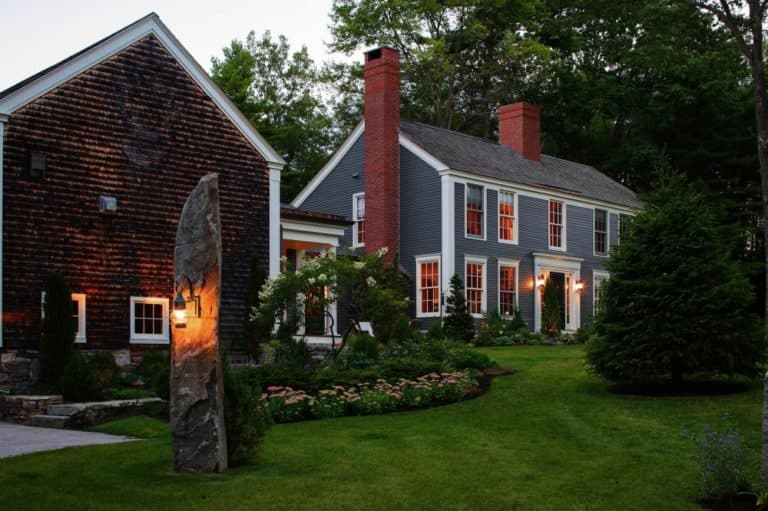 The classic heating method used by a Colonial house will most likely involve fireplaces. That can offer a great design opportunity when it comes to the exterior of the home. Symmetrical brick chimneys are elegantly emphasized to boost the visual impact of the fireplaces.

Even if a particular column isn’t connected to a functional fireplace, you can still take advantage of a stylish symmetry to enhance the exterior look. 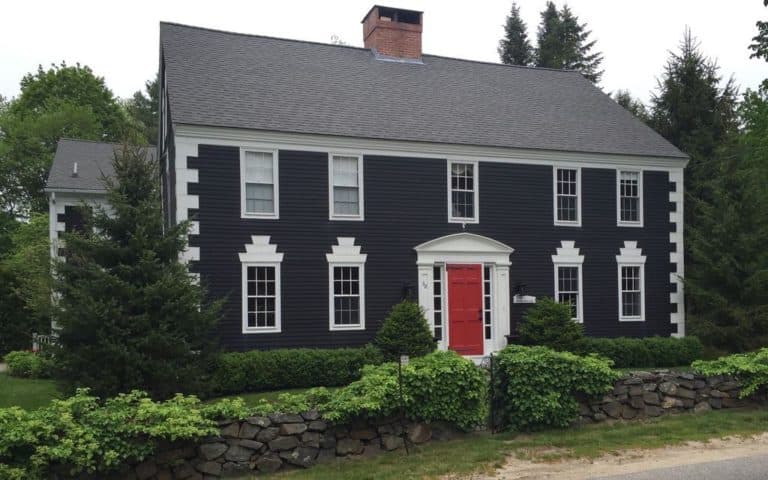 While most American Colonial homes are designed with neutral colors, that doesn’t mean you need to resign yourself to a monotonous look. A colorful accent such as this red front door can bring a touch of personality to beige, dusty gray, or black facades.


Homeowners can use painting to their advantage to let only a certain element stand out more effectively without making the whole house seem too bright and out of place compared to the others in the neighborhood. 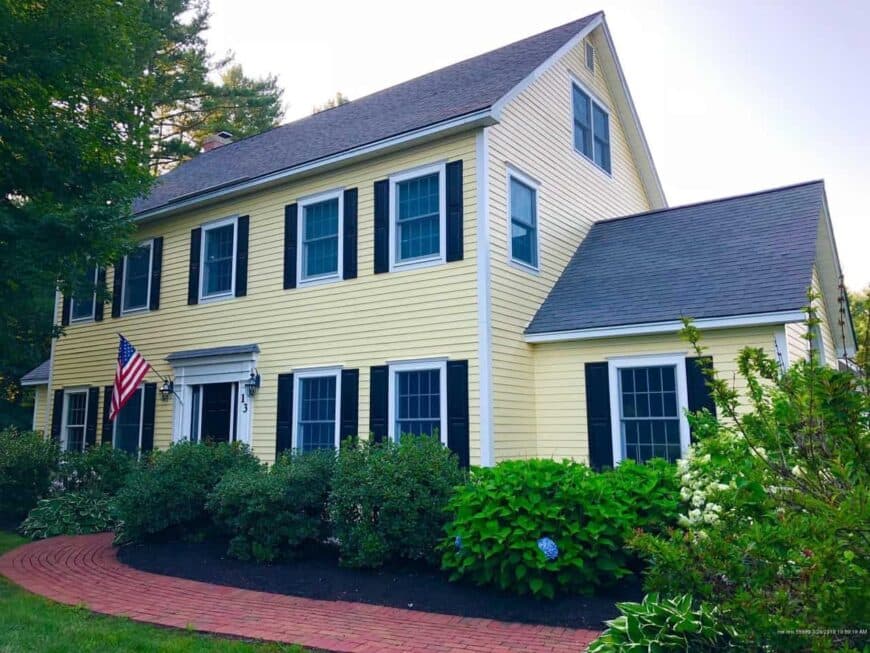 With a refined blend of contemporary yellow and black colors, this house in Maine seems to give off a strong American Colonial vibe. The home benefits from some modernized features but the distinctive Colonial vibe is retained despite the more innovative color contrast between the facade and the shutters. The black painted shutters are very often seen in Colonial architecture and, in this case, they help to make the symmetry of the windows stand out. 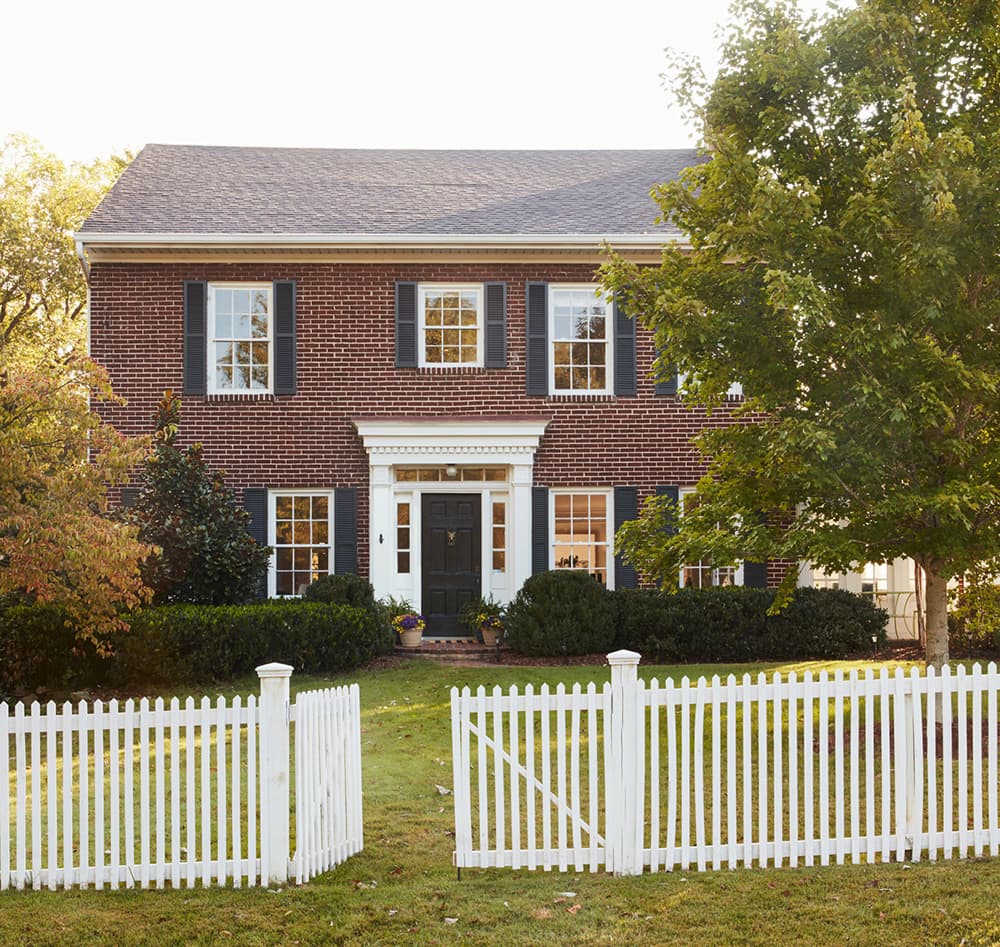 Depending on the regional influences, some Colonial houses can have two or even three stories. This kind of simple layout can be more efficient than others. Whereas modern homes tend to favor open-concept configurations, the interior of these houses is more likely to have separate rooms. There’s a practical reason for that because it’s easier to heat only a specific area in the house. The fairly low ceiling also contributes to that effect. 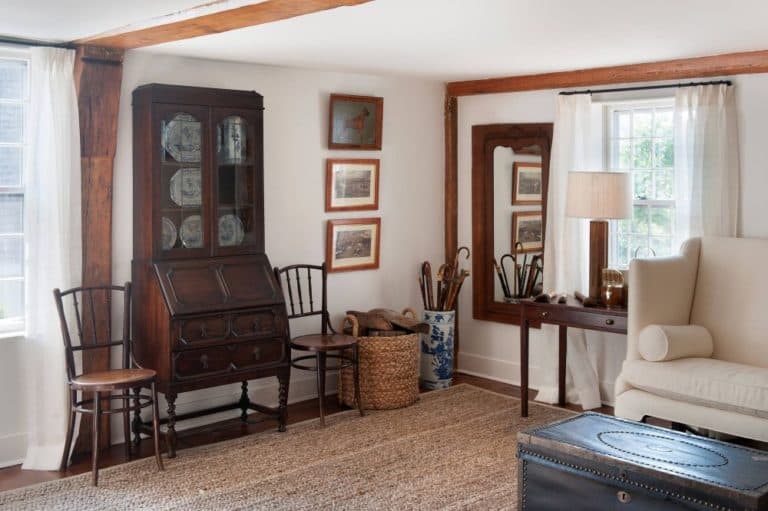 If you’re restoring an old American Colonial home, it can be quite challenging to figure out the best design approach for the interior. Ideally, the interior decor style should mirror the look of the exterior.

For Colonial homes with a rich history, this typically translates to a more traditional style full of antique pieces and a calming neutral-toned color palette. Things such as vintage trunks or chairs can enhance the Old World feel of the home. 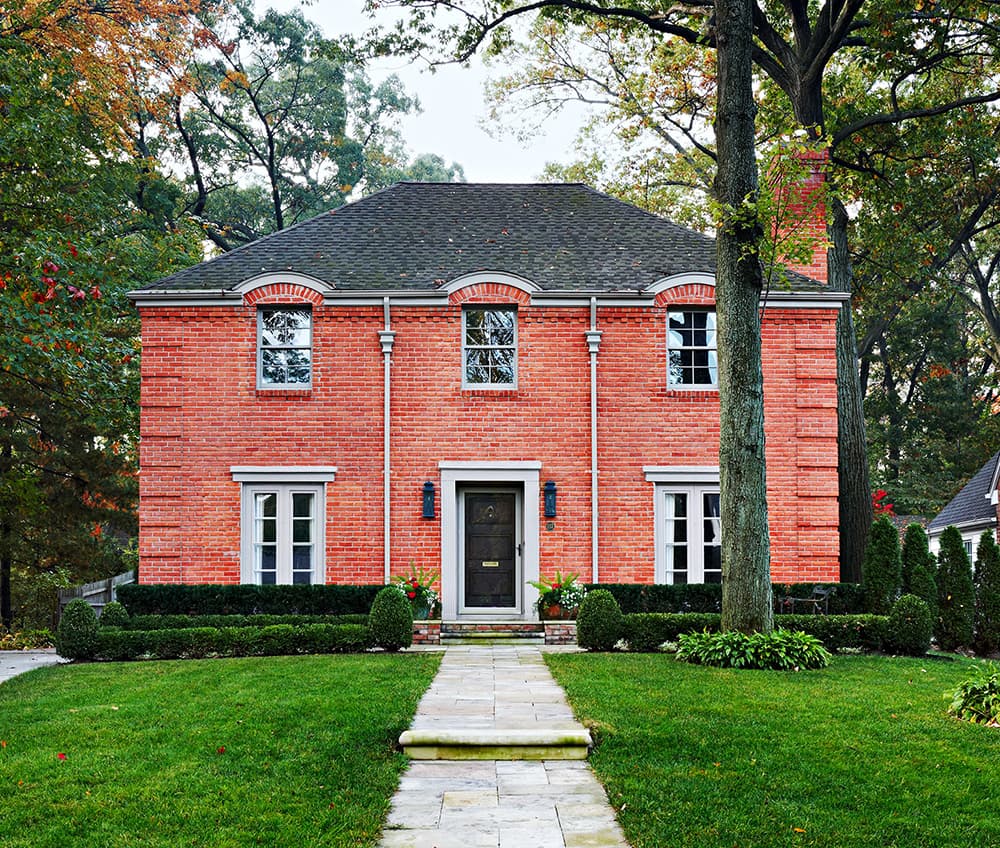 When it comes to the ornamentation of the surrounding landscape, there are a few essential aspects to consider for American Colonial architecture. The style favors inconspicuous decorations for the surrounding area of the house.


With some exceptions, most Colonial-style houses look more authentic if you choose formal landscape designs. No bold or exotic vegetation is used while the shrubs and trees are neatly trimmed to maintain a harmonious geometric look that blends elegantly with the symmetry of the home’s exterior. 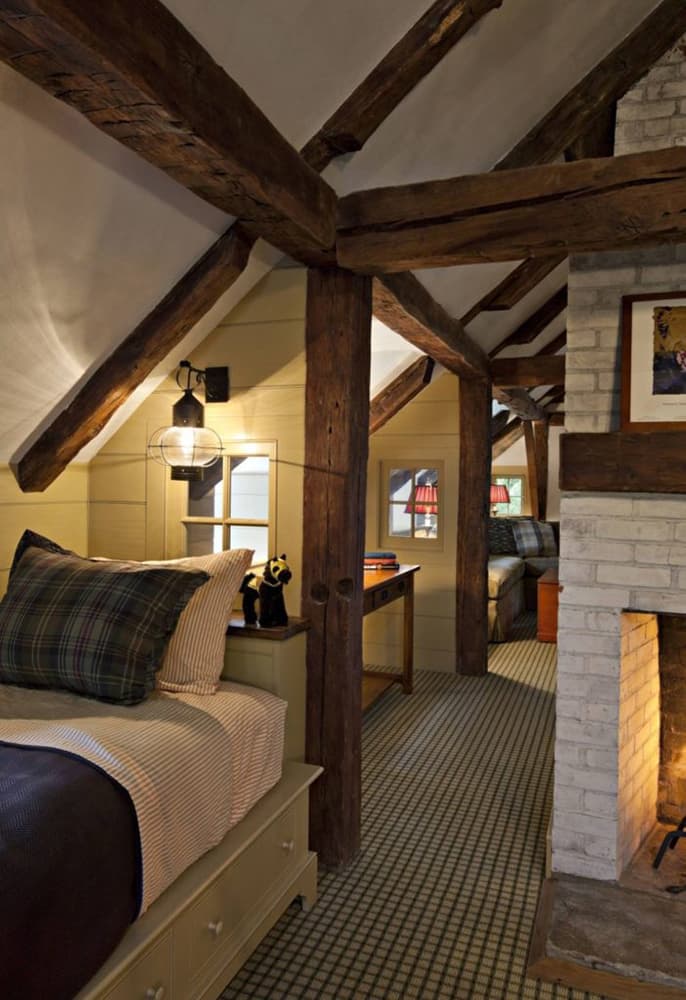 The use of old wooden beams brings some rustic flair to any American Colonial attic. This element can be found in other styles as well but it seems particularly charming when it’s integrated into the attic bedrooms of Colonial-style homes.

It provides a sense of structural solidity while the rough and weathered look seems to contribute to the general coziness of the area. These old beams are often paired with brick fireplaces for an authentic vibe. 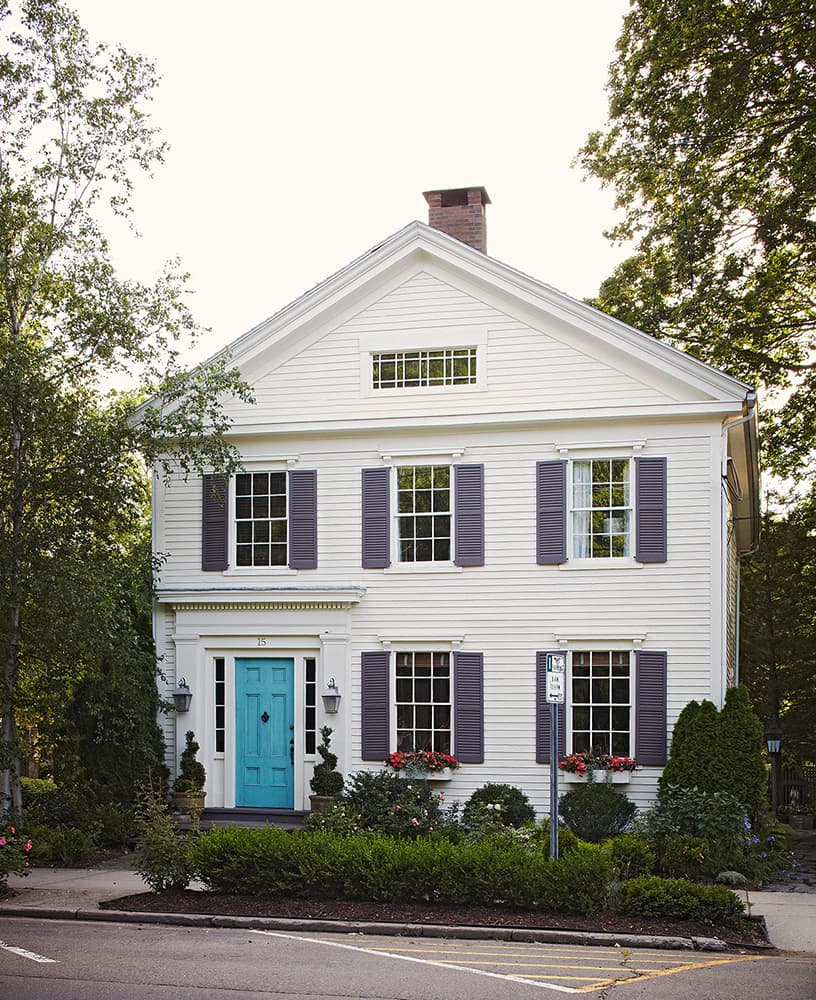 The regularity of the American Colonial home’s geometry appears to be a trademark design feature. This isn’t just an aesthetic choice to keep a uniform style that’s pleasing to the eye but this straightforward approach can be more practical as well.


A square home with symmetrical rectangle windows will be easier to modify in case you want an aesthetic update. Compared to more complicated home designs, Colonial structures are a breeze to renovate and add extra elements. 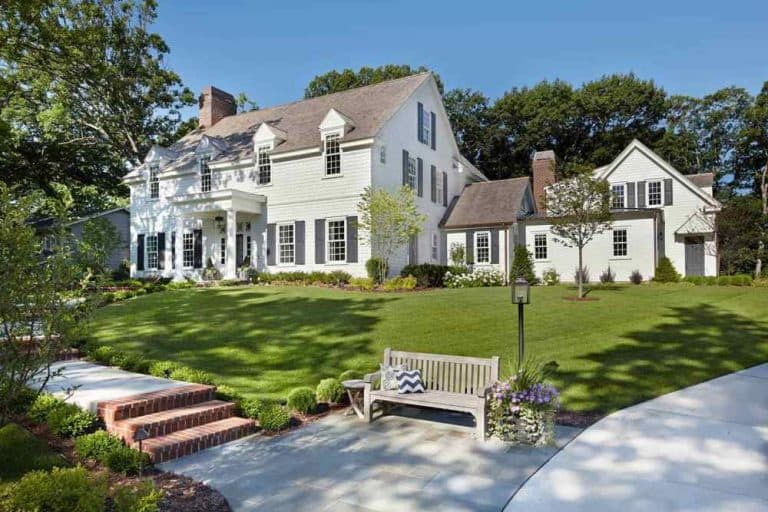 Inspired by the farmsteads in the area, this beautiful Colonial home offers lots of stylish decorative accents for fans of more rustic aesthetics. Even though the interior has been designed to meet the needs of modern life, the exterior style shows off some distinctive farmhouse elements. Notice the use of white cedar cladding and the bold design of the roof lines. 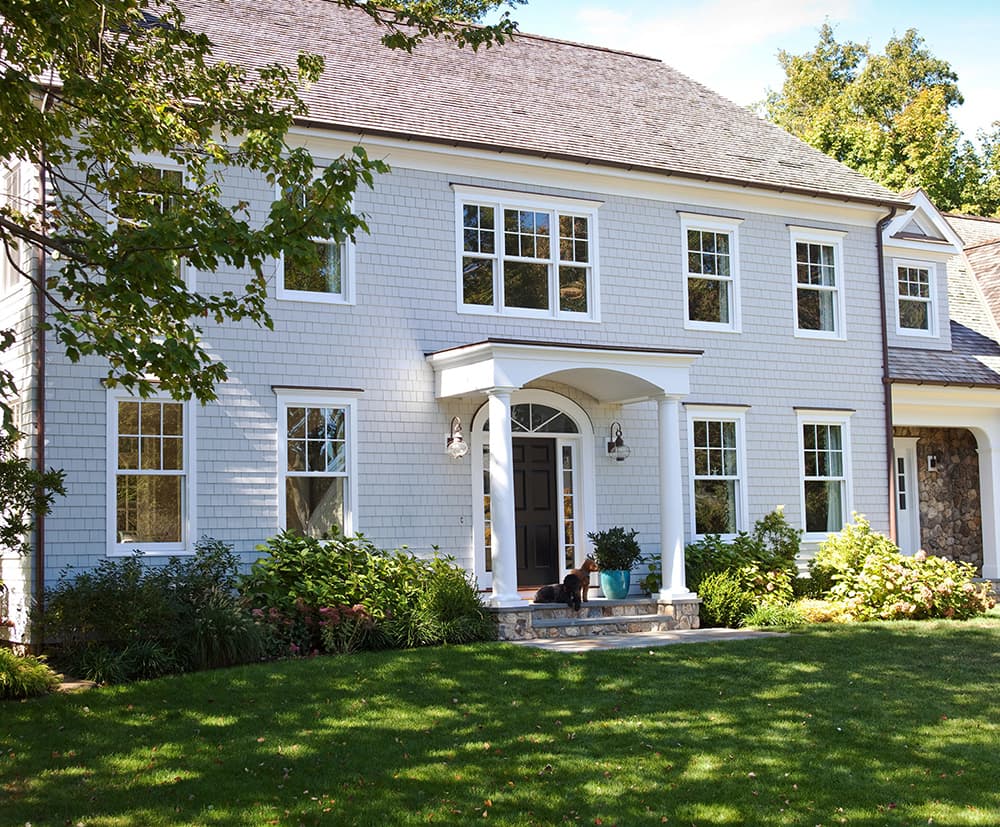 Traditional Colonial homes are crafted using clapboard siding simply because fancier material choices weren’t available in the past. If you wish to recreate the authentic vibe of American Colonial architecture, it’s recommended to focus on local materials such as wood.


Clapboard siding is a safe bet even though you can now purchase many different kinds of siding. Even modern American Colonial homes still use clapboard siding because of its timeless visual appeal. 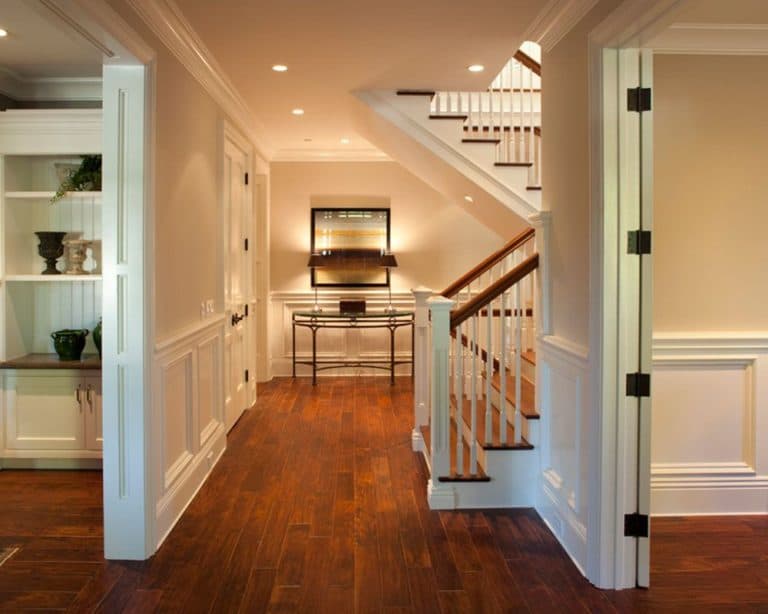 Having a long hallway is a notable characteristic for the interior of American Colonial homes with a Georgian influence, though not necessarily. It’s found on various Colonial-style interiors because the rooms in the house are clearly separated. There’s the need for a long entryway to access all the rooms properly so it serves a functional purpose. 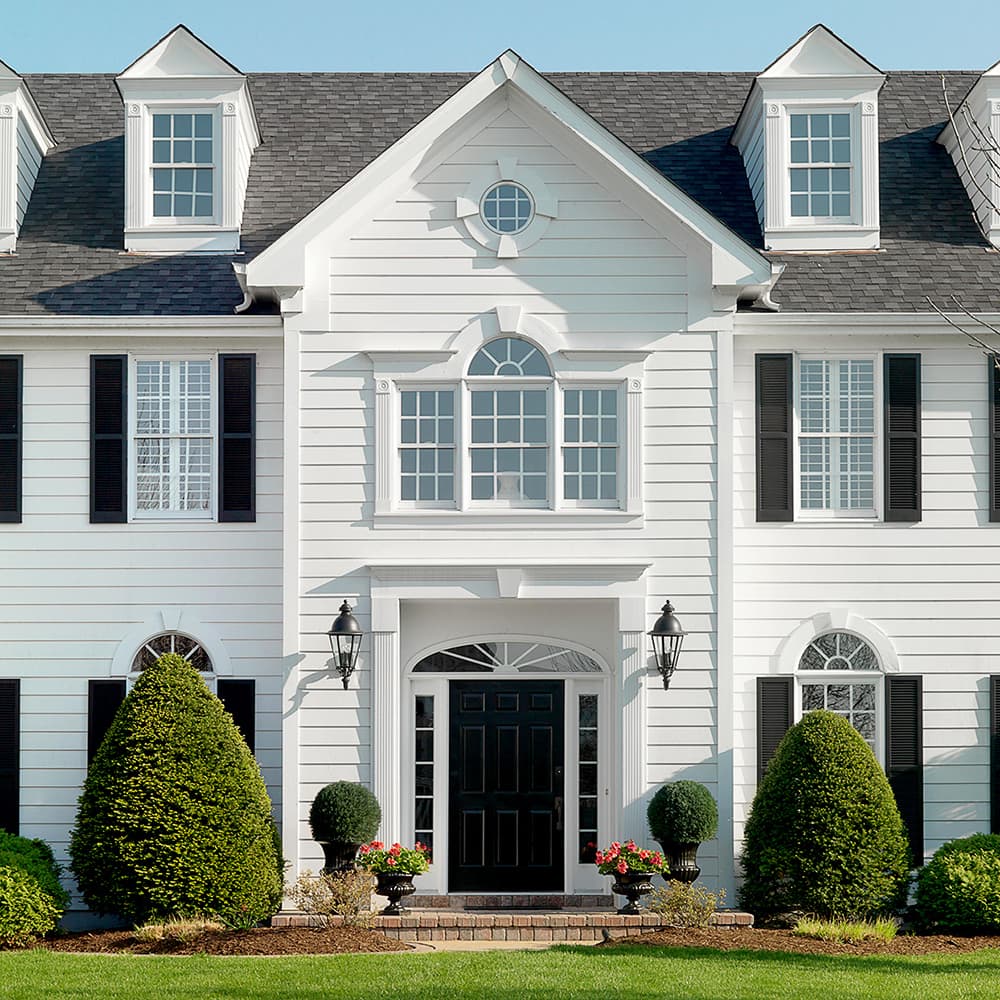 Considering the strong focus on pleasant geometry and symmetric elements, it’s not surprising to see the tradition of Colonial houses featuring a strictly on-center entry. The front door is positioned right in the middle as you look at the front of the house.


This is a classic aesthetic choice for American Colonial architecture that also contributes to an easier placement for the staircase. The result is a practical interior layout that starts with the middle front door, continues on a long hallway, and finally reaches the stairway in the center of the house. 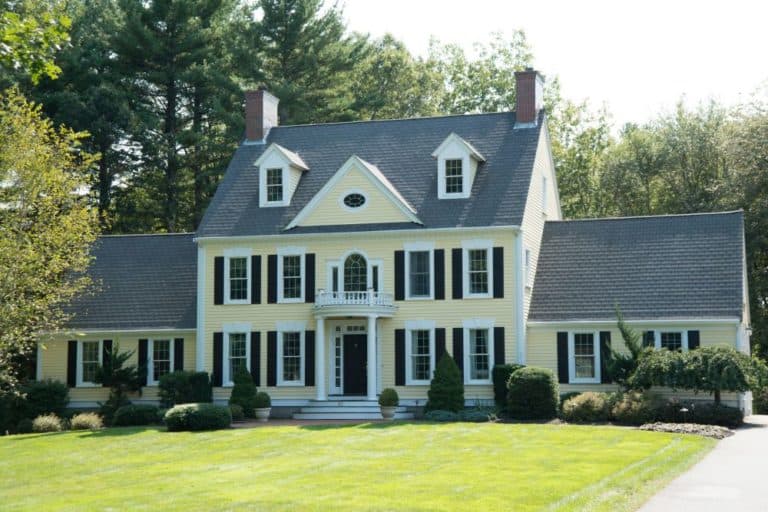 A simple visual trick for enhancing the look of an American Colonial home is to expand it through double side wings. The addition of extra rooms can be welcomed if you prefer the traditional Colonial architecture yet have greater space demands. As a bonus feature, this expansion has great potential when it comes to the overall symmetry of the building. Notice the perfect mirror effect formed by the windows and roofs of the side wings. 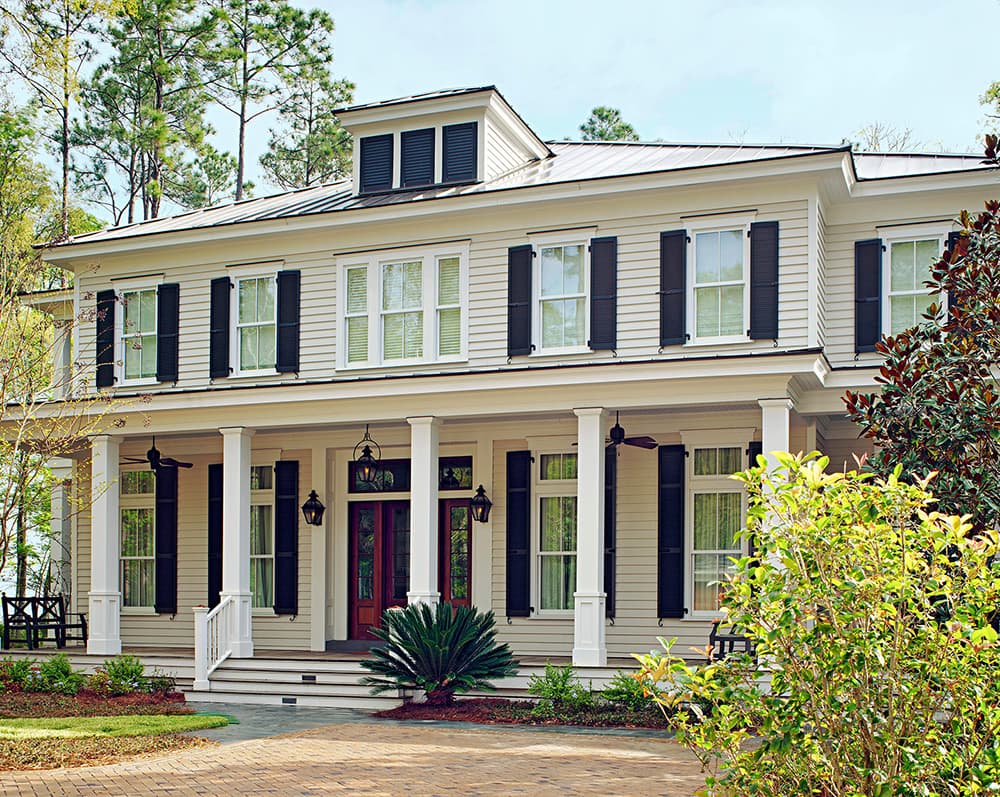 The use of columns in American Colonial homes is strongly related to Greek architecture influence. Lots of grand buildings incorporate the antique charm of a column. Colonists that wished to pay homage to the rich history of their native European countries have incorporated columns when building homes in the US.


This architectural detail is usually found in the front of the house where columns are used for adding support to the portico or the porch. Most classic Colonial-style homes lack columns because they don’t really match the minimalist design approach of the aesthetic. This element is only present in some particular versions of American Colonial homes. 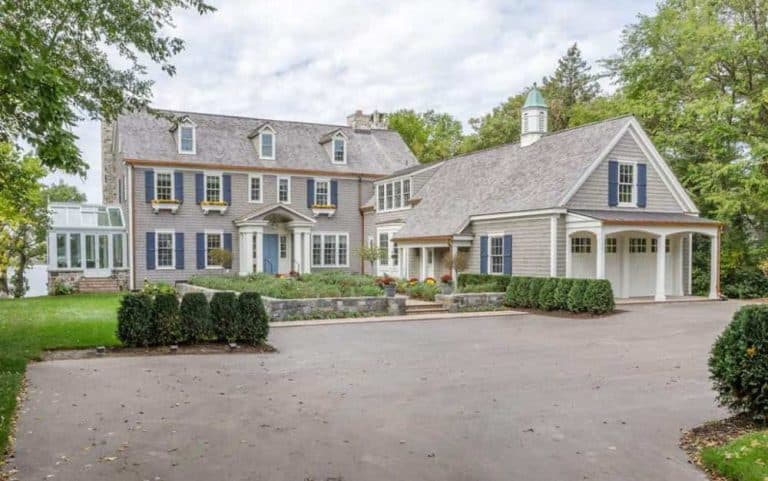 Although American Colonial architecture is known for its understated look with just a few rooms, that doesn’t mean you need to restrict yourself to a tiny home. There are many Colonial-style lake houses such as this one shown here that take the architectural concept to a new level.

Compared to a basic Colonial home, this one has a very large L-shaped floor plan with various additions. It looks even more stunning when taking into account the natural surroundings. 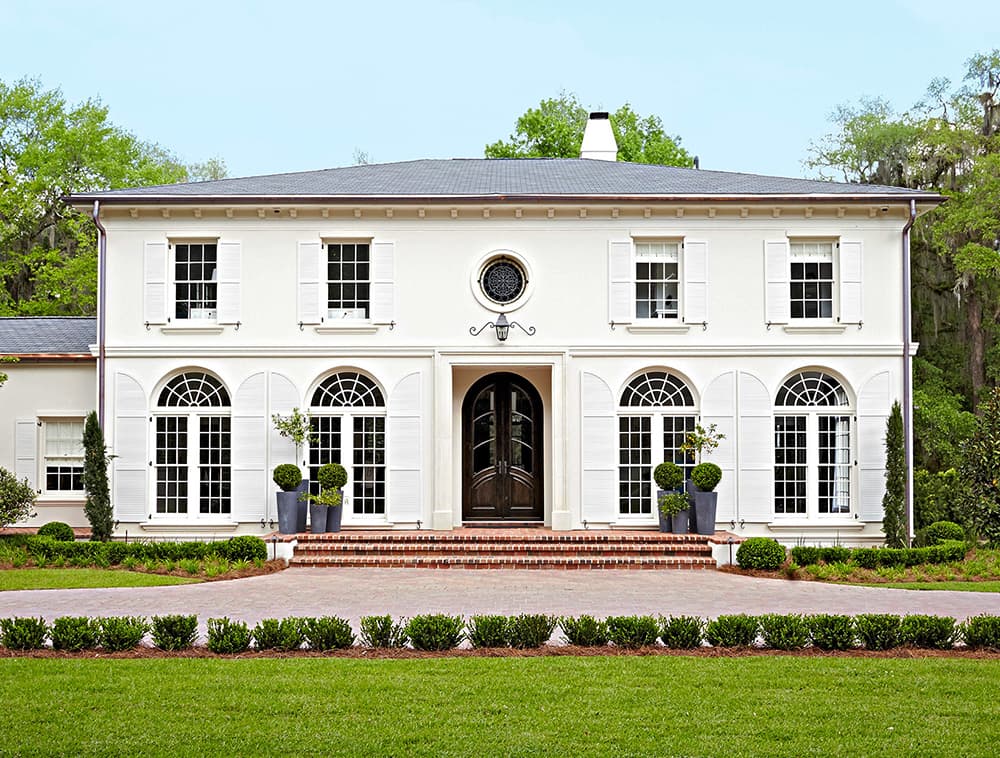 The plain and flat facade of an American Colonial house may not appear very impressive at a first sight. Even larger homes such as this one are designed in a very simple style. To avoid a monotonous look, subtle embellishments can be added for accentuating the elegance of the home’s understated appearance.


This facade is decorated with a stylish arched front door and eye-catching grid patterns on the windows. A small window above the entrance is a usual tradition of Colonial architecture yet here you can find an unexpected round window to provide some extra visual interest. The symmetry is more clearly emphasized by multiple mirrored elements, including transom windows and shutters. 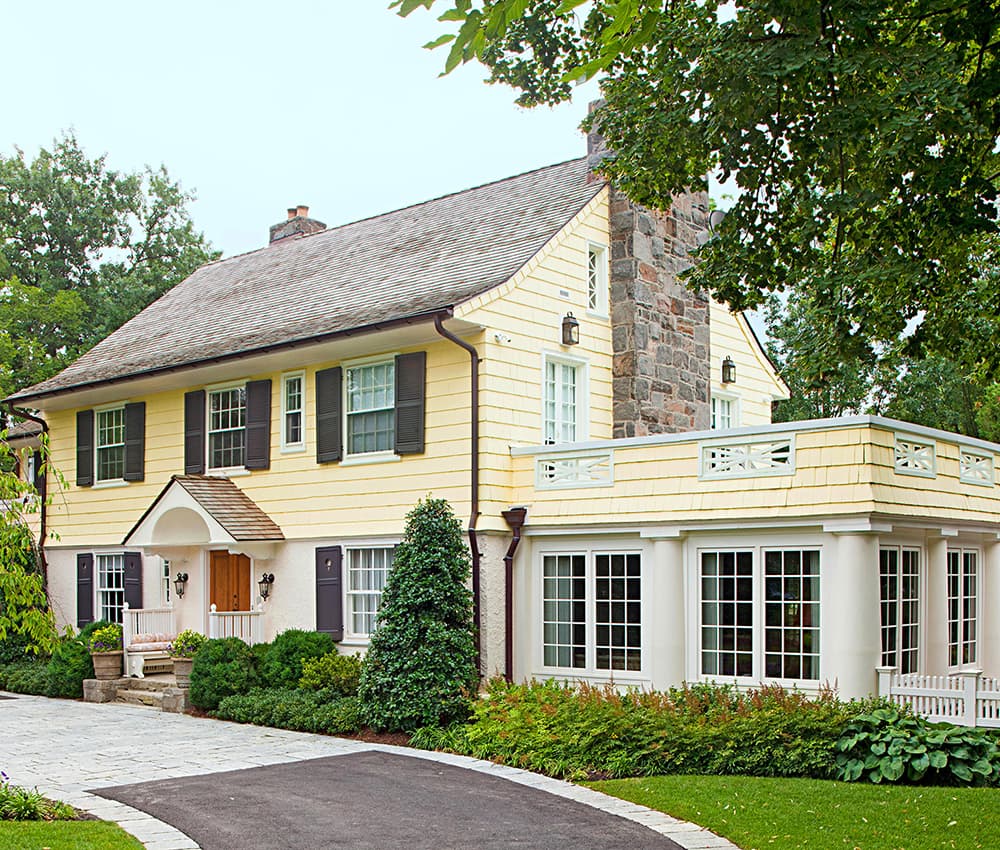 Check out this interesting example of an American Colonial house that benefits from a stylish renovation. The square footage has been increased by including a sunroom on the side. No considerable modifications have been made to the original design of the house to retain the characteristic Colonial flair.

While the building has been created in a four-over-four room configuration, additional expansions are very easy to include without altering the authentic feel of the home.