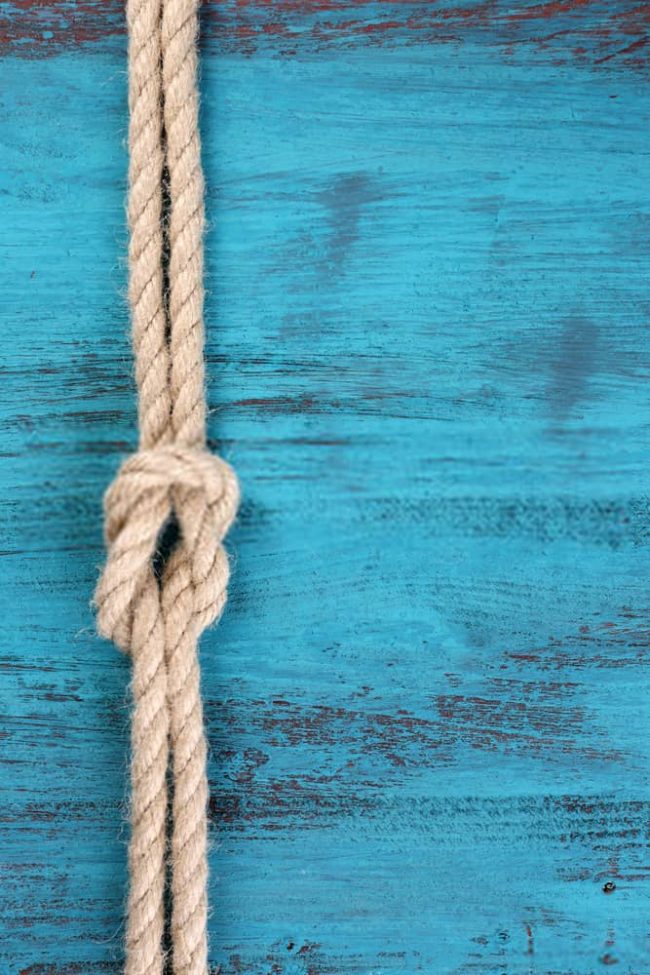 The right type of knot can make a critical difference in a survival situation but it’s also extremely helpful in general. Tying down items represents a necessary skill to have for a wide range of outdoor activities. Although there are so many different types of knots out there, it’s safe to say that DIY enthusiasts and casual outdoorsmen should focus only on the most useful ones.

Some knot styles can seem familiar to you because they are more popular or even taught in schools. Others, however, are more obscure but can be valuable to know in many situations. Make sure you don’t confuse knots with hitches or lashings. The latter will usually involve other objects but a tightened knot should hold by itself without problems. Knots are essentially ropes fastened together. Let’s take a look at the most important types of knots and how to create them. 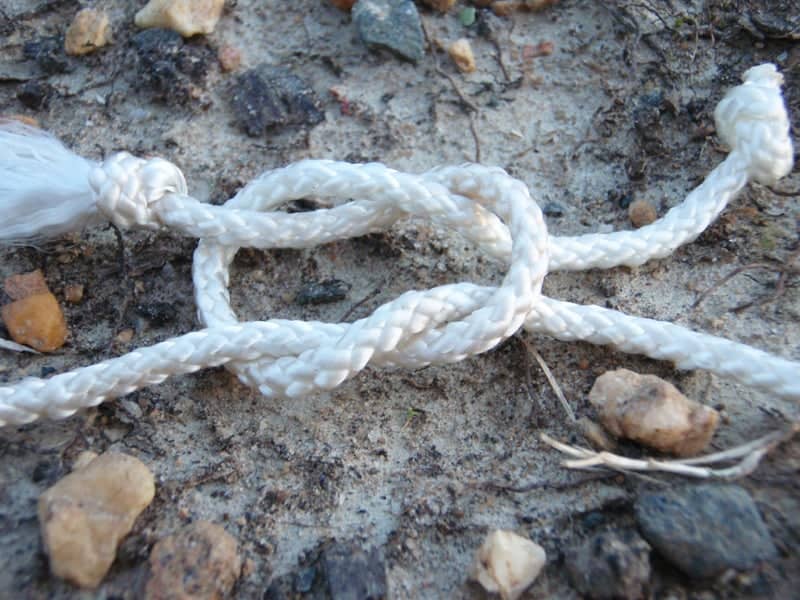 One of the most basic knots that everyone should know, the square knot is ideal for a lot of purposes such as tying a bunch of items together. A set of two twists form the basis of the square knot. The first one squeezes the items while the second twist brings stability through anchoring everything together. Both twists of the rope will essentially lock each other in place for increased strength. 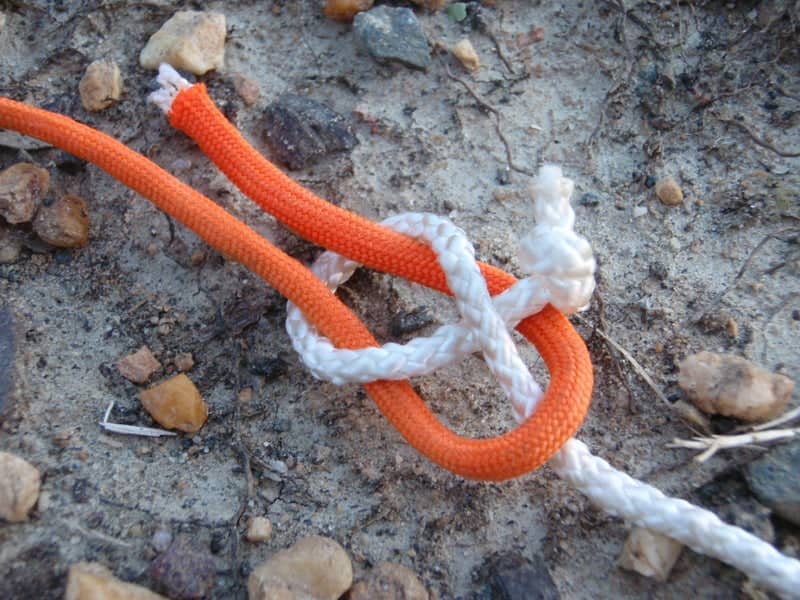 The sheet bend knot is ideal for joining together ropes with different thicknesses. It’s recommended for more difficult materials to work with. The process of tying a sheet bend starts with bending the rope with a larger diameter until you create a “J” shape. The other rope goes through this hook-like shape and wraps it around while keeping the smaller line between the ropes. 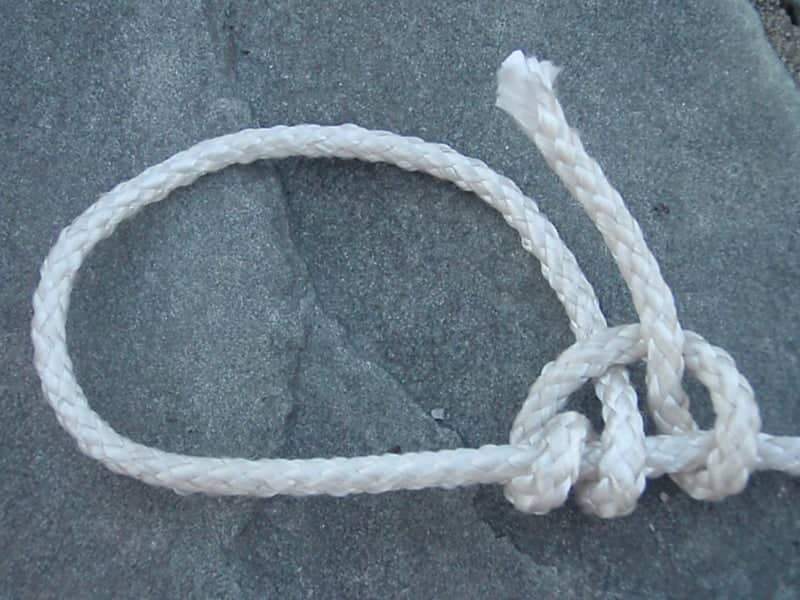 If you’re looking for a type of knot that can work well for tent guy lines, the taut line hitch is highly recommended. It’s designed to create a lot of tension while reducing the tendency of line slipping. The taut line hitch works well for many applications, including cinching items together. Keep in mind that it’s quite hard to remove compared to other knots, depending on the load and tightening power. 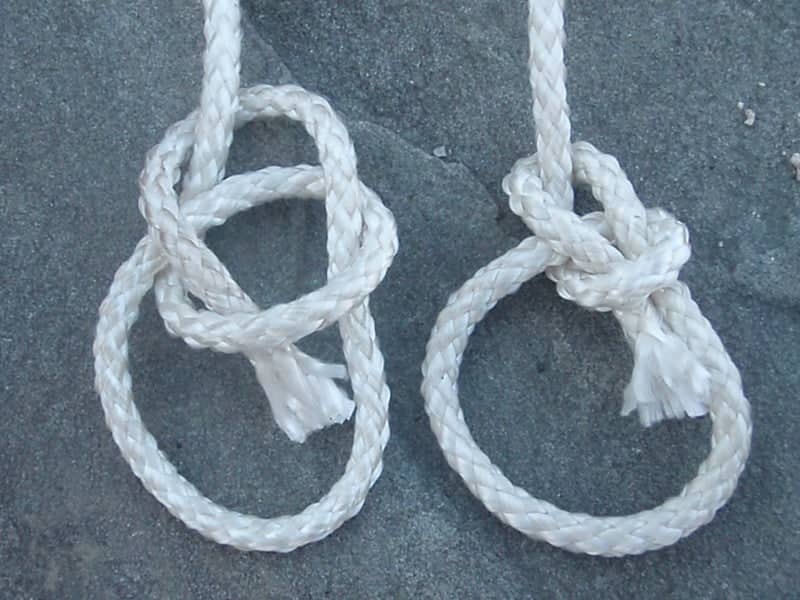 The bowline knot makes use of a loop that works nicely as a hand or foothold. It’s a solid type of knot for users who want to tie a fixed loop in ropes that can’t expand or loosen. Bowline knots are recommended for creating lashings around stakes or other objects. With a loop formed at the end of your rope, you just need to get the working end through it and around it. Keep the shape for this second loop that needs to be tightened to create the bowline. 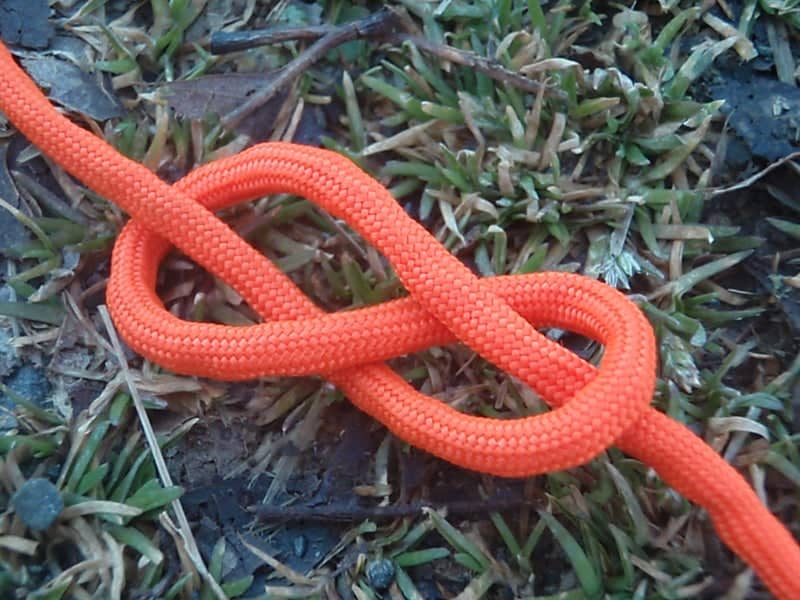 Sailors and climbers are probably familiar with the figure eight knot. It’s a solid pick if you’re worried about the rope sliding through grommets. This type of knot creates a stopper on the line. If you’re interested in learning how to create the figure eight knot, it starts by forming a loop and then continuing around the line to pass the original loop and form another one. The result is a figure eight knot that’s sturdy and reliable. 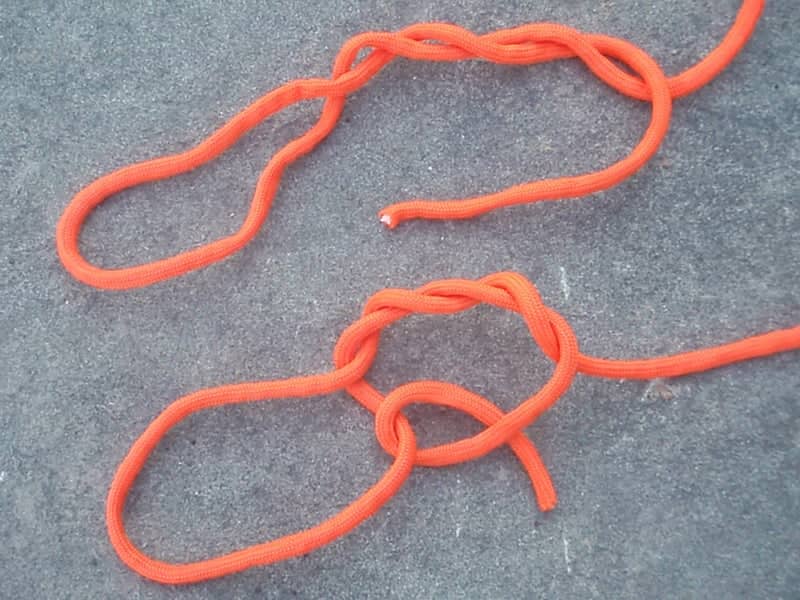 If you’re a fishing enthusiast, there are hardly better knots to know than the fisherman’s knot. It delivers a lot of friction and performs great in terms of tightening slippery lines. Although the fisherman’s knot doesn’t come in handy for lots of purposes, it’s absolutely essential for fishing hobbyists. The idea of this knot is to pass the free end through a fishhook and wrap it around the other side multiple times. Make sure there’s a bit of lubrication when tightening this knot to avoid damaging the fishing line. 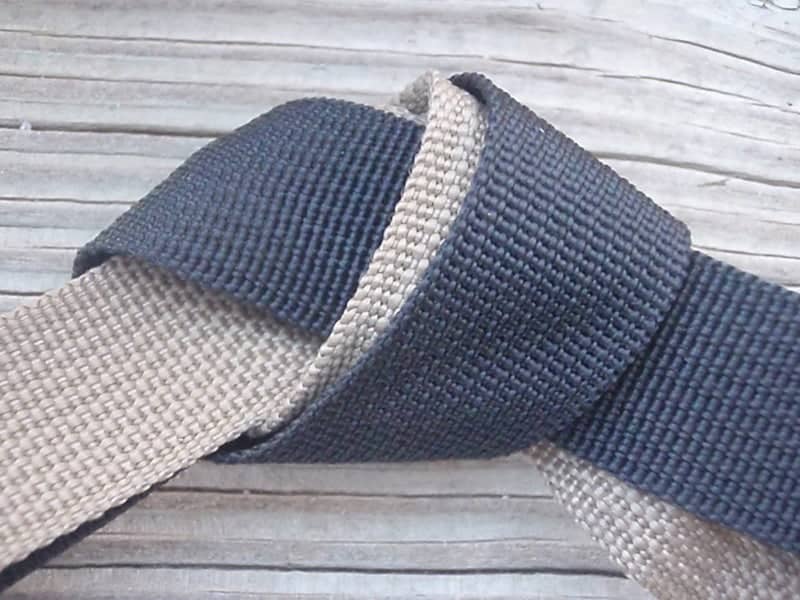 There are many situations where traditional knots fail to meet your requirements. It’s especially the case when you’re trying to connect two pieces of flat materials together. The solution comes from learning how to tie a water knot. It’s an optimized type of knot for expanding the reach of a ratchet strap while creating a secure hold. A water knot is made by intertwining overhand knots and distributing friction more evenly.

Anyone who’s into rock climbing is probably familiar with the Prusik knot. Compared to other types of knots, this one is specially designed to assist the user when climbing or descending lines. Prusik knots allow for convenient manipulation when the climber needs to create a controlled descent. At the same time, it provides great security by cinching properly. Prusik knots can be quite tough to make if you’re not familiar with more basic knots. It’s recommended to create a sufficiently large knot that’s not too loose for increased friction. 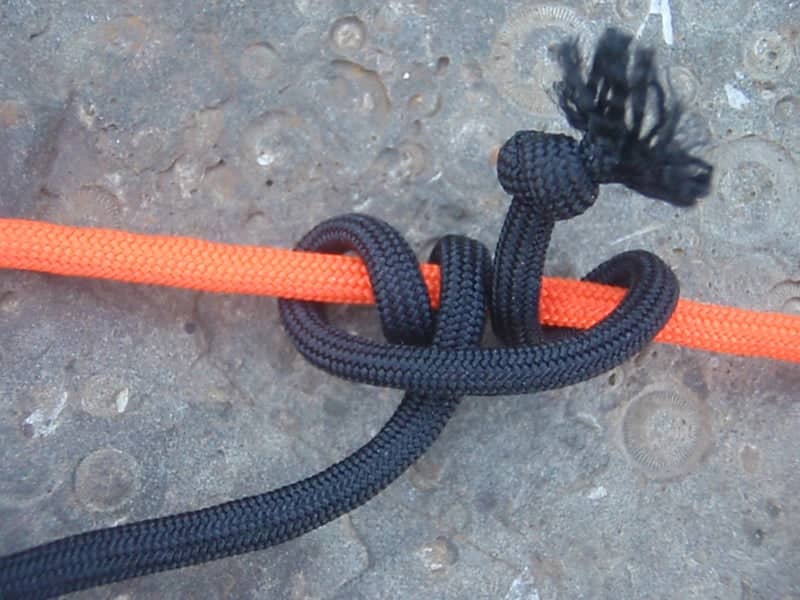 As opposed to typical knots, the rolling hitch can be considered a special technique to connect two ropes in sailing and dog sledders. It’s a versatile type of knot that’s practical for those situations when you’re dealing with thick ropes that need to be tied to thinner ones. Start by creating a half hitch to add a leg to an existing line. A second hitch is required when combining the whole knot with the final half hitch.

When it comes to anchoring things, few knots can be considered more practical than clove hitches. This knot type uses three wraps of rope to surround an object. The addition of extra wraps contributes to increasing the level of friction and providing extra stability to the line. Assuming enough tension, a clove hitch is very unlikely to slip but it’s important to add an extra overhand knot. Clove hitches are useful for anchoring camping tents or attaching objects to fence posts. 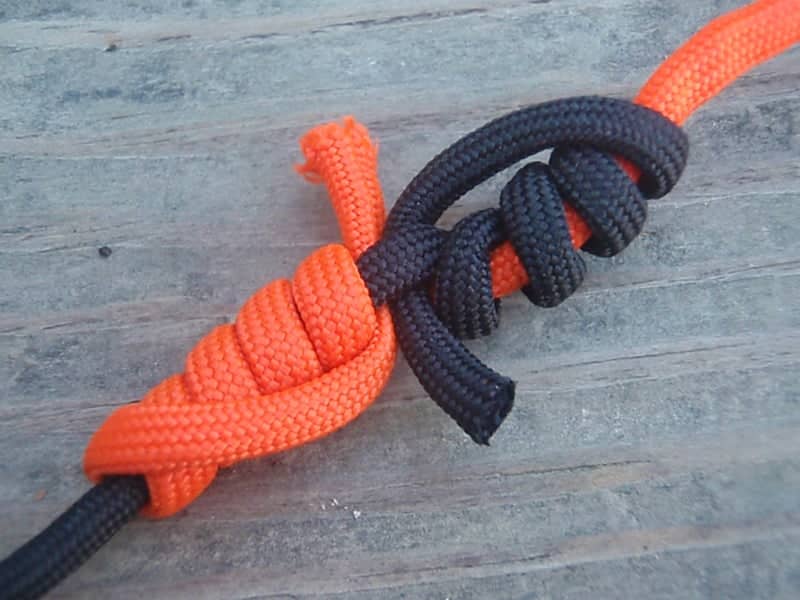 Used quite frequently in fishing, the blood knot is ideal for securing two lines. It’s created by overlapping the ropes and wrapping a free end multiple times around the other rope. The process is repeated for the opposite line with the aim of maintaining plenty of inherent strength. As opposed to similar knots, this one retains as much strength of the line as possible. The disadvantage is the requirement for great dexterity to craft this kind of knot. 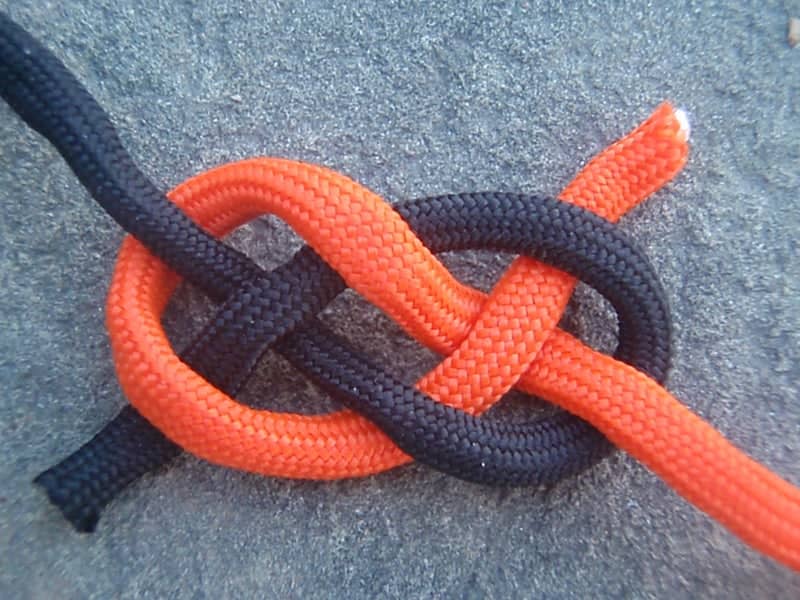 If you’re interested in connecting two lines without introducing extra untying difficulty, the Carrick bend knot could be worth a shot. It’s optimized for heavy ropes whose stiffness may often interfere with traditional knotting techniques. This knot has many nautical uses because it won’t jam even when the line gets heavily soaked with water. The Carrick bend is both functional and aesthetically pleasing considering its elegant interwoven shape.