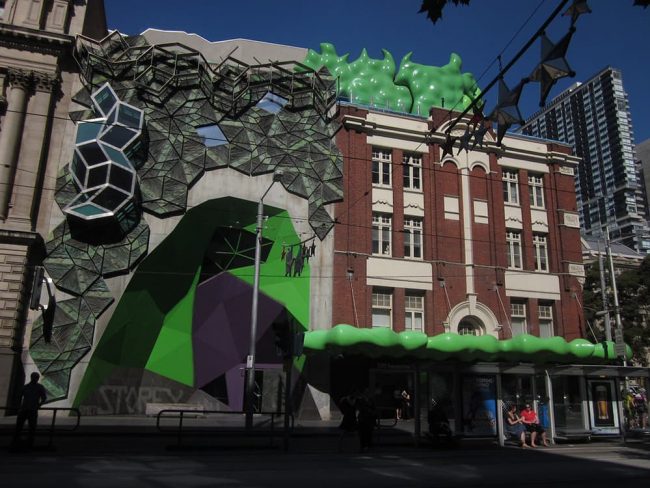 Postmodern architecture is a design style that attempts to combine various classic and modern styles to create unique art pieces that are eclectic, provocative, and memorable. Postmodernism is both a style and a movement that appeared in the 20th Century as a critical response to modern architecture. Postmodern architects disliked the formality, austerity, and rigid aesthetics of modernism so they sought to create a reaction movement focused on taking conventional beauty and taste notions and turning them on their heads. Instead of using only sleek modern materials such as glass and steel or keeping designs simple and orderly, postmodernism takes a completely different approach.

This architectural style prefers complexity and contradiction. Variety is a key aspect where modernism seems to have failed, in the opinion of postmodern architects. Buildings should have a personality of their own so gaudy ornamentation and lack of uniformity can be considered some typical elements of the style. Rigid doctrines are abandoned in favor of more emotional, witty, or ironic takes. Understandably, postmodern architecture also attracted a lot of criticism. It can be challenging to see the beauty of some postmodern buildings unless you’re familiar with this kind of architecture. The blend of different styles can easily appear kitsch and camp.

Take a look at some of the most important examples of postmodern architecture if you’re interested in this design style. 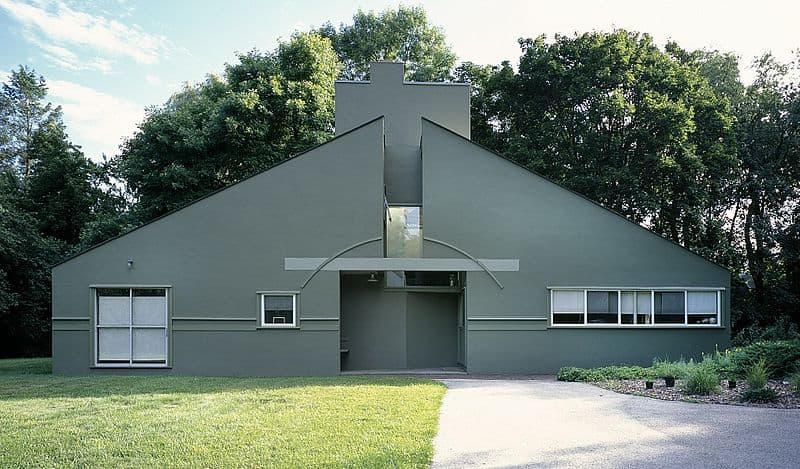 This is an iconic postmodernist work that can be found in Philadelphia in the United States. The house was designed by the famous architect Robert Venturi in an unconventional style offering an unusual sense of scale and featuring a broken gable roof. Through the distorted vision of the architect, the Vanna Venturi House started an important postmodernist movement by challenging the Modernist orthodoxy at the time.


This building was completed in 1964 and worked to illustrate Venturi’s architectural ideas described in his anti-Modernist polemic. There were multiple versions until the final design of the house was fully completed. The redesigns were necessary as the architect sought to bring to life his postmodern concepts in a way that truly embodies the ideas written in his book. 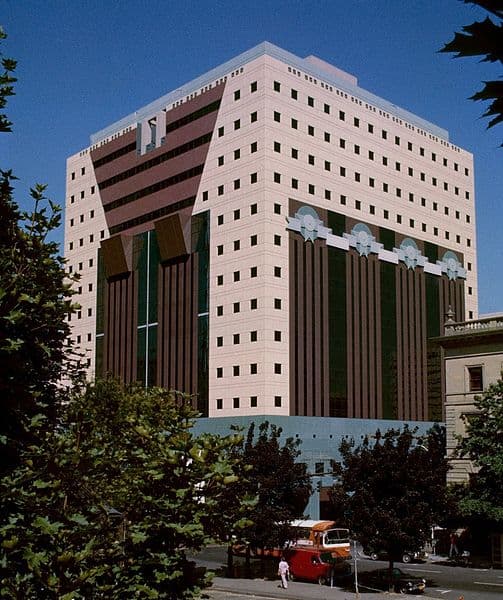 Thanks to using a mix of materials and colors, the facade of the building has a particularly distinctive appearance. There are many interesting details that were considered innovative at the time. Some examples include the small windows and decorative embellishments. The Portland Building is an iconic postmodern work because it was a pioneering building designed in this architecture style. It rejected the Modernist principles and was a successful design for an office building making the downtown area feel fresher and less boring. 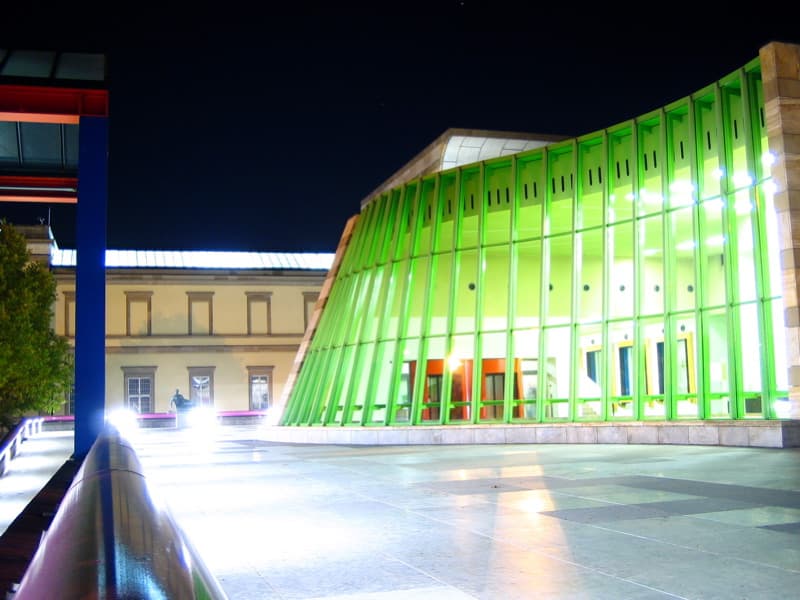 Located in Stuttgart, Germany, Neue Staatsgalerie is a famous building that’s widely considered the epitome of Postmodern architecture. It embodies the main defining characteristics of the aesthetic. The most prominent feature of the building is the blending of overt neoclassical elements with the typical Modernist concepts at the time. Its construction began in 1979 and finished in 1984.


An important reason that helped Neue Staatsgalerie gain recognition as a postmodern work was the focus on the critical initial stage of the architectural style. There’s a very harsh contrast created by the warm travertine and sandstone materials that feature classical forms with the metal framing system and vibrant colors that offer a distinctive industrial vibe. The essential idea of the architect was to combine monumental with informal aesthetics. This is most clearly emphasized by the central open-top rotunda of the building. 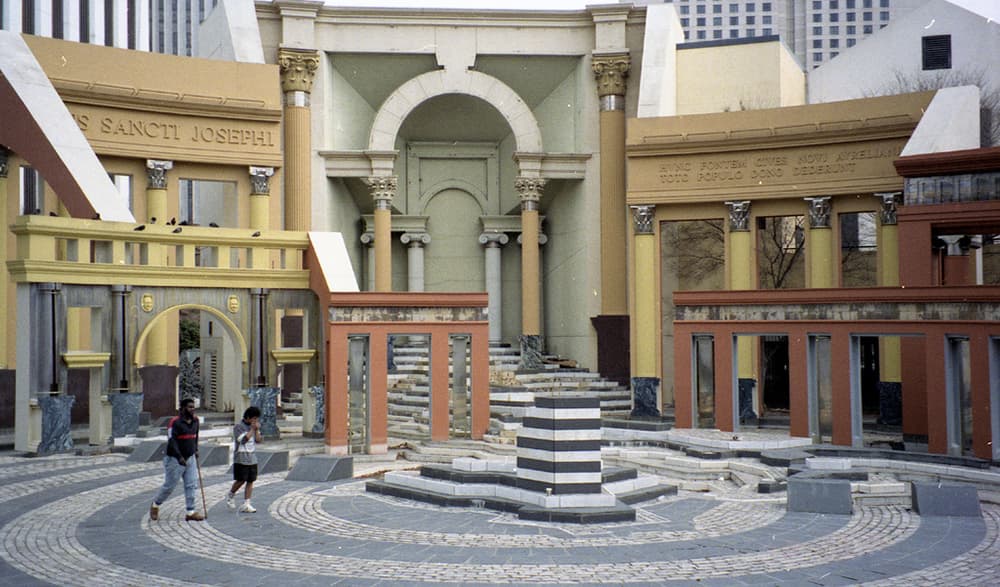 A key figure for postmodern architecture, Piazza d’Italia was completed in 1978 using the design concepts of Charles Moore. This is an urban public plaza located in downtown New Orleans. While lots of artists and architects considered it a notable work of art when it was constructed, citizens never really frequented it and the area started to deteriorate because the surroundings were never completed according to the initial plans.

Piazza d’Italia was considered the first “postmodern ruin” until 2004 when it has been fully restored thanks to development progress for the surrounding buildings. The plaza was originally created to commemorate the contributions to the city of the Italian immigrant population. The structural design involved a central fountain with surrounding colonnades, arches, and a clock tower. The postmodern vibe comes from the use of modern materials such as stainless steel to create an artistic expression of classical forms. 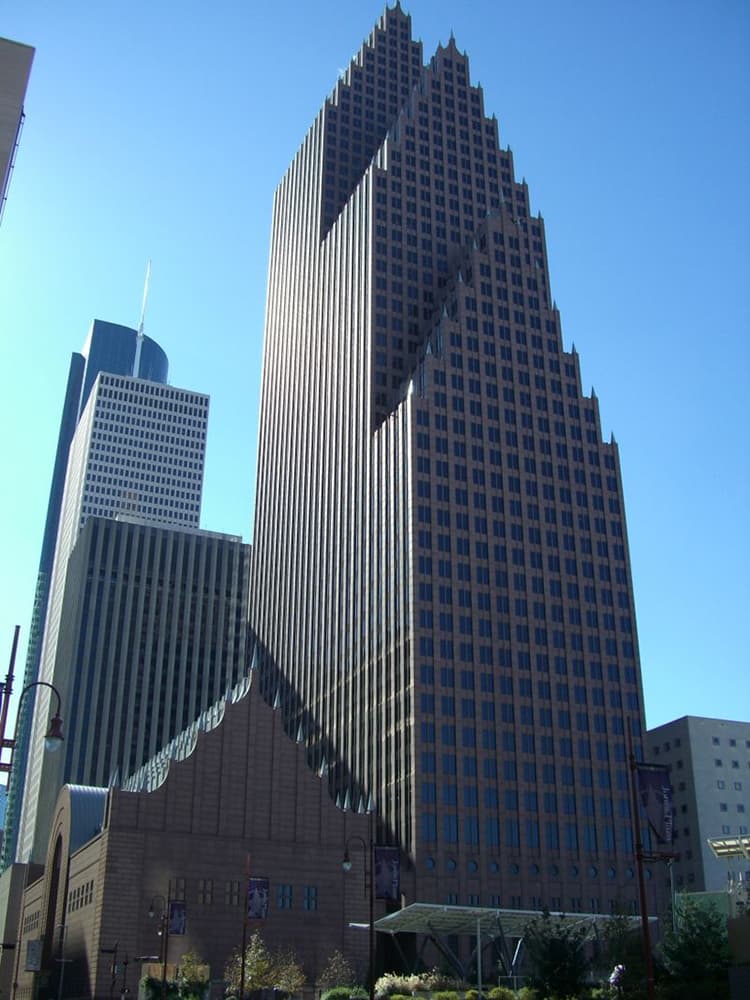 Now known as the TC Energy Center, this is a fundamental example of postmodern architecture. The Bank of America Center was finished in 1983 and used the design of an important postmodern architect, Philip Johnson. Although it’s a singular building that reaches an impressive height of 780 feet, it’s actually fragmented into three towers.


There’s a strong gothic and medieval influence on the roofing’s design. It’s a very unusual style to see in a functional building with strong Dutch Gothic canal house inspiration. The spires on the roof contribute to the distinctive visual impact of the building. While it used to serve as a significant banking center, it’s now renamed after becoming the main US headquarters of TC Energy corporation. This classic work of postmodern architecture is found in Houston, Texas. 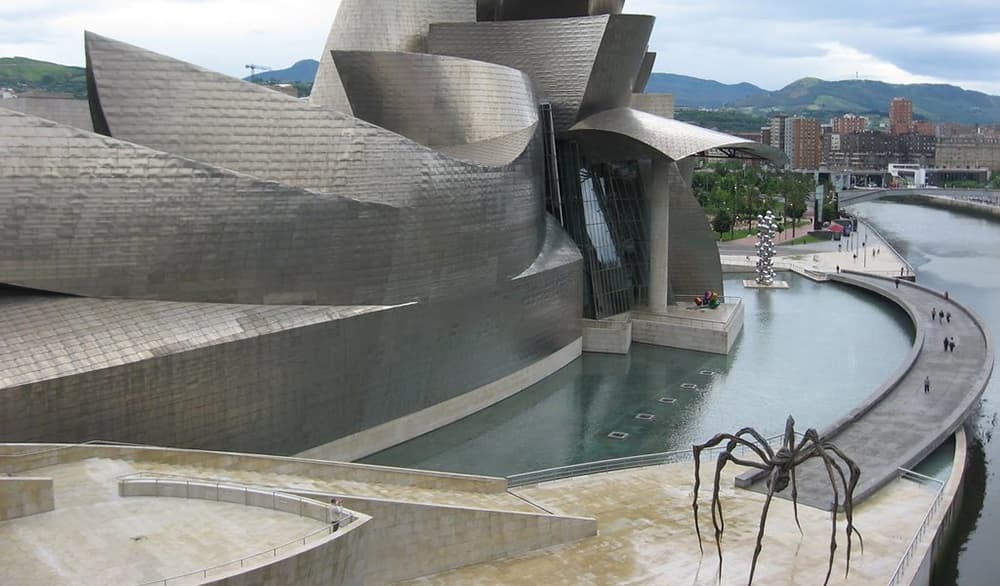 Designed by major postmodernist architect Frank Gehry, the Guggenheim Museum Bilbao shows off many interesting details that illustrate the aesthetic concept of the postmodern movement. This is a highly innovative building that features daring curves built using durable titanium. Gehry didn’t intend for this museum to be labeled as postmodernist but the way traditional notions have been altered makes this an incontestable work of this design style.

The Guggenheim art museum is located in Bilbao, Spain, and is built along the Nervion River. It’s safe to say that its curved forms that appear random make this building stand out even among other art museums in the world. It’s a fundamental work of deconstructivism, a separate tendency of postmodernism. Many architects and critics around the world consider this building a masterpiece, especially when taking into account the way the design of the museum has been so seamlessly incorporated in the ancient industrial area of the city. 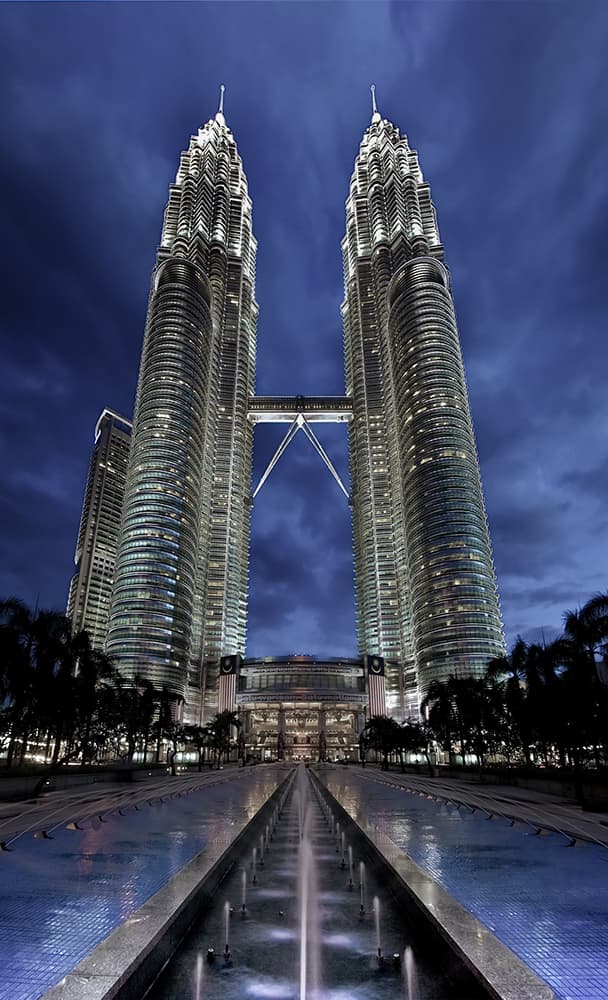 An excellent example of postmodern Islamic architecture, the tall Petronas Towers in Kuala Lumpur, Malaysia represent a major landmark in the area. The twin towers were designed by renowned Argentine architect Cesar Pelli. Although it appears to feature a typical skyscraper design with lots of modern elements and materials, there’s a considerable Islamic influence that transforms its appearance with postmodern flair.


The buildings are built using a steel and glass facade that’s been masterfully decorated with Islamic motifs to create a distinctive look. In terms of structural engineering, the Petronas towers rely on an ingenious tube-structure that was quite revolutionary at the time of their construction. The use of reinforced concrete helps to consolidate the strength of this kind of extremely tall building. 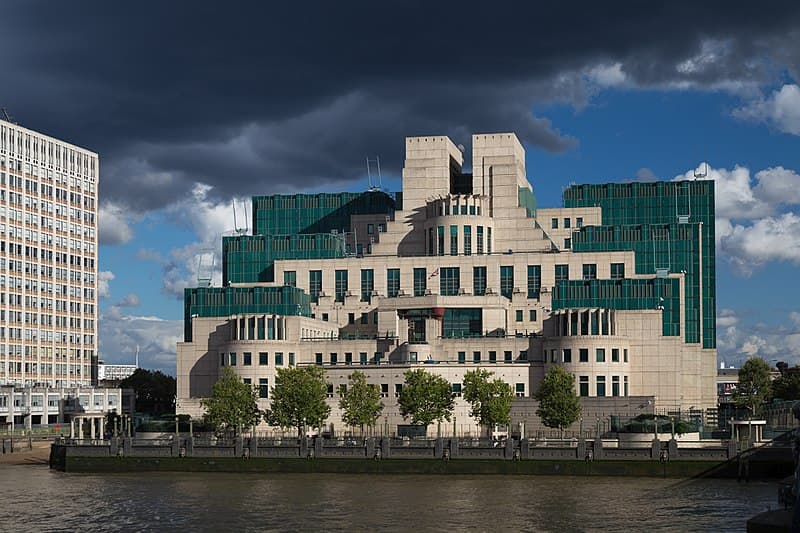 The headquarters of the UK’s foreign intelligence agency represents a significant building for European postmodern architecture. It can be spotted on the bank of the Thames river in London. The architect Terry Farrell designed the SIS Building using an innovative layered approach by creating many distinctive roof areas. More than twenty types of glass have been integrated into the construction process for the building.

Considering the intended role of the building, security is a critical aspect where no compromise was made. For example, the windows are triple glazed and a significant part of the building is constructed underground. Two moats are added for additional protection. Due to its postmodern architectural details, the SIS building has been criticized as an uninspired attempt to mix a sense of humor with formal and functional elements that give it a serious vibe. One important source of fame for this postmodern building is the multiple features in James Bond films. 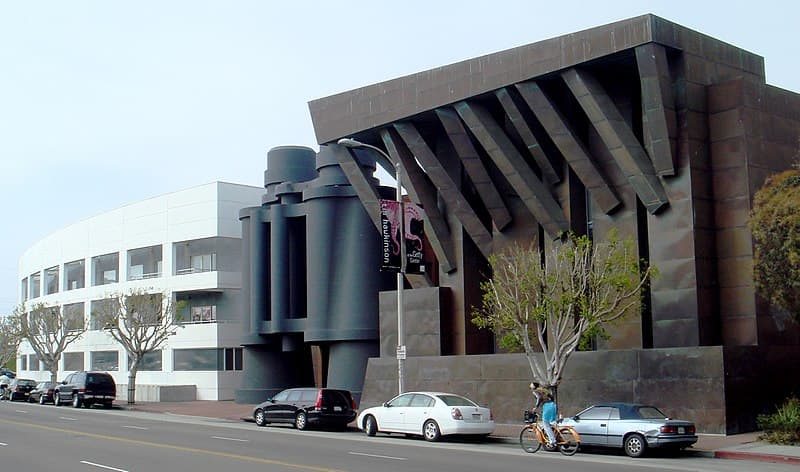 Originally built for the advertising company Chiat/Day, this postmodern work is now unofficially known as the Binoculars Building. It’s located in Los Angeles, California, and shows off a large sculpture shaped to resemble binoculars. This impressive artwork serves as a memorable highlight of the building because it also accomplishes a functional role as the entryway.


There’s a notable camp influence seen in the design of the Binoculars Building. Aside from the massive sculpture, the building itself has a fairly unusual look as well. It features the signature design of architect Frank Gehry that employed his own brand of deconstructivism to create an organic appearance that’s both creative and whimsical. While the architect’s work is spread out in various areas of the city, the Binoculars Buildings stands out as a fascinating example of postmodern architecture.

10. Wexner Center for the Arts 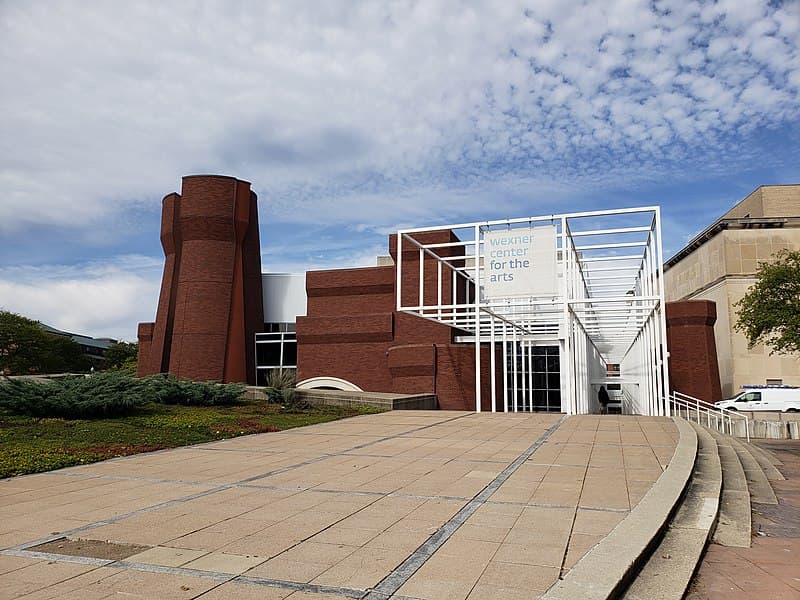 Serving as both a lab and a public gallery, the Wexner Center for the Arts in Columbus, Ohio deserves an important mention on this list of famous postmodern works. The building was inaugurated in 1989 and shows off some important principles of the postmodern movement in architecture. It’s designed to illustrate fragmentation and contradiction by combining various materials and styles resulting in a unique look that inspired many later works.

A prominent element of the Wexner Center is the large, white structure that seems to resemble scaffolding. It seems to suggest the idea of an incomplete design that’s in line with the deconstructivist mantra. Another notable design detail is the brick turrets in the center that appear to be inspired by medieval armory. The architect took the mismatched street grids of the campus into consideration to make an aesthetic statement while sacrificing functionality.