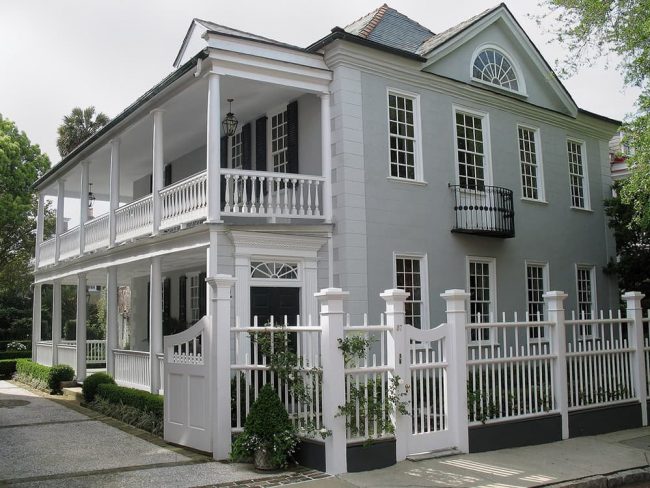 The Charleston architectural style originates from the large South Carolina city with the same name in the United States. The downtown neighborhoods of Charleston offer a rich selection of historic buildings featuring the trademark characteristics of this style. It’s not just defined through the architectural details but also the stories told by these homes. Charleston is sometimes referred to as the Holy City. It’s a real treat for anyone with a passion for architecture because you can observe the traditional southern design type.

Charleston is an iconic American city due to its role in the country’s history. It was founded in 1670 and gets its name from King Charles II of England. The architectural building style appeared quite early considering this period of the United States. There’s no exact date when the first Charleston-style houses appeared but it’s safe to say that a major construction boom in the 1700s contributed to defining the architecture of the city.


Single and double houses became very popular in this time and constructions lasted for almost two centuries until around the 1890s. The city of Charleston has now approximately 2,800 buildings featuring this characteristic architecture despite the fact that more than 4,500 were originally built. To be able to see a classic Charleston-style building, your only option is to visit Charleston because other Colonial homes throughout the southern area lack the traditional elements that define it.

Both single and double Charleston-style buildings can be properly identified by looking for some essential architectural elements. Double houses aren’t as common as single ones so we’ll take a close look at their defining characteristics to figure out what makes Charleston architecture such a treasured part of the city’s history.

Although the house seems to have a typical front door, it’s actually only an entrance to the home’s porch or piazza. Charleston-style houses have the real front door further inside the building, a style that’s believed to have originated from the Victorian era when privacy was a much greater concern for the residents. Speaking of porches, Charleston homes tend to have this feature on the long side of the building to benefit from a cool breeze.


Another essential element of the Charleston-style house is its long, narrow shape. This is caused by the traditional limitations of the past when the land of the city was separated into long, narrow lots. Builders preferred making the long side of the home the real front of the house while the narrow part was just a facade. Single houses in this style usually have one very wide room due to the layout of the building that involved a longer side. Despite multiple influences that help to differentiate the exteriors of many Charleston-style homes, the interior layout is usually extremely similar from house to house. 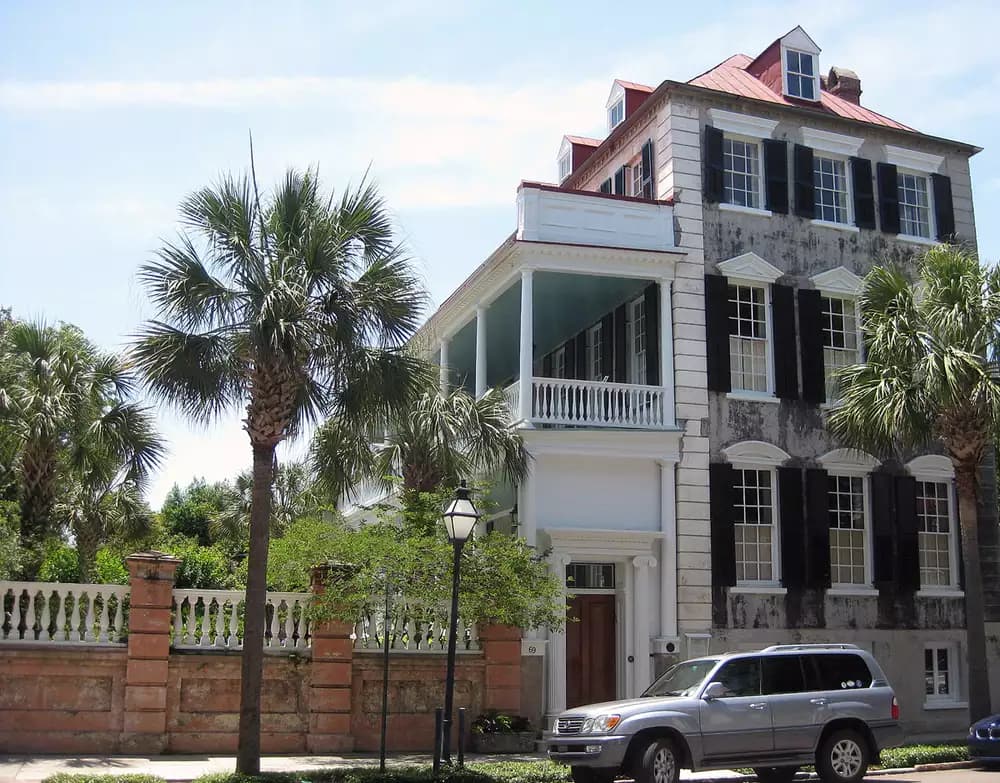 This is a notable example of a Charleston-style single house that dominates the Historic District of the city. Notice the street-facing door that provides entrance to the piazza. 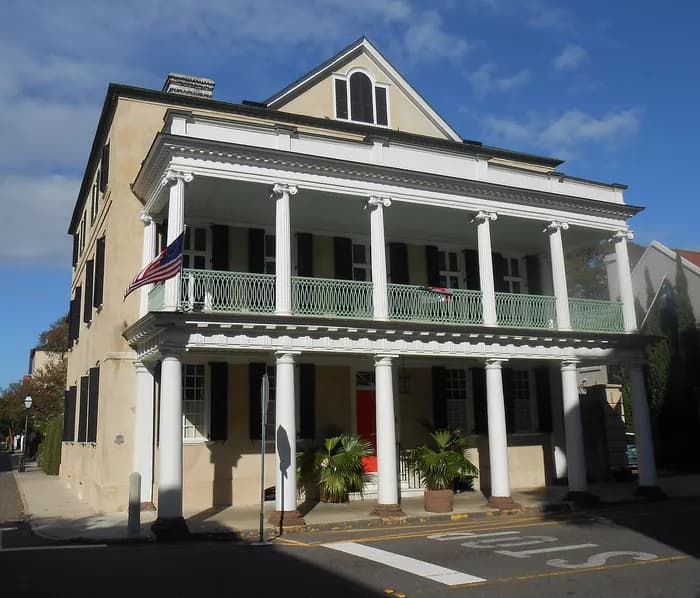 While not as interesting as single houses, double houses are still architecturally significant for Charleston. Take a look at this home that faces the street at full length. The building has a total of four rooms on each floor. 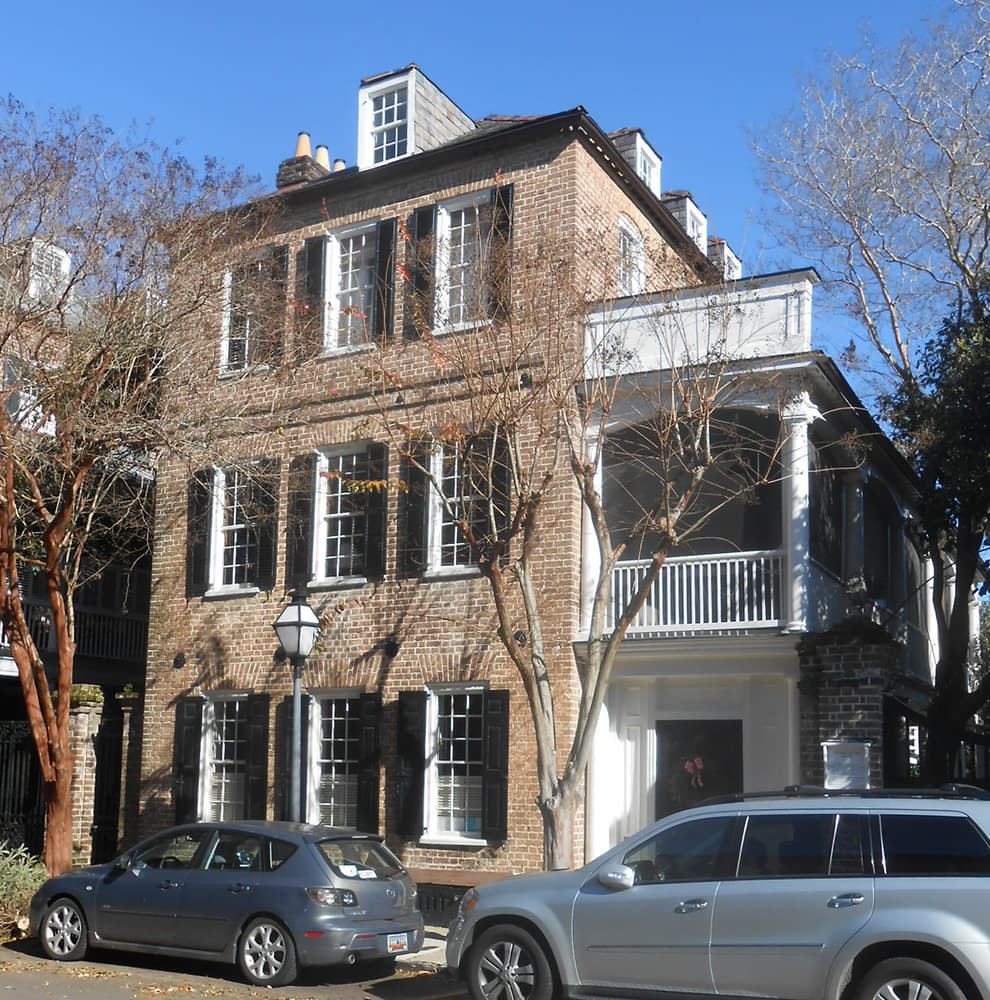 Georgian architecture is one important style that’s been adopted in Charleston. Here’s a great example of early Georgian influence that has been carefully accommodated to the narrow lot. This home used to have an adjacent house as well but it’s no longer standing. Instead, the owner preferred to take advantage of some extra space for a walled garden. 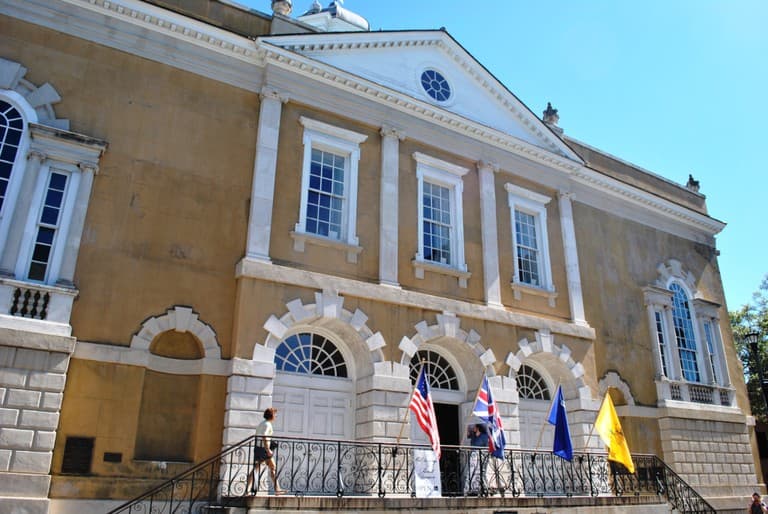 The Old Exchange building in Charleston shows off some typical Colonial architecture characteristics. This is a very elegant and formal style that’s ideal for an administrative building that performs various civic functions. In modern times, this building works as a museum. 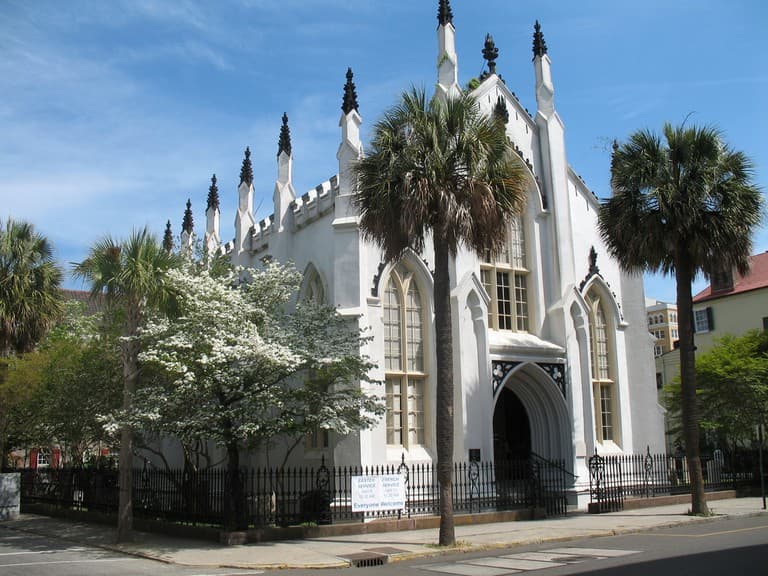 Drawing inspiration from medieval Gothic architecture, this style had some influence on the architecture of Charleston, especially when it comes to churches. The Huguenot Church is an ideal example of Gothic Revival. 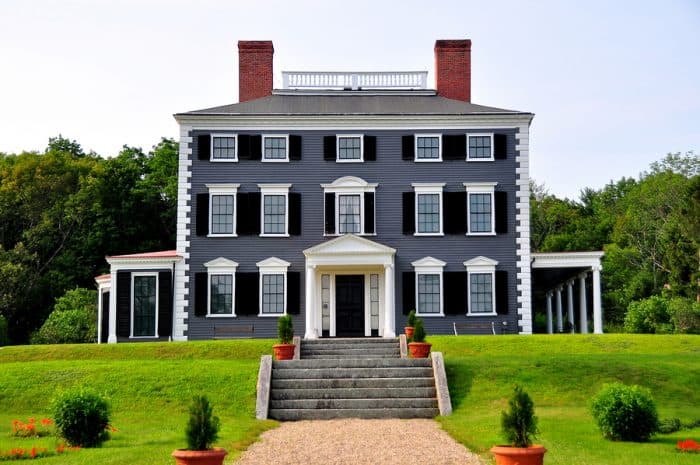 Similar to the expansion of Georgian architecture, there was considerable growth for the popularity of Federal elements integrated into the Charleston style. Some European influence remained in the architectural world despite America’s strong determination to gain its independence. 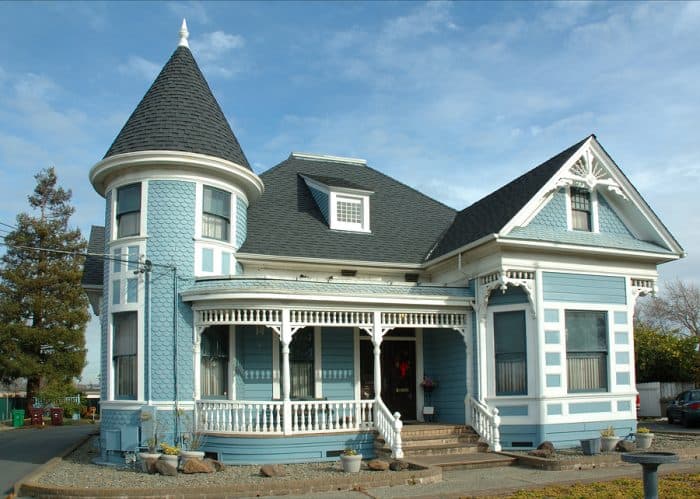 Also known as the Queen Anne style, Victorian buildings with their complex roofs and colorful exteriors flourished in Charleston. Many luxurious mansions in this style can be found in select locations of the city.

The revival of classical architectural elements has made a lasting impression on many landmark buildings in Charleston. This style has great potential to transform the building into an ancient temple. Check out the Fireproof Building that’s considered an influential example of neoclassical Charleston-style architecture. 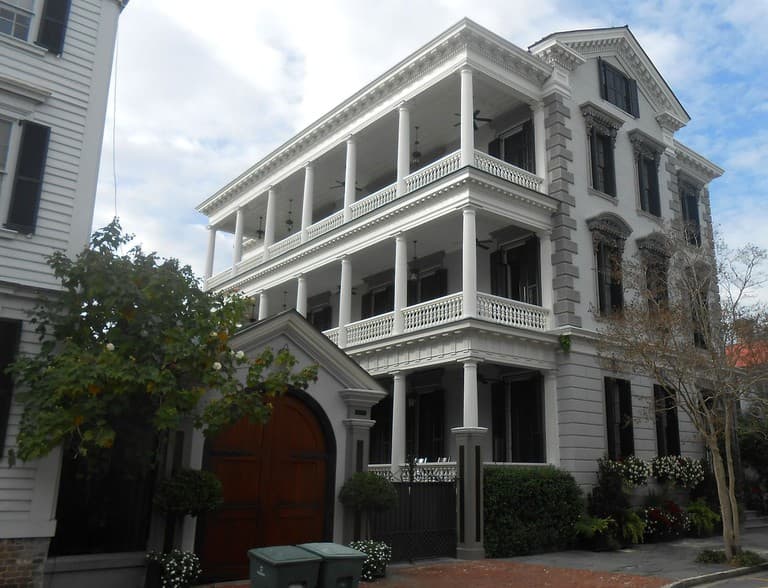 The same period that saw a notable rise in popularity for Gothic Revival has created the perfect conditions for the advent of Italianate style in Charleston. There are various great examples of this historic design but the Patrick O’Donnell house represents a notable one with its cupolas and rectangular shapes. 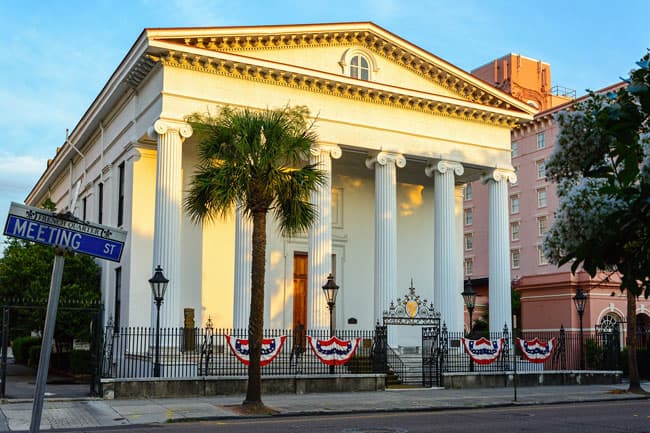 Greek Revival buildings focus on classic ornamentation and standout elements such as massive Ionic columns. The Hibernian Hall in Charleston is a prime example of Greek Revival influence. 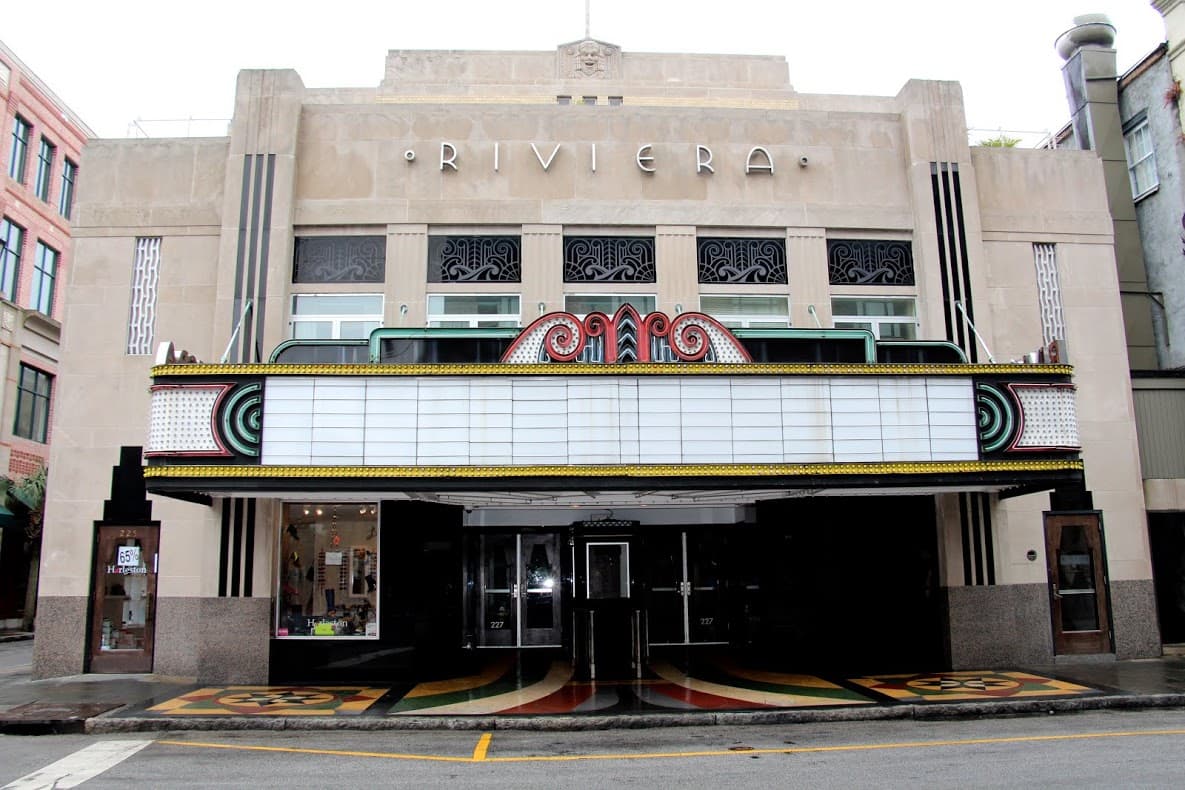 Charleston is also home to more modernist styles such as Art Deco. There’s no better example than the Riviera Theater with sleek and practical design elements. It encapsulates the 1920s when buildings were designed to emulate the sense of carefree prosperity of that era. 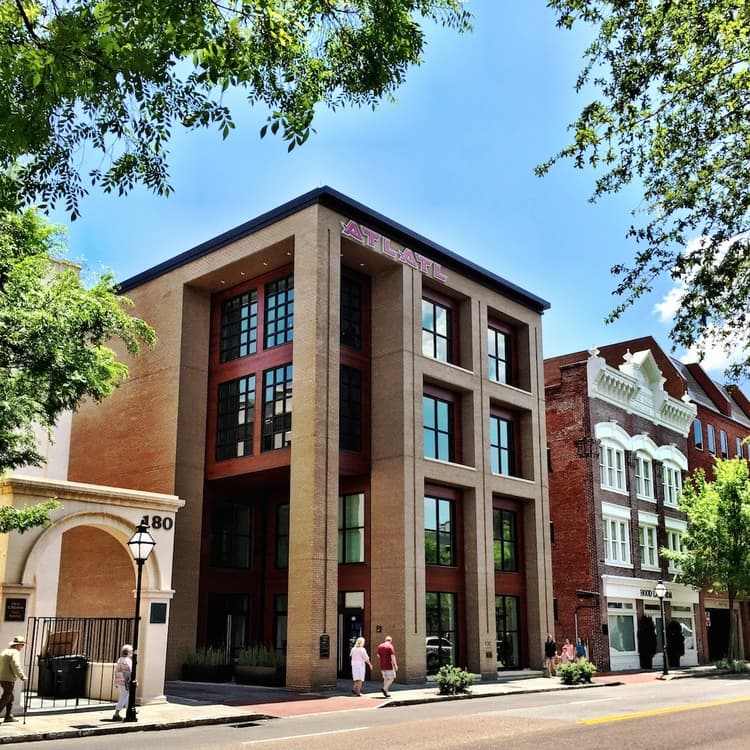 While traditional Charleston architecture steals the show for most visitors, modern buildings can still capture some iconic features of the design style while putting them into a new light. This new building has some interesting proportions and plenty of modern elements to grab all the attention in Charleston.