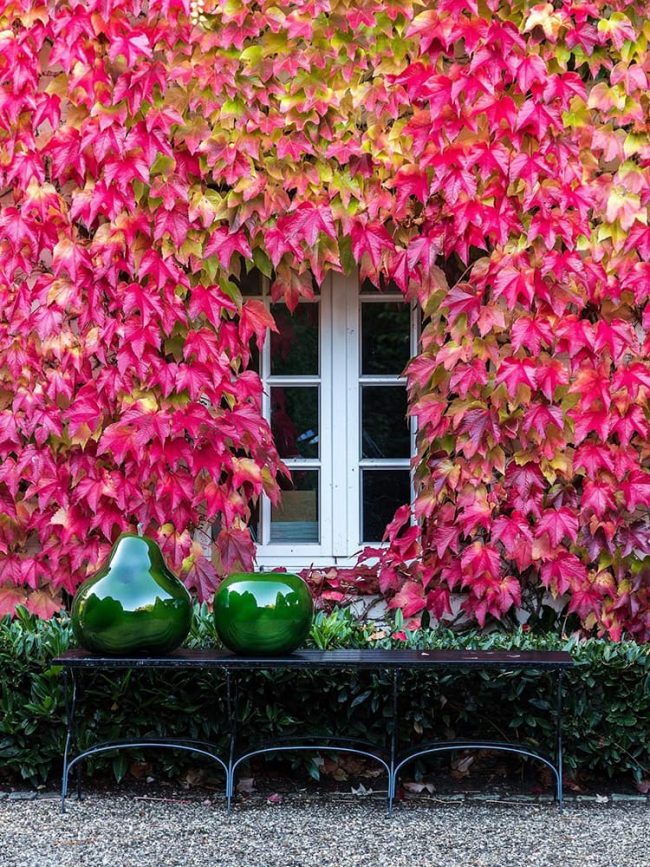 They say the world is full of freeloaders who like to hitch a ride for free, but when it comes to the garden, sometimes it’s the freeloaders who are the most glorious. Gardeners have long known that climbing flowering plants can reach where other shrubs and bushy plants cannot, draping entire cottages and hills with fragrant blossoms and attracting hordes of butterflies and hummingbirds.

The flip side of the glory is that the best climbing plants are bullies and invaders. Unless you have a firm hand and are alert to their intentions, they can overwhelm your little acre of green. In just a season the eye-candy can turn into an eyesore.

Here are some of the best climbing plants you could have in your garden, all things considered. 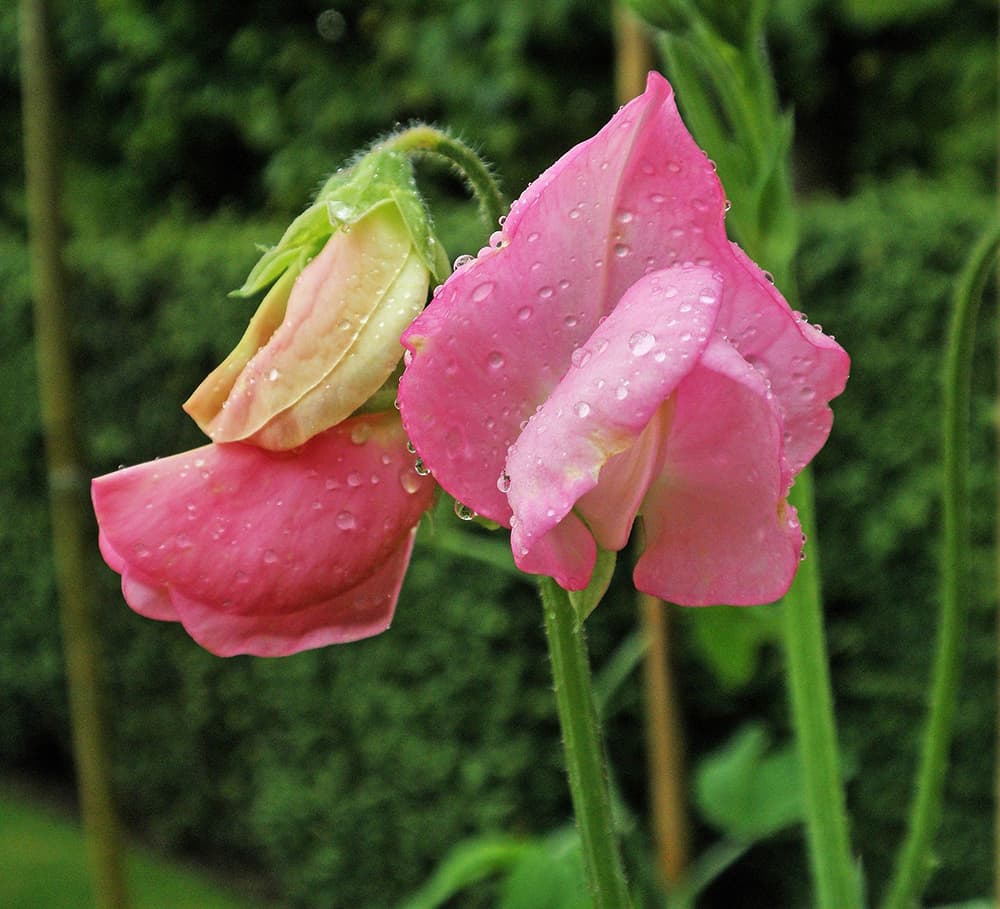 This floral sensation fills your garden with its sweet fragrance. It’s self-seeding and will give you pleasure year after year. It’s deer-resistant though bees and butterflies love it. It can reach heights of eight feet or more but looks equally cosy in a window box or as a border. In florigraphy, they symbolize bliss, pleasure and positive experiences. No wonder the Sweet Pea (Lathyrus odoratus) is one of the world’s most beloved climbers. 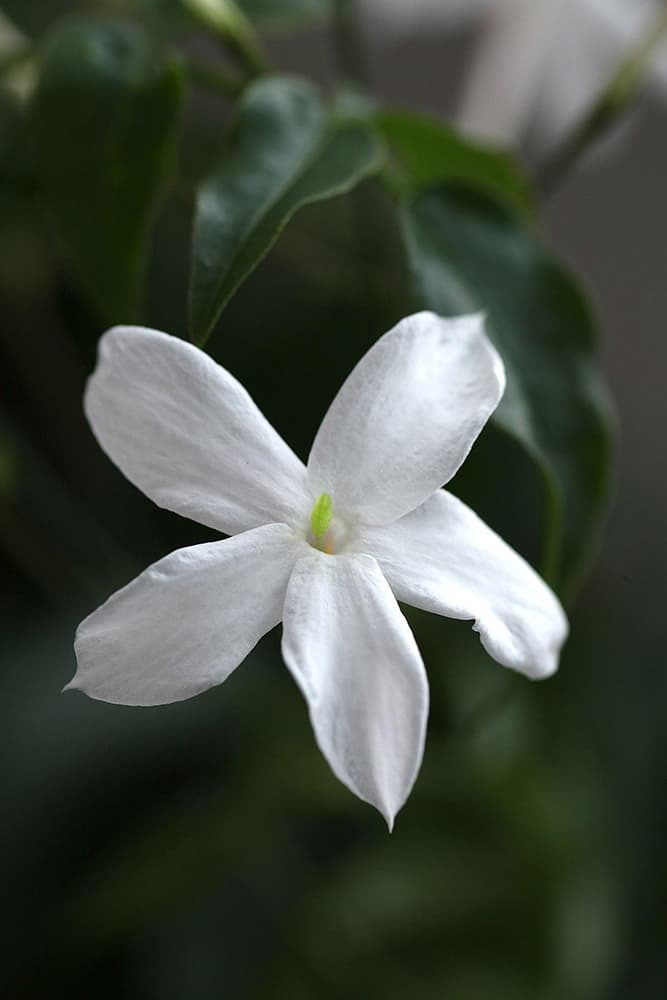 You’d be hard put to find someone who doesn’t like the seductive, bewitching fragrance of the jasmine flower. It’s the reason why the jasmine (Jasminum oficinale) is one of the most popular climbing plants in the gardens of temperate countries. It doesn’t require much care except right at the beginning. It needs watering once a week and is easily trained.


You might know it better as the fragrant and subtle aromatherapy massage oil. Extracting the oil of jasmine, known as the ‘King of Oils’, is a demanding process. The flowers must be picked after dusk, since they release their perfume only at night. The oil is extracted in tiny amounts, which makes it one of the more expensive oils around. 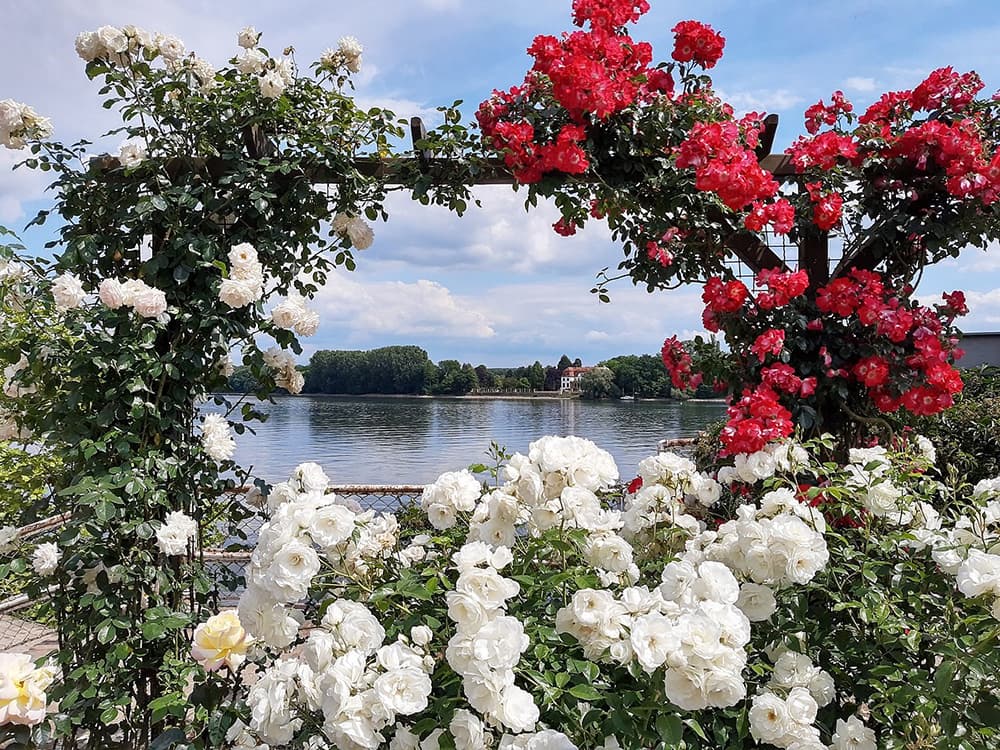 It’s not difficult to get confused between Climbing Roses and Rambling Roses. But one key difference is that ramblers bloom just once, producing a lot of small flowers in sprays. Climbers are more manageable, will flower repeatedly over summer and fall. Ramblers can be rowdy but climbers require more attention.


But Climbing Roses are more social and easier to train. They will happily make friends with your trellises and arches, hugging walls and windows, reaching heights of 12 feet or more. Best of all, they will cast their uniquely fragrant spell all over your garden. 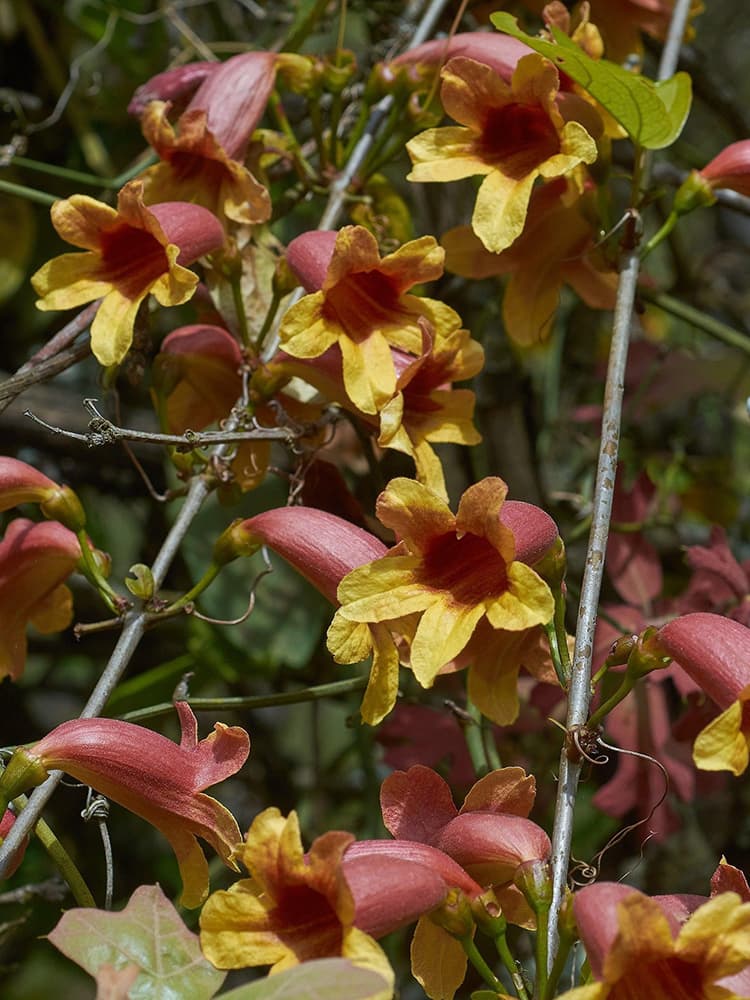 You might like the flowers of the Crossvine (Bigonia capreolata) because they smell like a well-made mocha. It’s a robust climber and can reach lengths of 50 feet with no help. It doesn’t need supports, and can use the ‘holdfasts’ (adhesive pads at the end of its tendrils) to cling to just about anything — stones, bricks, walls, fences, trellises. It might very well be the most prolific climbing vine you could have — some say it produces more flowers per square inch than any other vine.

It requires little care, is practically immune to pests and diseases, does not requires spraying, and only needs a little pruning from time to time to keep it looking presentable. What’s not to like? 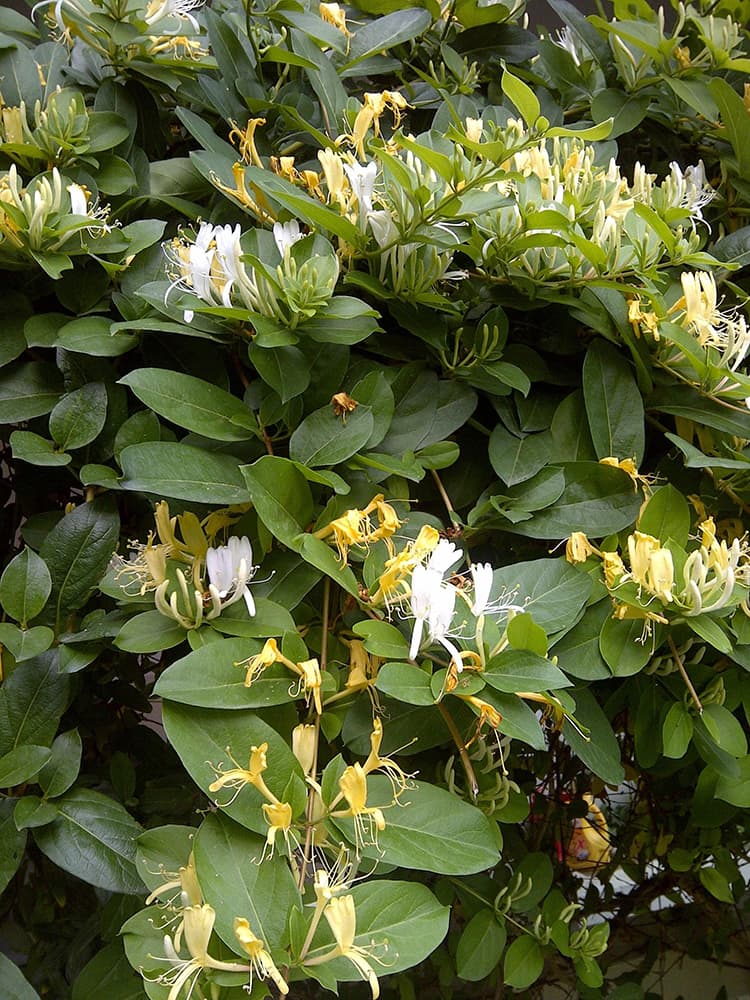 There are over 180 species of Honeysuckle (Lonicera) and many of them are gorgeous, fragrant and a magnet for hummingbirds, butterflies. — and little Japanese children. The Japanese honeysuckle is edible and rich in calcium, magnesium and potassium. After plucking the flower, Japanese kids tug the stem at it narrow end, gradually separating the entire insides of the flower from the petals. Then they’d suck the sweet nectar out of the long skinny tubes. Honeysuckle vines can be boiled and eaten like vegetables, and their flowers boiled and used in syrups or puddings.


A Greek myth explains how the honeysuckle became an all-summer season. Daphnis and Chloe were long-distance lovers who were only allowed to see each other while the honeysuckle was in bloom. Frustrated, Daphnis asked the god of love if he’d mind letting the honeysuckle bloom for longer than a season so that she could be with her boyfriend longer. So that happened. 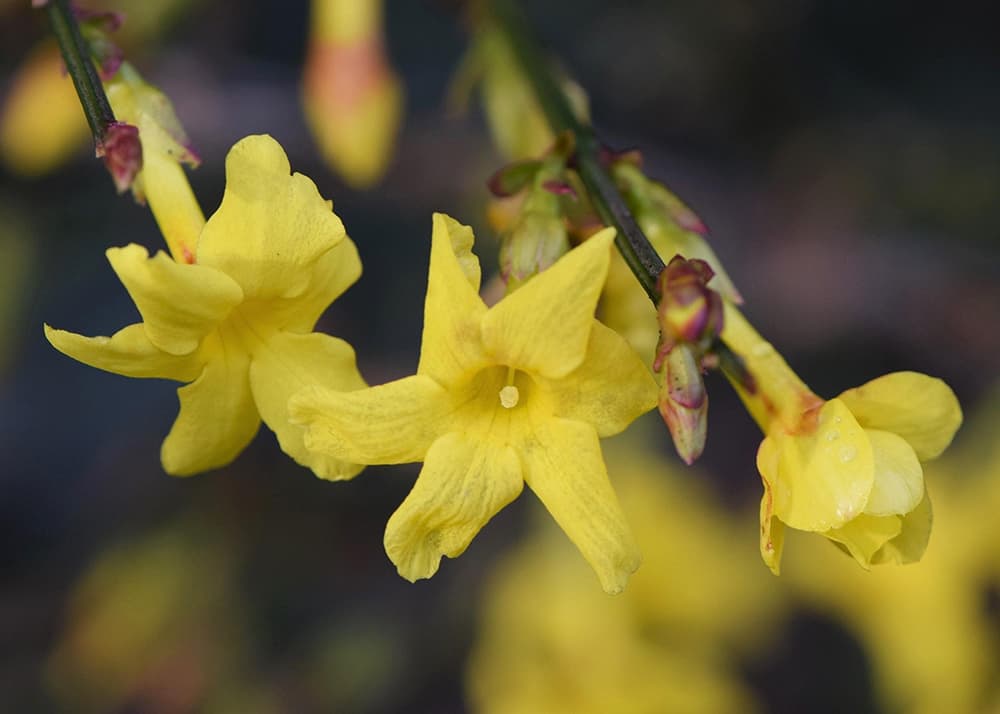 Welcome to the flower that welcomes spring — at least that’s what the Chinese name of the Winter Jasmine, Yingchun, means. It’s strictly not a climbing plant but many gardeners treat it as one. It loves to scrabble over open ground, forming delightful ground cover with yellow-white flowers. Train it against a wall and it will hold to the structure and climb all over it. It’s just a clingy, affectionate plant. 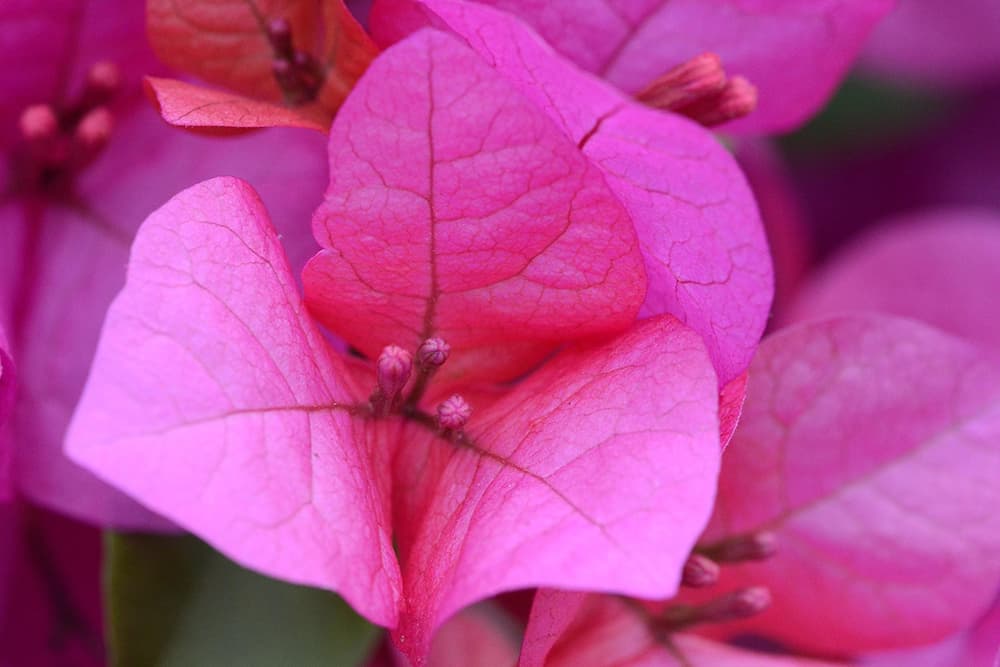 Back in the 1700s, when women were not allowed on ships, Jeanne Baret disguised herself as a male to be with her lover, the botanist Philibert Commerce, on his journey to circumnavigate the earth with the admiral of the French navy, Louis Antoine de Boungainville. You know how the story ends — they saw a plant they’d never seen before and called it, after their host, Bougainvillea (Nyctaginaceae). Jeanne Baret was possibly the first person to see one, though it was Philibert who described it.


These vibrant, colorful climbers go everywhere. They will twine around the branches of tall-standing trees until you wouldn’t be able to tell the climber apart from the tree. They make great ground cover for hillsides. 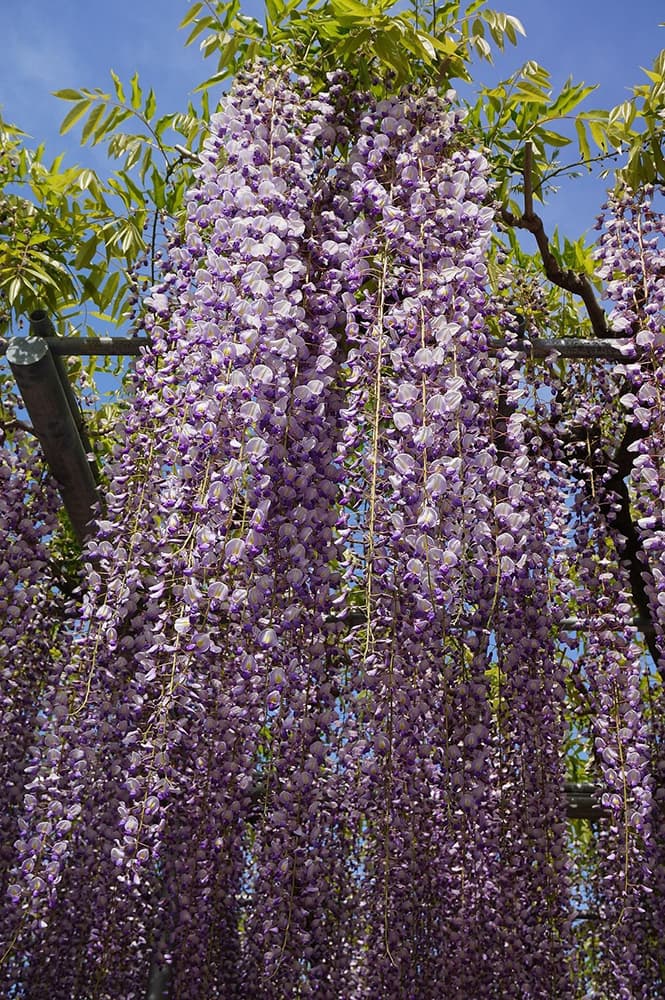 The Japanese Wisteria (Wisteria floribunda) traveled from Japan to the United States around the 1830s. Today it is one of the most romanticized of flowering garden climbers, with its white, pink, violet and blue flowers. It has been sung about, written about, and glorified. With its clockwise spiraling stems, it can ascend to dizzying heights of over a 100 feet.

It has been used to cover bedding linen, the most famous of them being Schweitzer Linen’s Wisteria Lane bedding collection. It’s a flower that makes you wait, like a demanding lover, and can sometimes take three years or more to bloom. Some gardeners have found that willfully damaging half its roots shocks it into reproduction.

The Wisteria symbolizes long-life and immortality. There’s one in Japan that’s 1200 years old and still standing — and spreading its intoxicating fragrance over the countryside. 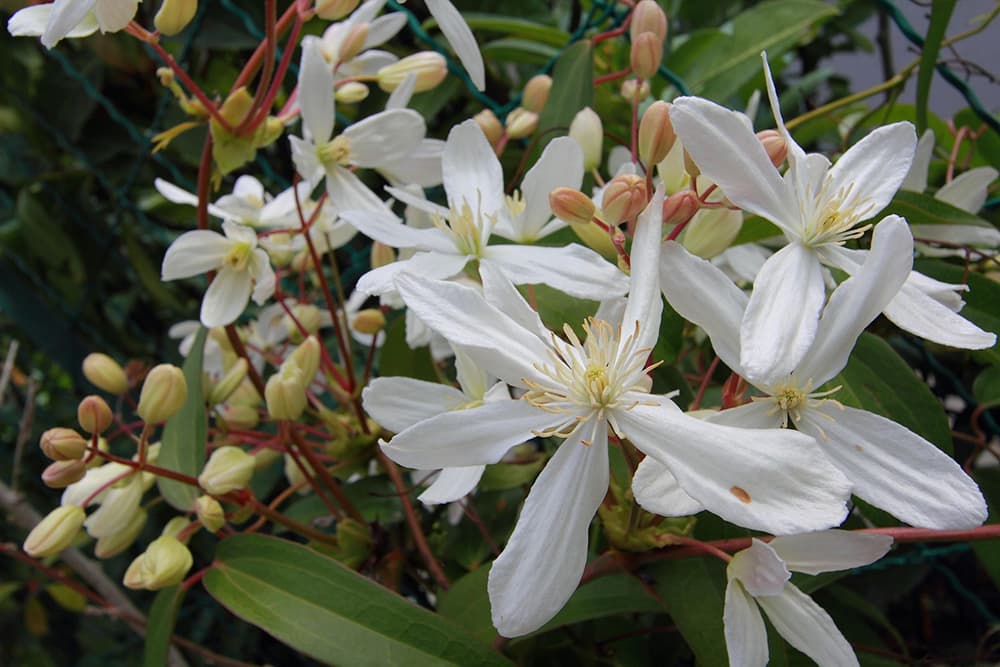 The Apple Blossom plant (Clematis armandii) is one of several climbing plants that like to climb all over other plants. Sometimes the result is dazzling and other times just comical. But at all times, the fragrance of its showy flowers is heavenly. The plant is native to China, where it was named after a Jesuit missionary and plant collector, Pére Armand David.


Although it is a gorgeous climber, it is also high maintenance. Keeping it disciplined and within bounds is best left to the hands of an able, green-thumbed gardener. 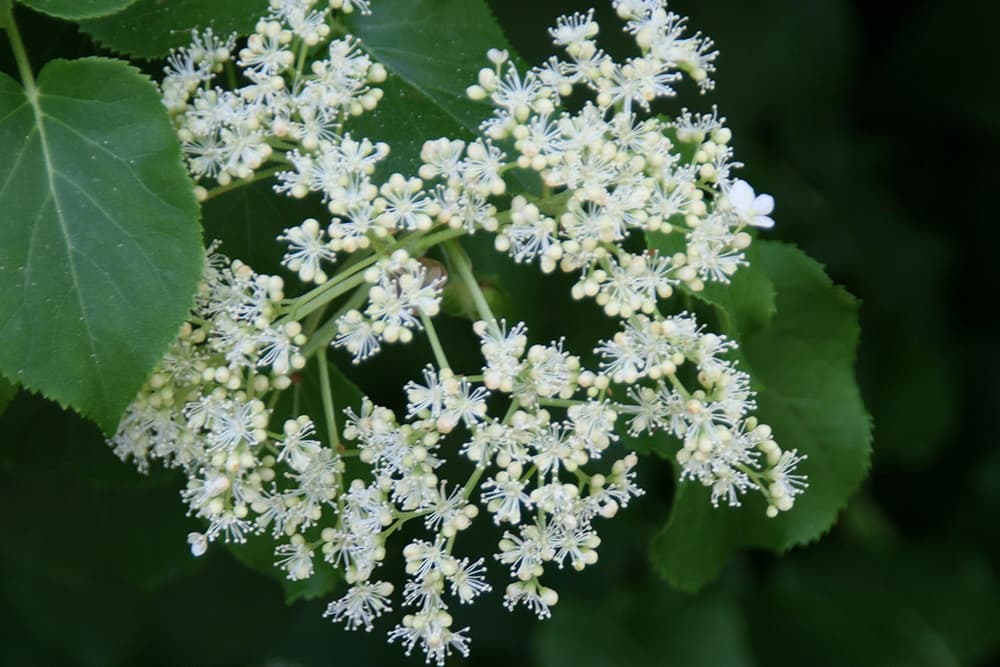 They can look quite stunning, climbing over trees, archways, trellises, pergolas, and fences. The Climbing Hydrangea (Hydrangea petiolaris) adds an ineffable something wherever it spreads, and at its best, can reach heights of up to 50 feet and produce clusters of lacy, subtly fragrant white flower when summer kicks in.

The vines can get heavy and bring everything down if you’re not careful, so do make sure that the supporting structures are strong and can bear the weight of this majestic climber.

Oh, and don’t let your puppy eat any part of this plant. The buds, flowers, and leaves contain glycoside amygdalin, which can transform into cyanide. Though not enough to kill, your pet won’t be having his best day if he munched this plant. 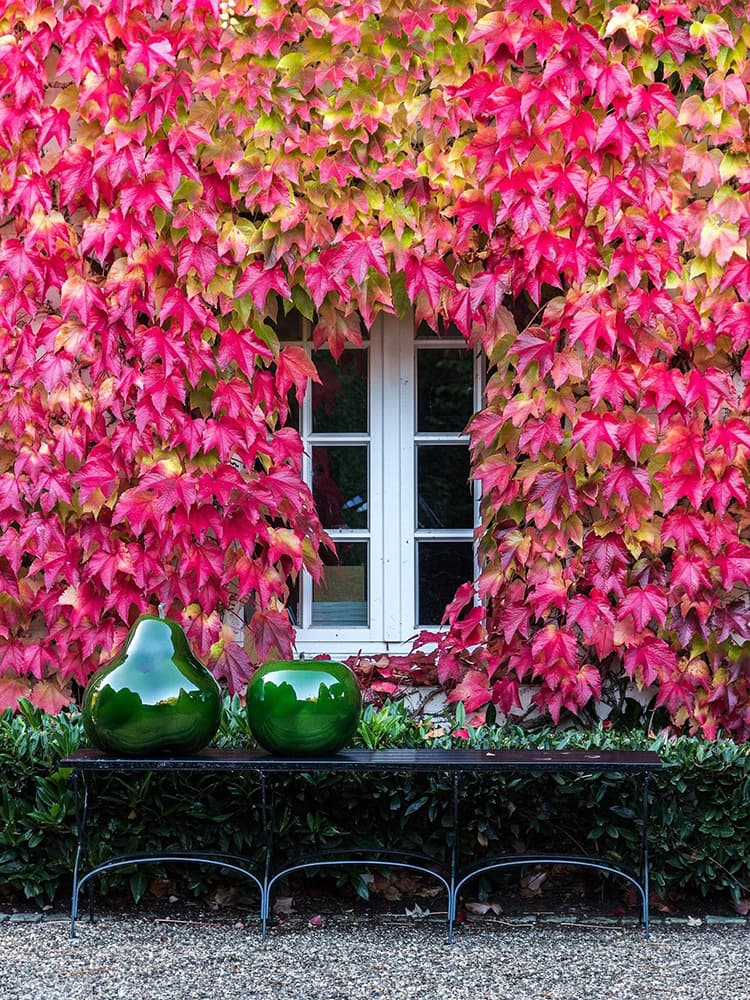 Heard of those Ivy League schools? Well, meet the ivy that Ivy League came from. You’ll see it in abundance across the most upscale and elite campuses of the country. The so-called Boston Ivy (Parthenocissus tricuspidata) is actually native to Korea, Japan and north-eastern China. Sometimes it’s even called Japanese Ivy, although it is unrelated to true ivy.

It’s a woody vine that can reach 90 feet at its best. It secretes calcium carbonate, which works like a kind of perma-glue to help it latch on to walls without need for any other support. 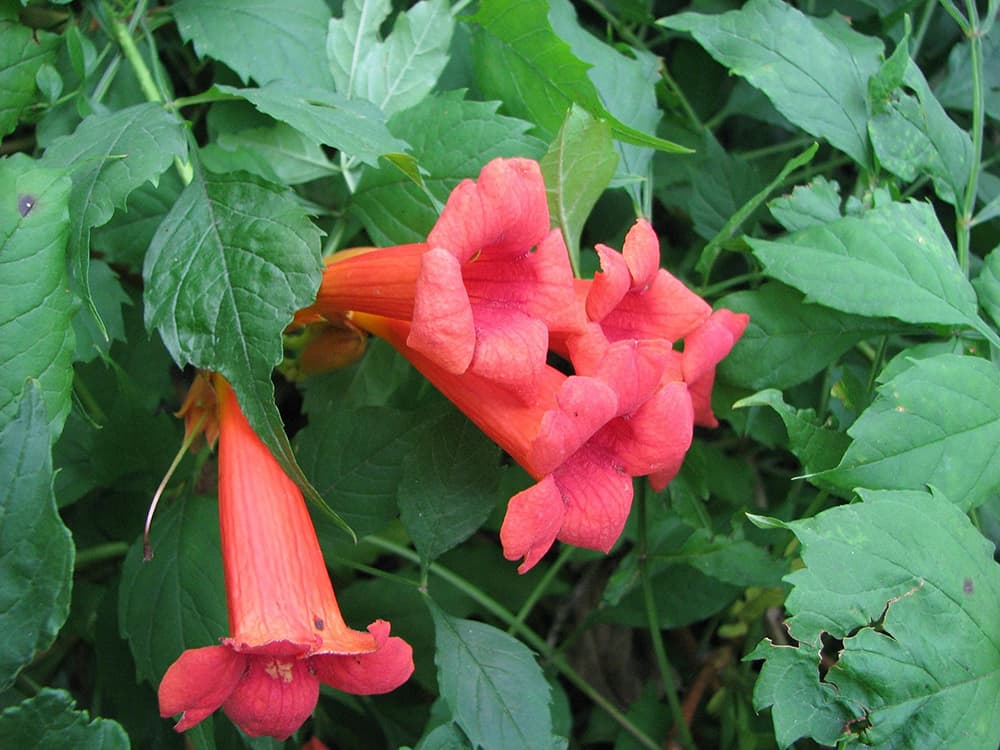 For some reason, it’s called the Cow Itch Vine or Hummingbird Vine in North America. The self-conscious yellow, orange and red bell-like flowers of the Trumpet Vine (Campsis radicans) are a delight to behold. The early settlers to New England who found this plant growing abundantly called it first jasmine, then honeysuckle, and then someone call it a bell flower.


Be careful not plant it too close to the house, because its invasive roots can damage the foundations. It’s a bossy climber so keep an eye on its movements. In just one season, it can overwhelm the wettest, warmest parts of your garden, rising as high as 40 feet and blocking out the view. Oh, and never let it curl around a tree unless you want to how a strong vine can strange a full grown tree. 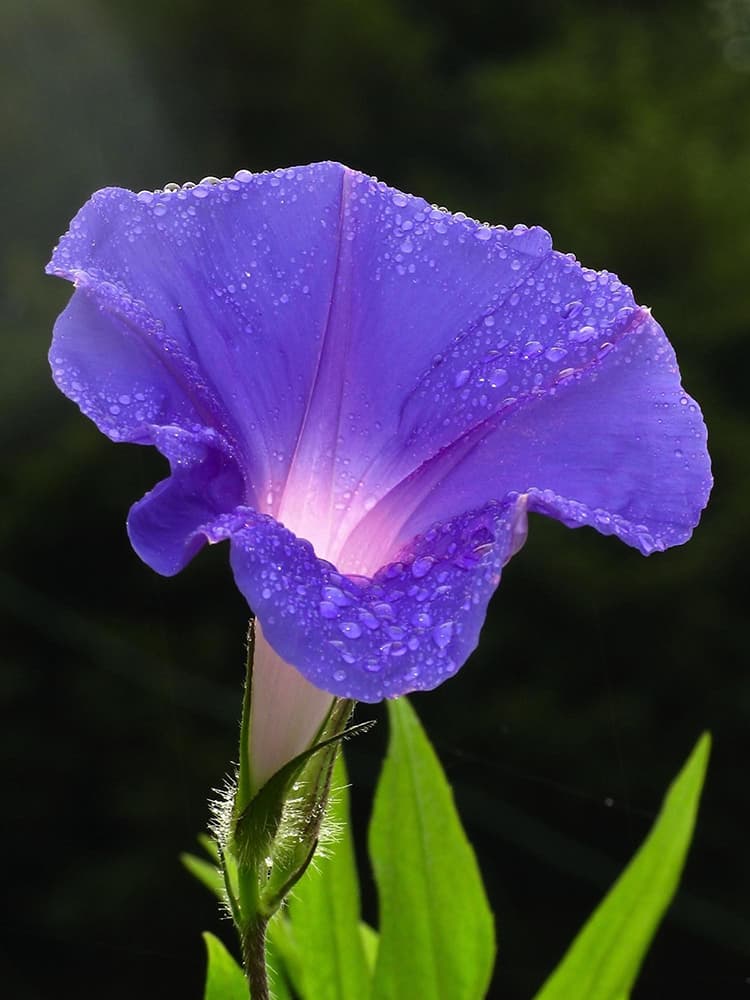 It’s leaves are stir-fried with oyster sauce, fish sauce, garlic and chillies in Thailand to make a delicious quick lunch with rice. The Morning Glory is the colloquial name for over a 1,000 species of the genus Convolvulaceae. As its name suggests, is at its best early in the morning. Within hours, its leaves will start wilting and curling.

The ancient Chinese knew that its seeds were laxative, and the Aztec priests of Mexico used to get high on the hallucinogenic properties of particular species of Morning Glory. It’s a low maintenance plant which likes lots of sunshine all the time, doesn’t mind the heat, and is always ready to host butterflies and hummingbirds. 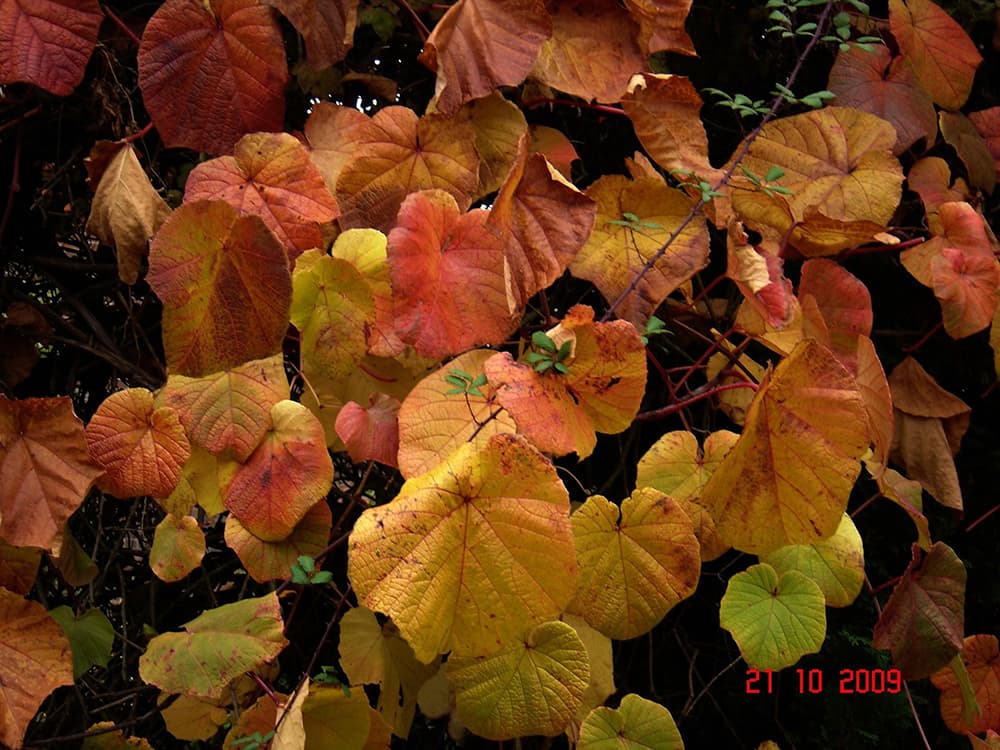 In Korea and Japan, they use the leaves and flowers of the Crimson Glory Vine (Vitis coignetiae) to make a wine. It’s said the wine is bitter at first but sweetened with the gradual addition of sugar.

This large-leafed climber’s generous green leaves start changing as summer yields to autumn. The green gives way to gold and stunning crimson-bronze. So breathtaking is the sight that the plant received the Royal Horticultural Society’s Award of Garden Merit.

Plant it by itself for it’s a strong plant and can easily smother its neighbors in a garden.