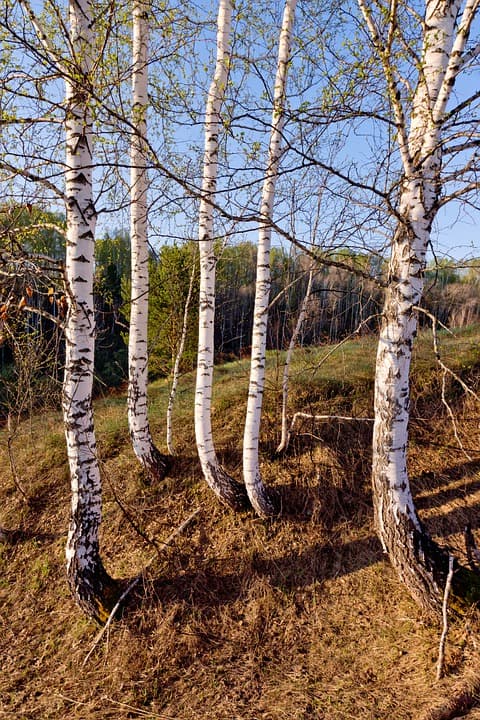 We may receive commissions from certain links you click on our website. As an Amazon Associate I earn from qualifying purchases.

Known for their distinctive papery bark and white coloration, birches are great trees for decorating any landscape. Although this type of tree has its issues as it can be susceptible to some harmful pests and doesn’t live very long, it’s still a favorite of many gardeners and landscapers. Birches can reward you with many excellent qualities if you manage to grow and care for them correctly. There’s more to them than just the distinctive peeling bark. Most species of birches show off graceful shapes with more reduced statures.

Birches are also appreciated for their elegant crowns adorned with catkins and eye-catching leaves. You can count on them to create a superb display in the summer and fall seasons but their beauty can stand out best during the dreary winter months. Most species of birch trees can be grown without too much effort and aren’t affected by deer. Although gardeners usually opt to plant a birch as a specimen tree, groups of birches can also look amazing due to their slender trunk and characteristic bark. If you’re interested in growing a birch tree, you need to be aware of the most common species that bring the best benefits to your yard. 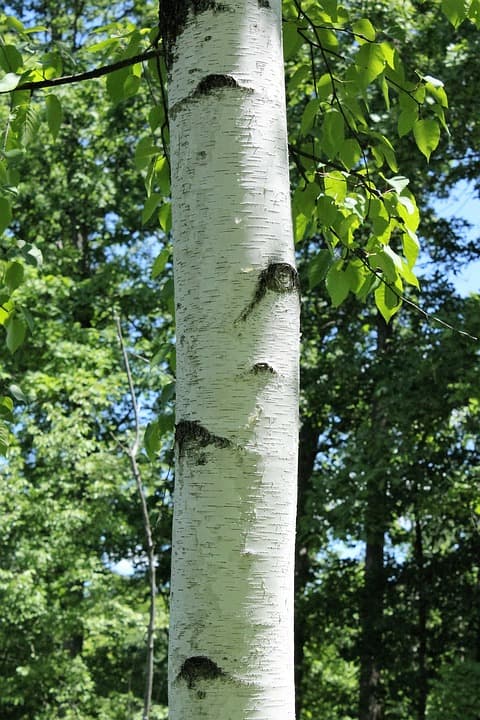 One of the most common species of birch, the Betula papyrifera grows fast and boasts a gleaming white bark. It’s called the paper birch because the first layer of bark peels away to reveal a second one underneath which usually has a darker brown color. This tree is native of northern parts of the US and Canada where it can grow either as a single-trunk tree or in clumps. Thanks to its high-quality wood, this birch has been often used by Native Americans to craft products like canoes and footwear. For this reason, the paper birch is sometimes called the canoe birch. 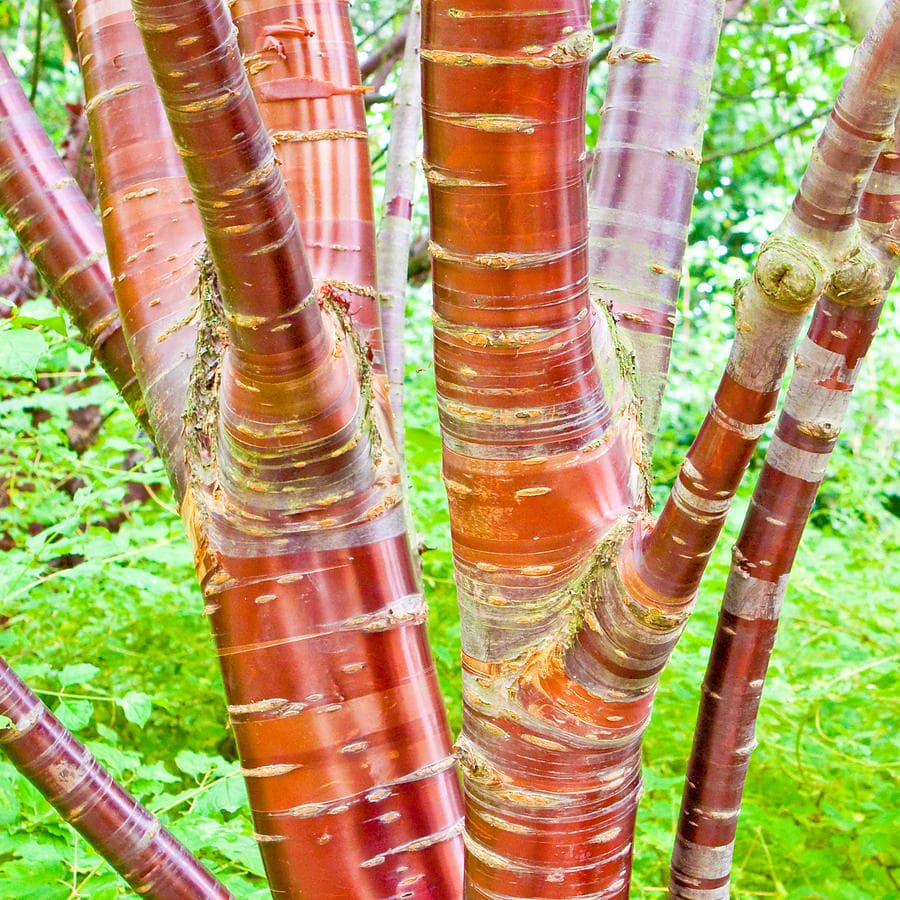 The cherry birch shows off a shiny brown bark and yellow leaves. It gets its name from the bark’s look that’s fairly similar to the one on cherry trees. The developed trees have irregular scaly plates on their trunks that appear from cracks on the bark. The cherry birch has great wildlife value thanks to its catkin fruits that appear from late summer to mid-fall. Many wild animals such as rabbits and deer feed on this birch’s fruits. While other species of birch can be quite susceptible to the bronze birch borer, it seems this one has superior resistance to this pest. 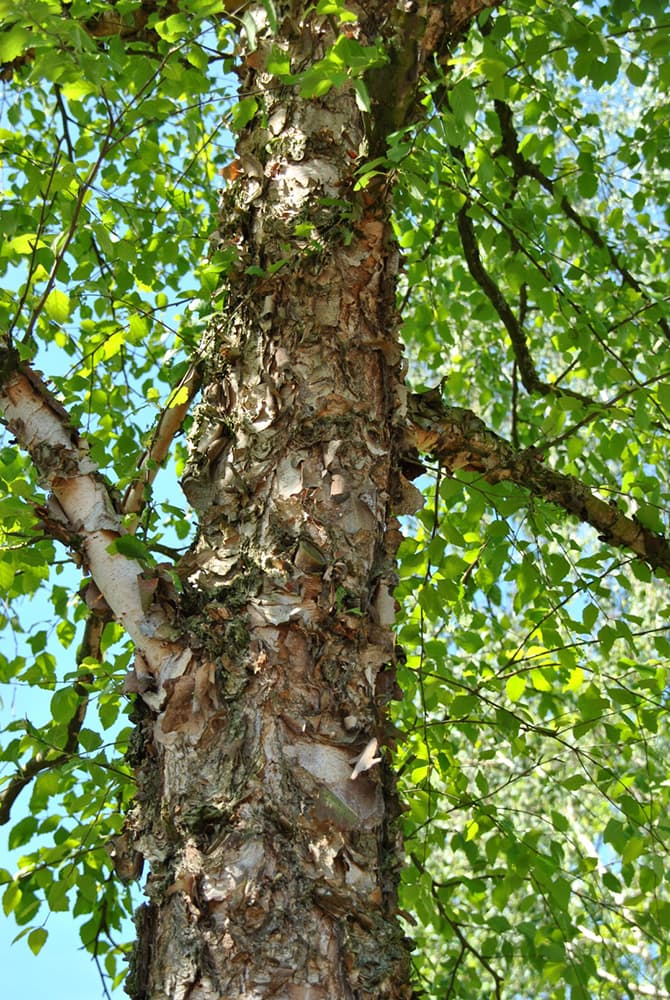 Betula nigra or river birch is a valuable tree for its attractive peeling bark. It can make a statement with its scaly brown bark that crafts layered textures in any garden. This is another type of birch tree that grows quite fast. You can count on it as a specimen tree considering the impressive 35 feet spread of its canopy. The river birch is a bushy deciduous tree that has a pyramidal, upright growing habit. It produces glossy leaves whose undersides come with a silver tinge. As the name of this tree implies, it’s adapted to wet soils. The river birch is also known for its excellent heat tolerance. 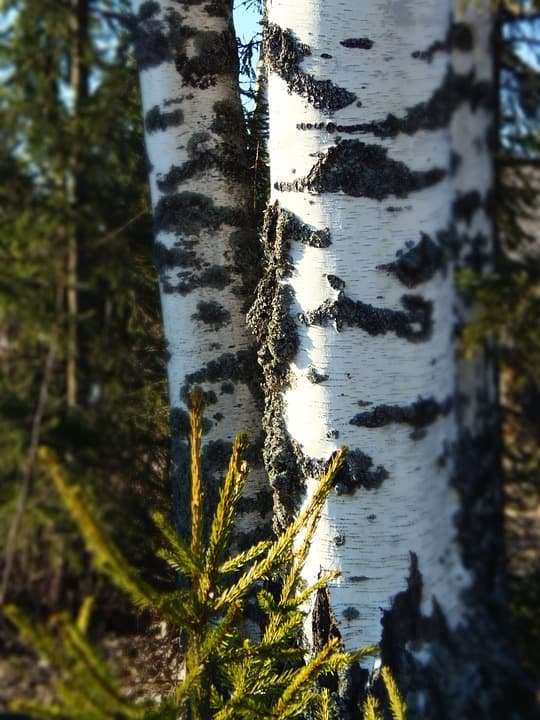 With a pendulous habit and peeling white bark, the silver species creates a classic birch display in any landscape. This is a single-trunk tree that’s also called the European white birch. It has a graceful appearance with a bark that changes its texture and color over time. Black clefts will start to appear as the tree develops while the base becomes rougher. The overall shape of the tree changes as well when the silver birch grows older. Its elegant pyramidal look will turn to a more rounded habit. The silver birch stays attractive in all seasons but it provides solid visual interest for cooler northern climates. 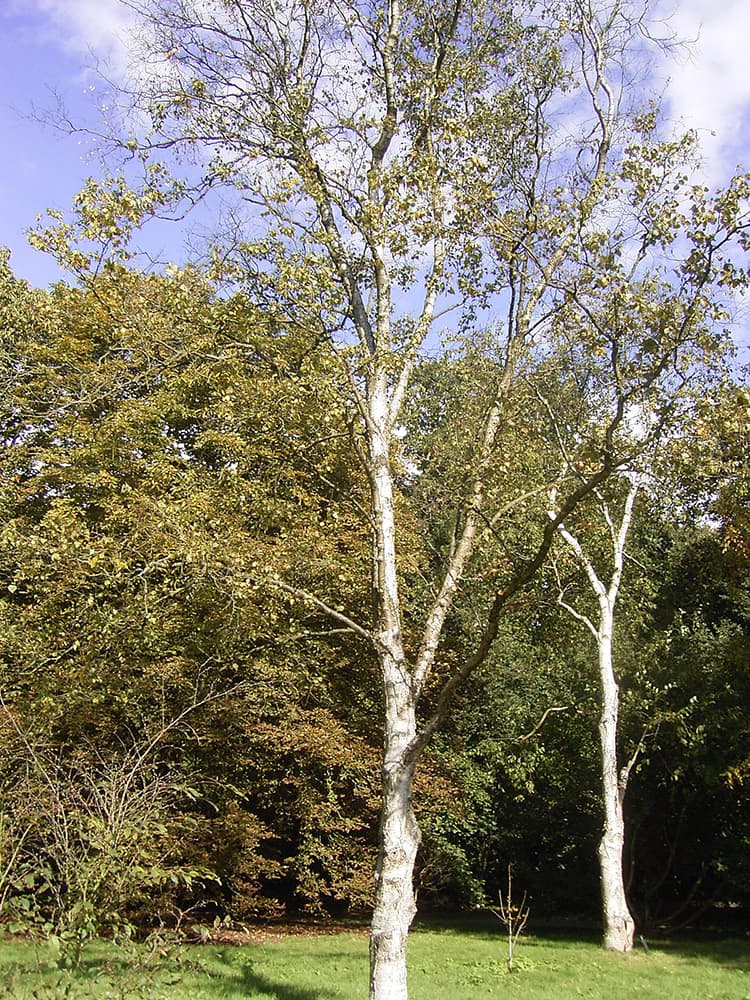 The Japanese white birch is a tree with thin spreading branches that prefers wet soil and full sun exposure. This species of birch has distinctive white bark and can reach pretty tall heights of up to 50 feet. Depending on the climate, the Japanese white birch can flourish in partial shade environments as well. It’s a recommended tree for cooler areas because heat can increase susceptibility to dangerous pests. This birch is a native of Japan and Korea. It shows off golden foliage in the fall which makes it ideal as a specimen plant or to add to a cottage garden. 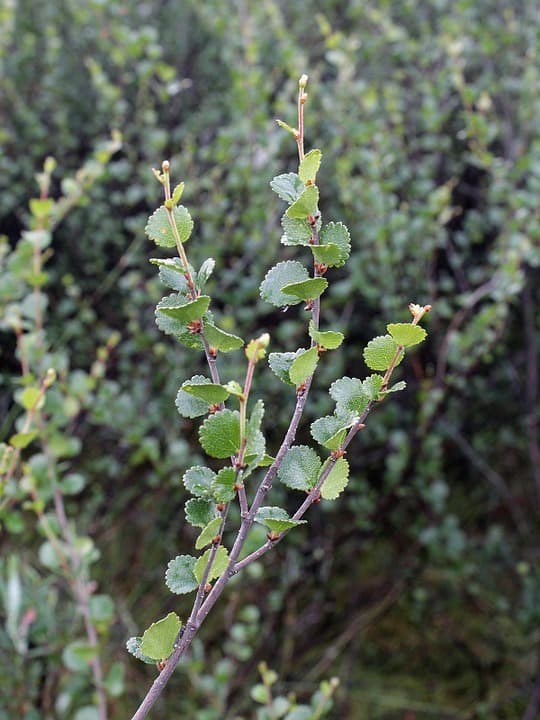 Not all species of birches are tall trees. One solid example is the dwarf birch that can be commonly found in tundra landscapes. This shrub is adapted to poor acidic soils and it’s been known to thrive in rocky environments. The dwarf birch grows in hardiness zones 1 to 8. It prefers cool temperate regions with full sunlight exposure. Although you won’t find this type of birch very often in landscapes, it’s frequently found in northern territories of Europe, Asia, and North America. The dwarf birch can be added to your yard without too many difficulties but it’s important to keep in mind the lack of shade tolerance. 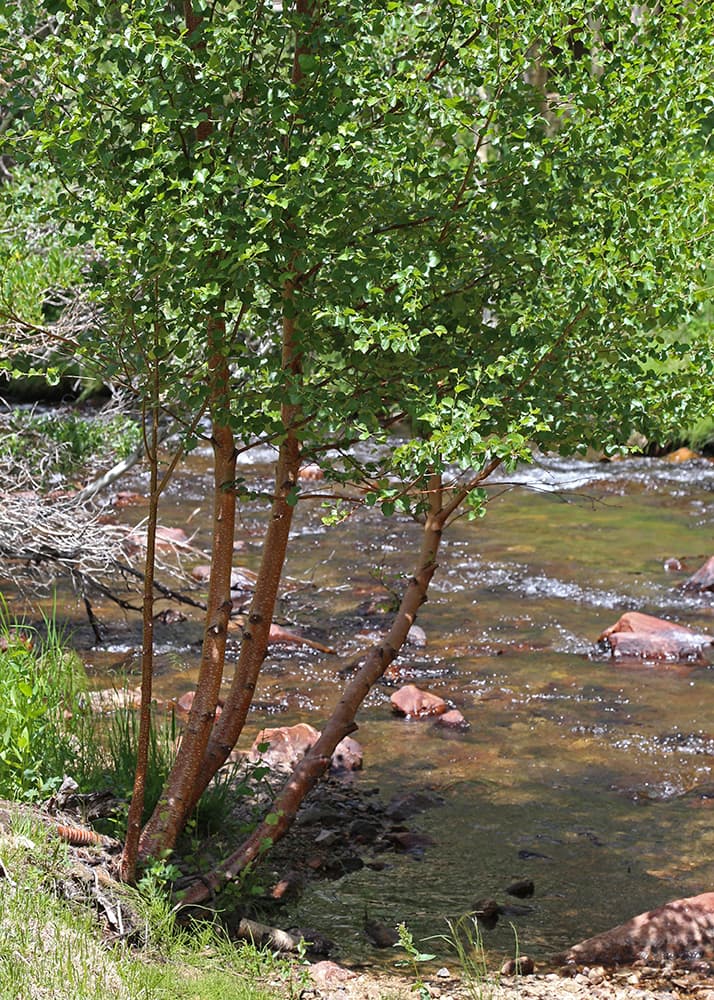 Commonly called red birch due to its distinctive bark color, this species of birch prefers sites close to streams or mountainous areas. The dark red bark of the water birch sets it apart from other species but that’s not the only interesting aspect found. It’s also worth mentioning that this birch doesn’t have a peeling bark which is somewhat unusual for birch trees. The common North American beaver relies on this tree for its lodge material and food. The water birch has a shrubby form that doesn’t grow taller than 25 feet whereas trees of the species can reach 40 feet in height. 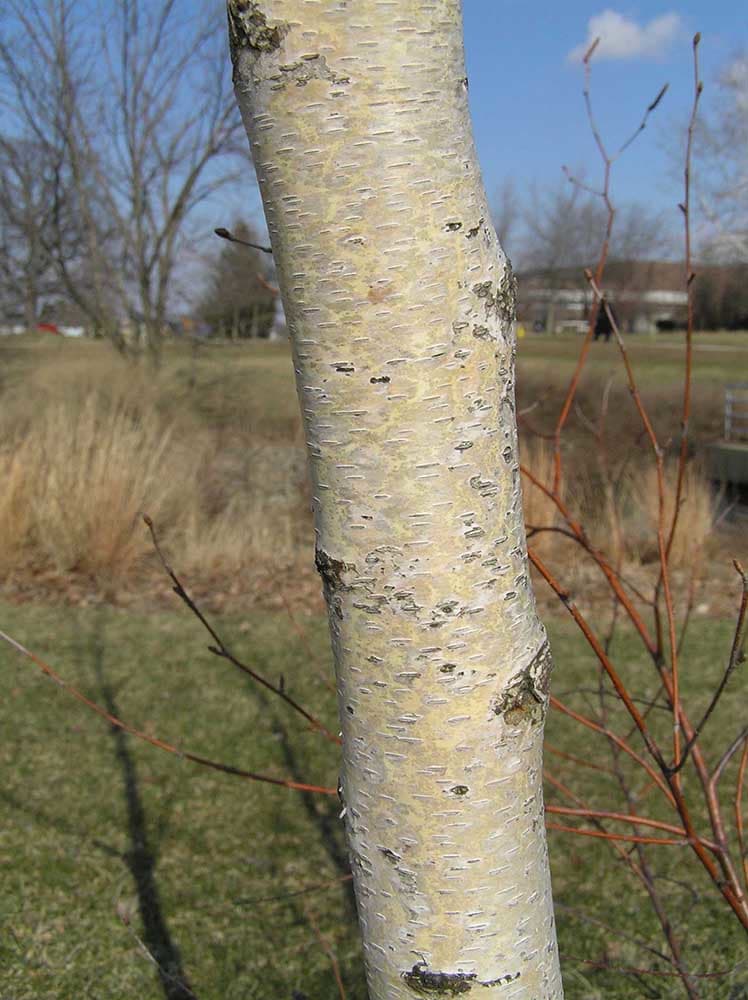 Some species of birch trees will typically show off multiple trunks. One notable example is the gray birch whose silhouette can remind you of an oversized shrub. Trees of this type tend to develop in a cluster by relying on the same root group. Gray birches have white bark with airy leaves. They enjoy moist soils and can be grown successfully as long as you live in USDA zones 3 through 8. Considering its natural beauty, this birch can be commonly used for adorning winter landscapes. It doesn’t grow particularly tall and its reduced stature can be seen as an advantage when dealing with smaller yards. 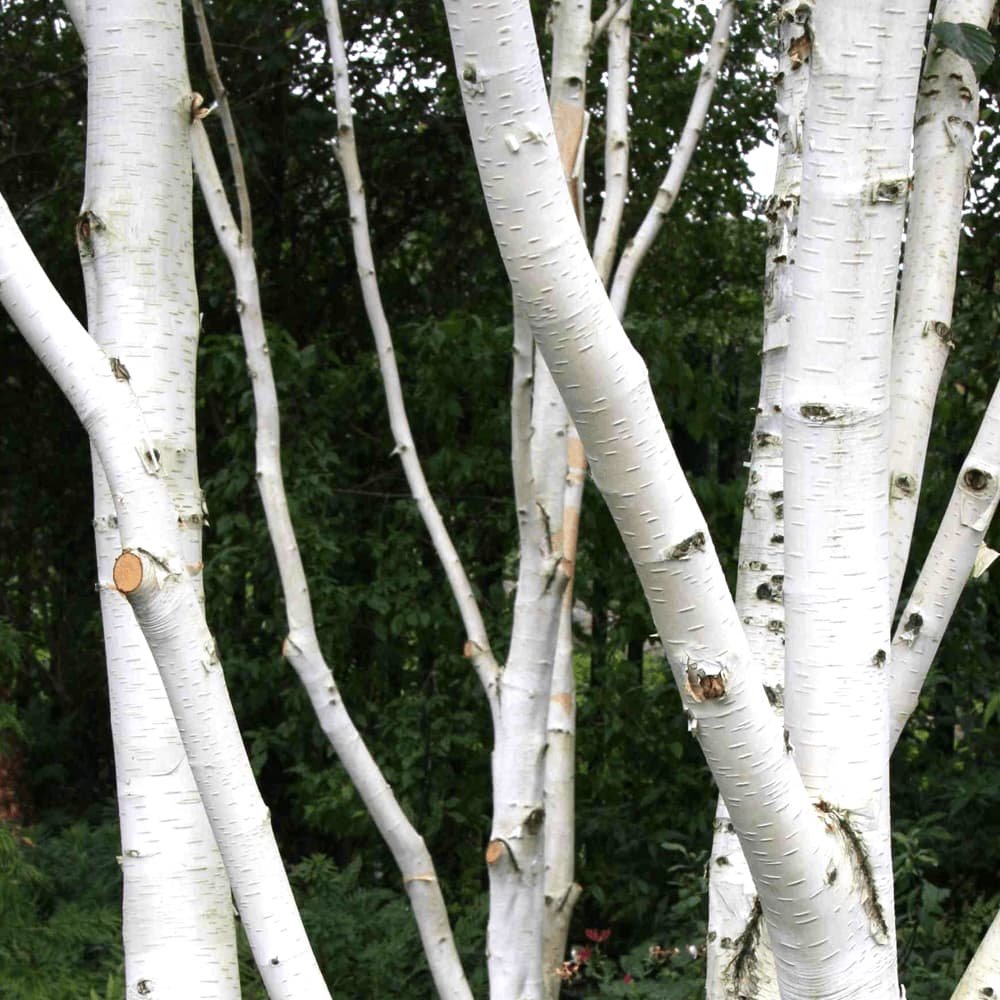 Although many species of birch have white bark, it’s safe to say that the Himalayan birch offers the brightest shade of them all. The bark of this tree seems to shine with a vibrant look that creates a contrasting effect with the surrounding landscape. The exceptionally white bark of this birch isn’t its only appealing quality. There’s more ornamental interest provided through the tree’s delicate spring flowers and warm yellow fall color. The Himalayan birch can grow up to 50 feet and its single trunk tends to have a pyramidal branching habit. Unfortunately, this species is often affected by the bronze birch borer.

The Erman’s birch species has a peeling bark in creamy color tones. Its branches develop into a shade of copper-brown while growing into a conical shape. This type of birch has a fairly stately look, especially when you take into account its heart-shaped green leaves. It becomes more impressive in the fall when the large leaves turn to a golden-yellow color. This tree can grow quite tall as some specimens can reach up to 70 feet. Similar to other types of birches, Erman’s birch thrives in well-drained soils that provide a consistent level of moisture. City gardens and foundation plantings can definitely make use of the landscaping potential of this birch species. 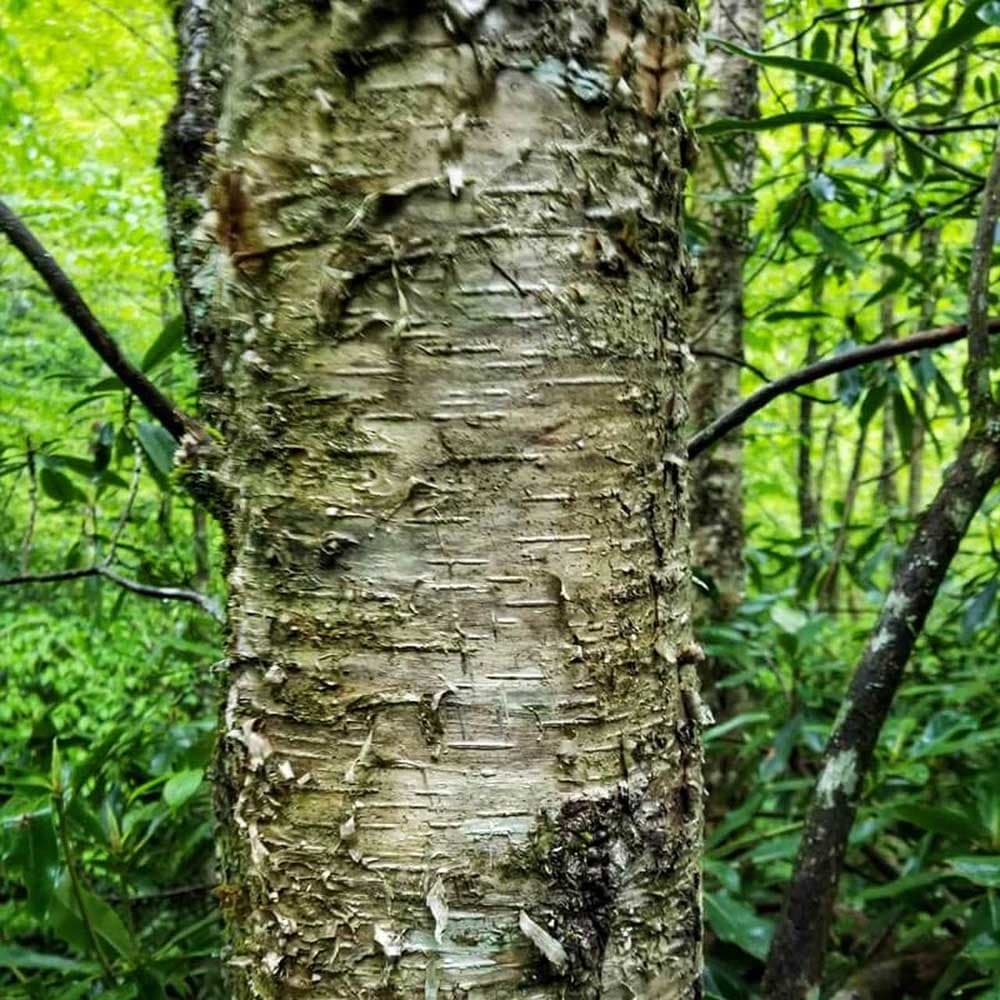 Also called the swamp birch in some regions, this birch species is noted for its yellow-bronze bark. The yellow birch grows as a single trunk tree with many natural specimens enjoying long lifespans of up to 300 years. The unique style of this birch makes it an attractive choice for many landscape settings. This species of birch shows off peeling bark in horizontal strips. The wood of yellow birch is highly appreciated by the lumber industry while it boasts great wildlife value as well. These trees are known for growing quite tall averaging a height between 50 and 80 feet. 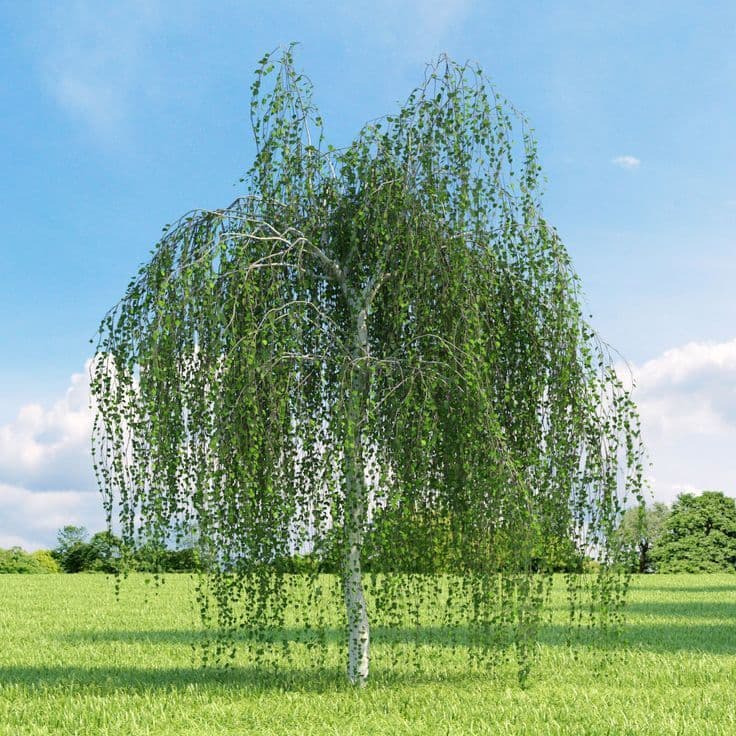 This is a variety of silver birch that displays a characteristic appearance with gracefully weeping branches. Weeping birches are recommended for creating focal points in any landscapes. Although many common weeping birches are cultivated varieties, there are some specimens that also occur naturally. This tree has a white bark that is beautifully accentuated by the draping branches. Fertile and well-drained soils help it flourish. Some types of weeping birch prefer full sun exposure while others perform better in partially shaded environments.