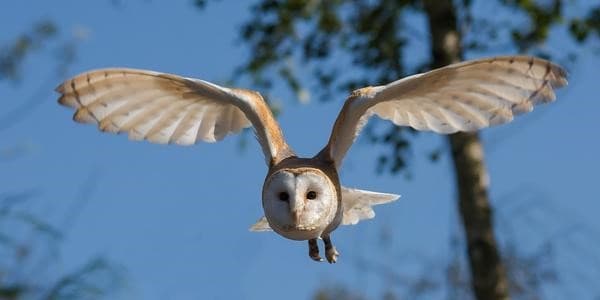 Birdwatching is as relaxing as it is beautiful. There are numerous birds worth your attention in Ontario and there is a vast selection of breath-taking tiny forest species, such as chickadees and kinglets. If you want to have a birding trip, make sure you take with you all the necessary gear. Here is a quick list to make sure you don’t miss any beautiful birds:

A field guide is an important item to take with you on all of your birding trips. It helps you recognize birds and also teaches you interesting facts about them. The Lorimer Field Guide to 225 Ontario Birds is impressively comprehensive, while The Best Places to Bird in Ontario introduces you to the richest natural landscapes in Ontario where you can experience the wonders of birdwatching.

When traveling to remote areas to search for the most beautiful birds in Ontario, a handheld GPS can offer considerable peace of mind knowing that you can find your way back. Garmin eTrex is a simple device at an affordable price that fulfills all your basic needs – has a preloaded worldwide map, reliable signal, and is waterproof. It also helps you estimate time and distance on the map considering high and low altitudes.

Birdwatching is not complete without a crisp picture of the beautiful avian life. This Gosky Titan model is ideal for outdoor activities and can be attached to your mobile phone for extra convenience. It is weather-proof and delivers bright, clear, and crisp images. 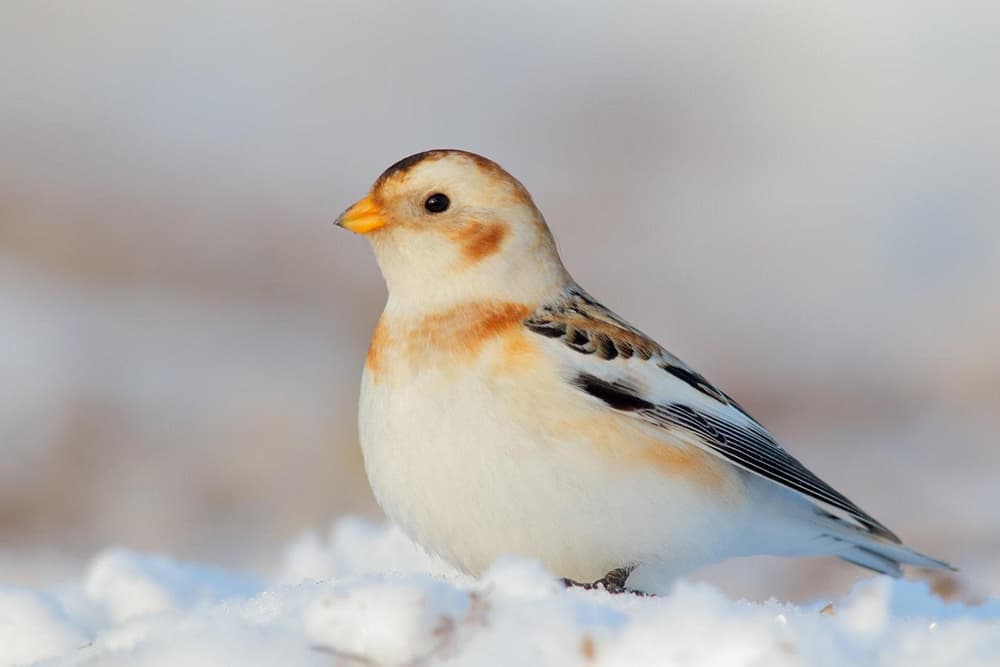 Cold and white winter days are the perfect camouflage for the restless snow bunting. They are common across Canada and the United States and their nests are usually located on the cold rocks on the ground. Their feathers have a rust-like nuance that helps them blend in with the ground. 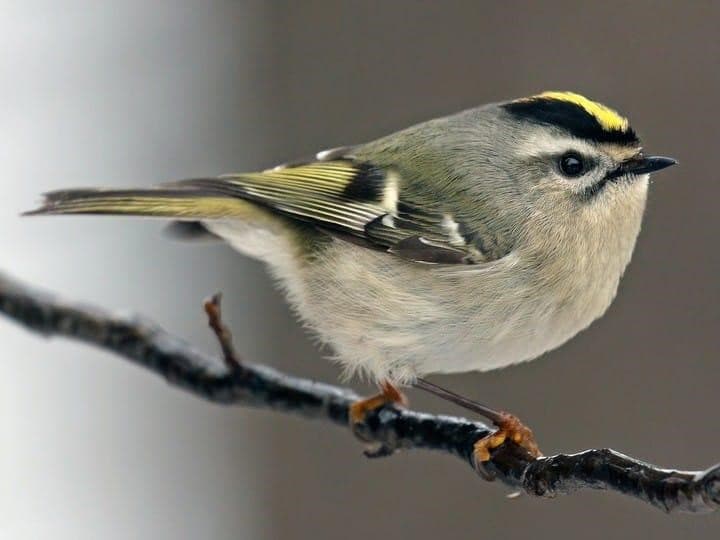 The Kinglet is as tiny as it is energetic and you can see it flying around smaller trees and shrubs. You can easily identify them due to the habit of frantically flicking its wings. The female lays a clutch of eggs that can weigh as much as the tiny bird itself. 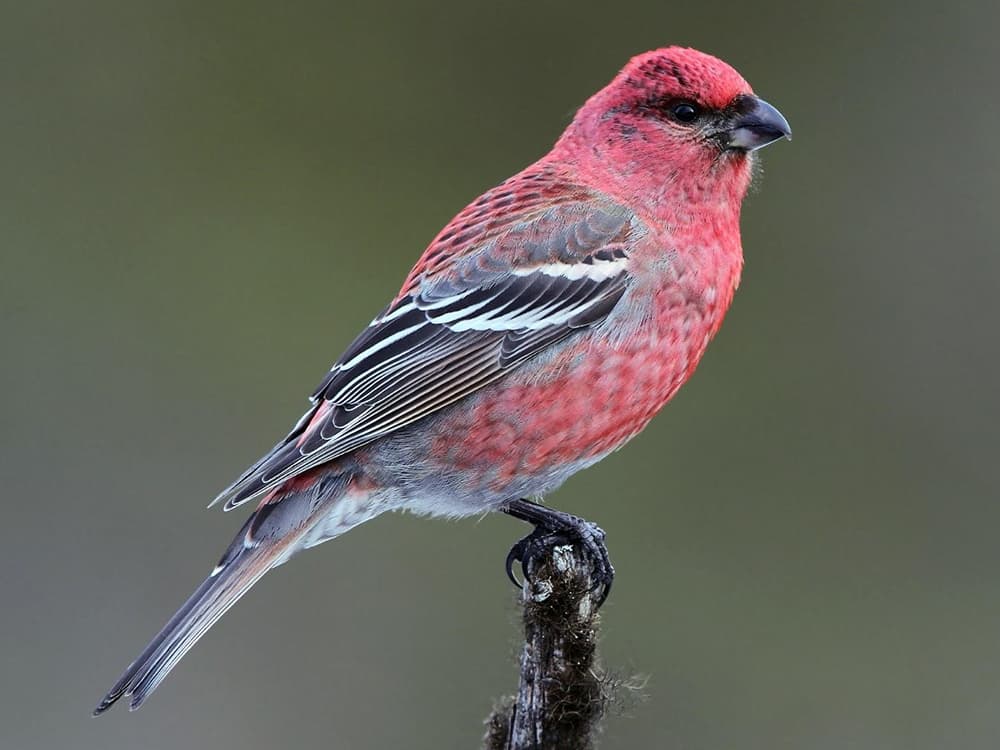 The plump Pine Grosbeak has a beautiful coloring resembling a pink-red nuance with gray wings and a long tail. The colored feathers on both males and females can differ significantly; you can find them in Oxtongue Lake in spring, or the forests in Northern Ontario during the winter where they can find plenty of seeds. 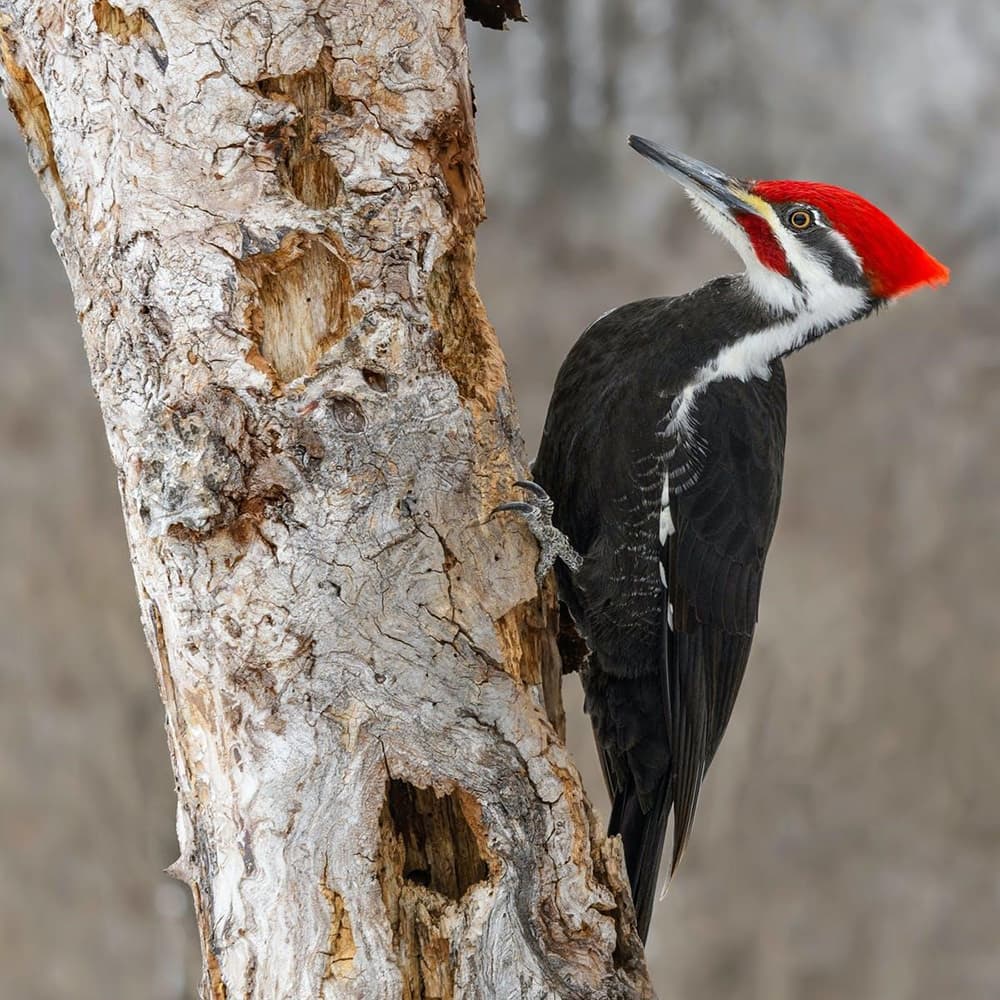 The term woodpecker refers to different family members, including red-bellied, sapsucker, flicker, and black-backed ones. These birds live all around the world, apart from a few regions and the poles. Most people know woodpeckers due to their specific habits, but not many know that they communicate with each other when they peck the wood while cleaning the pests on the trees. 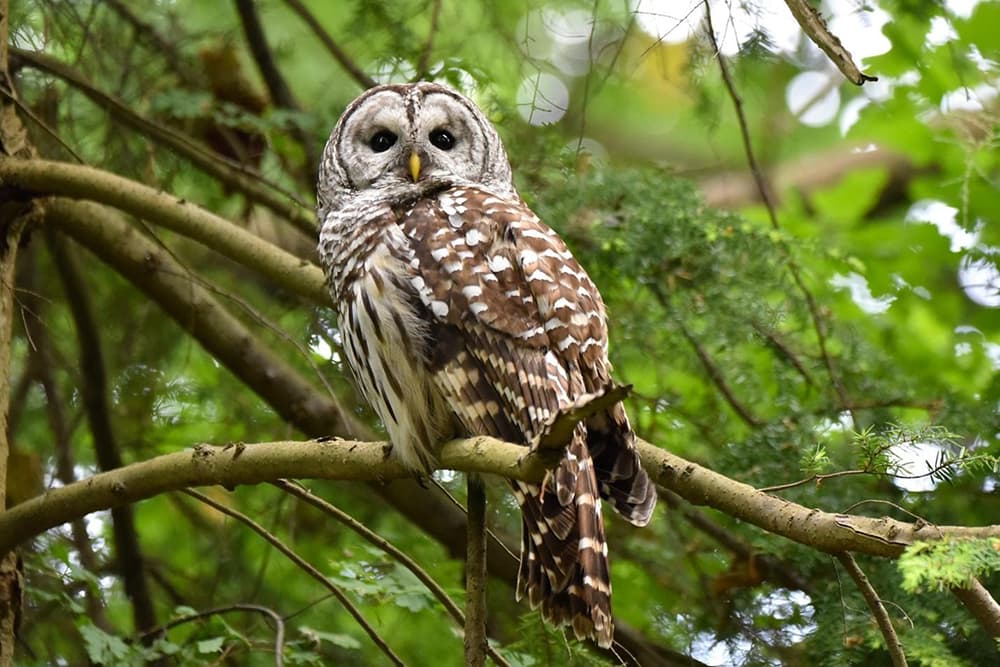 This beautiful owl can be easily recognized due to its stripped, large body. It is a North American species and they are often brown or gray with a few stripes. They thrive in mature forests, but you can also find them in open woodland. 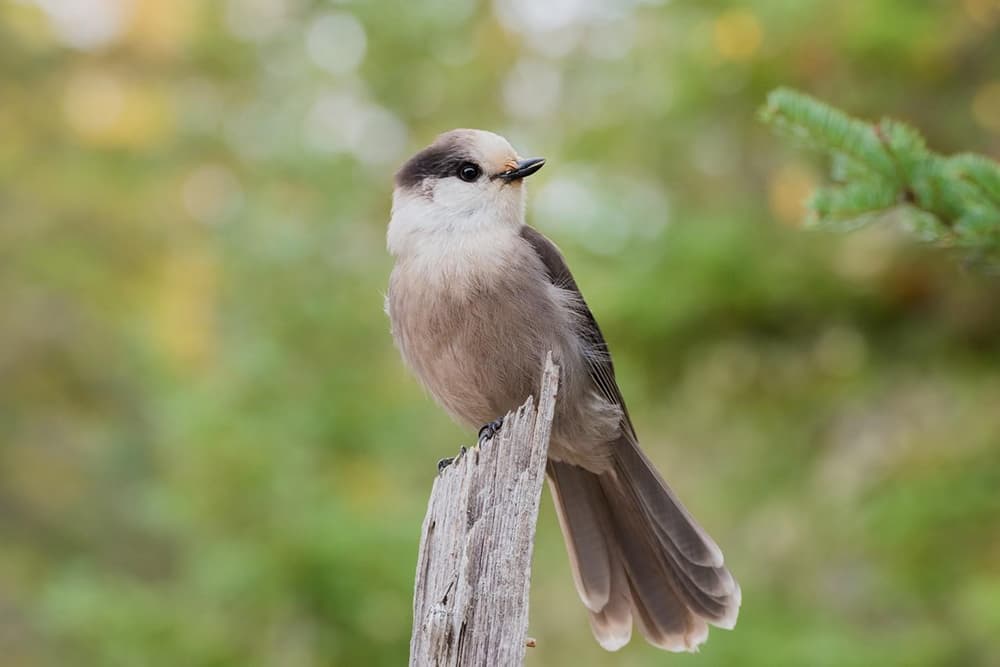 Many people hope that the tiny Canada jay will become the official bird of Canada in the near future. This bird is also known as the camp robber because of its habit of stealing food. It is an intelligent bird and it can be found in numerous national parks across Canada. 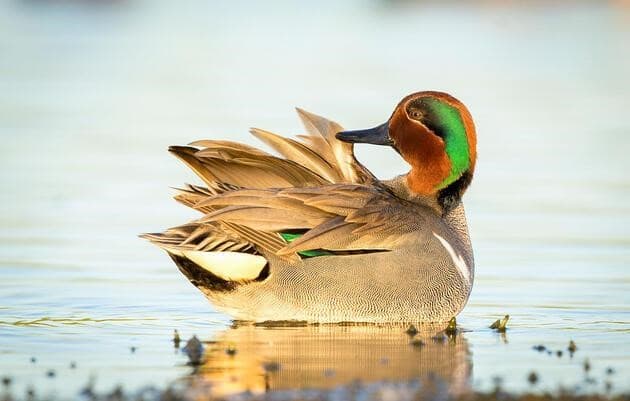 There’s nothing more adorable than a small duck with a short and bulky body. Having a short neck and large head, the green-winged teal is unmistakable. Male ducks are often gray with a bright green stripe from their eye down on the neck. These tiny ducks can be easily recognized due to the green patches on their bodies. 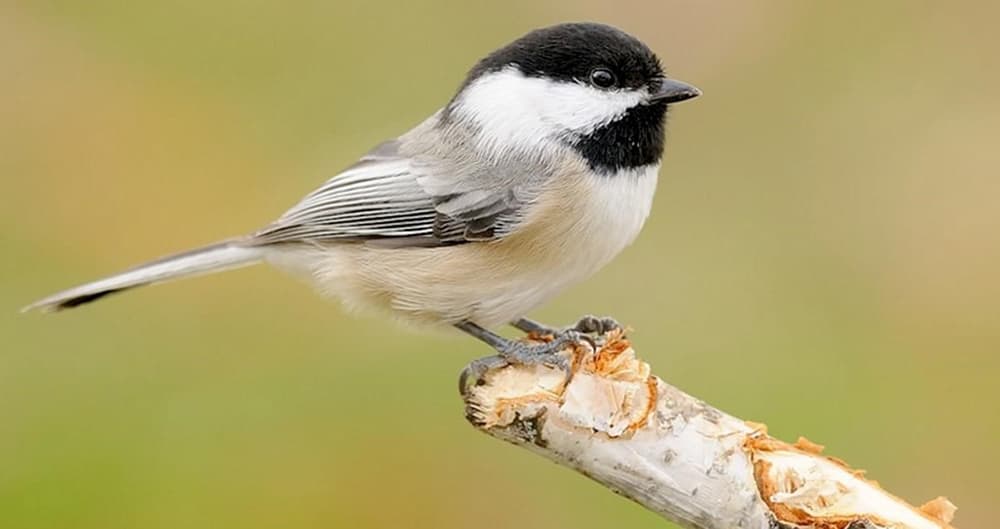 One of the cutest birds in Ontario is surely the black-capped chickadee. It has a small, round head, long tail, and very tiny body. It is an intelligent and inquisitive bird with a black cap and usually enjoys checking everything out in its territory. They are not afraid of people, they love feeders, and birch, willow, or alder trees are their favorite nesting places. 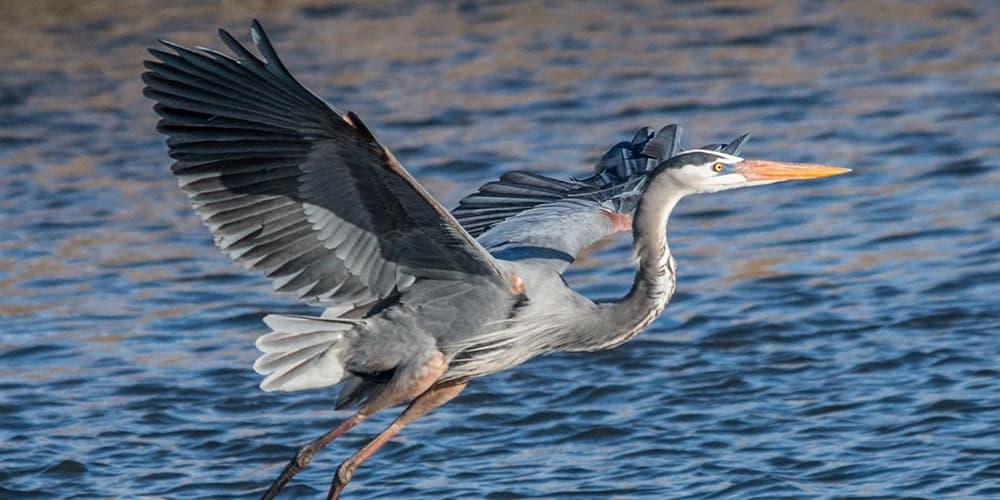 If you are about to go on your first birdwatching trip, this species may be the easiest one you can spot. The great blue heron is common around any water in Canada, it has very long legs and neck, while the beak is extremely sharp. The bird can stay still for a long time waiting for its prey. 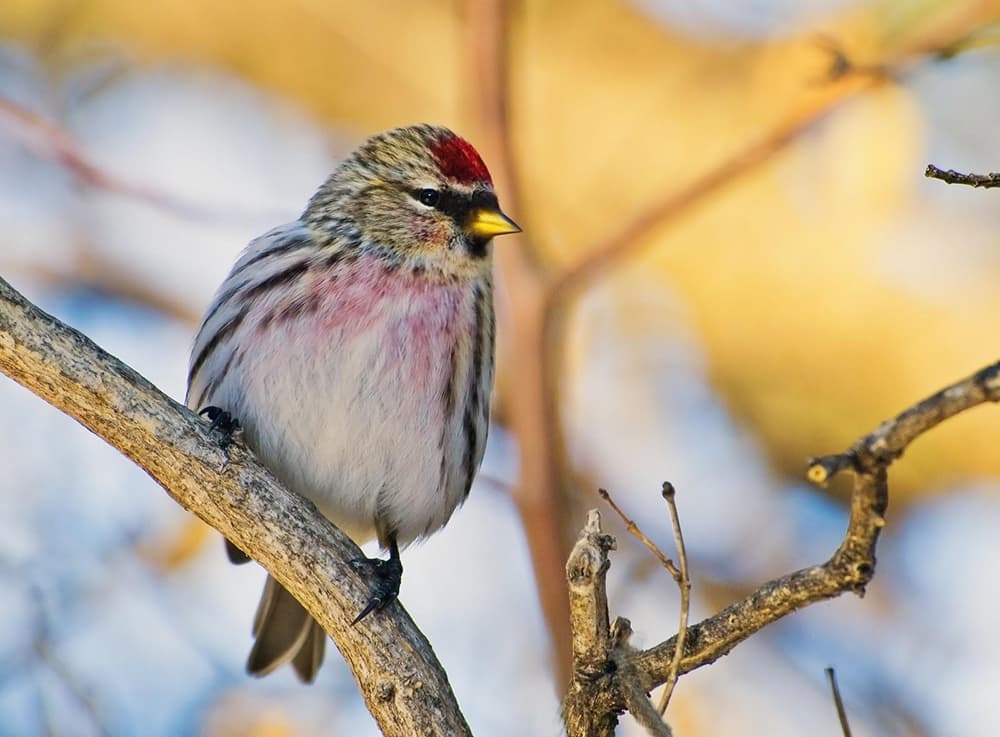 A tiny songbird, the common redpoll has a small body with a pointed bill. The tail is also short and they are often brown and white with a few pink spots on their chest, mostly males. The repolls can be found in large flocks of up to a few hundreds of birds at a time as they frantically look for seeds. 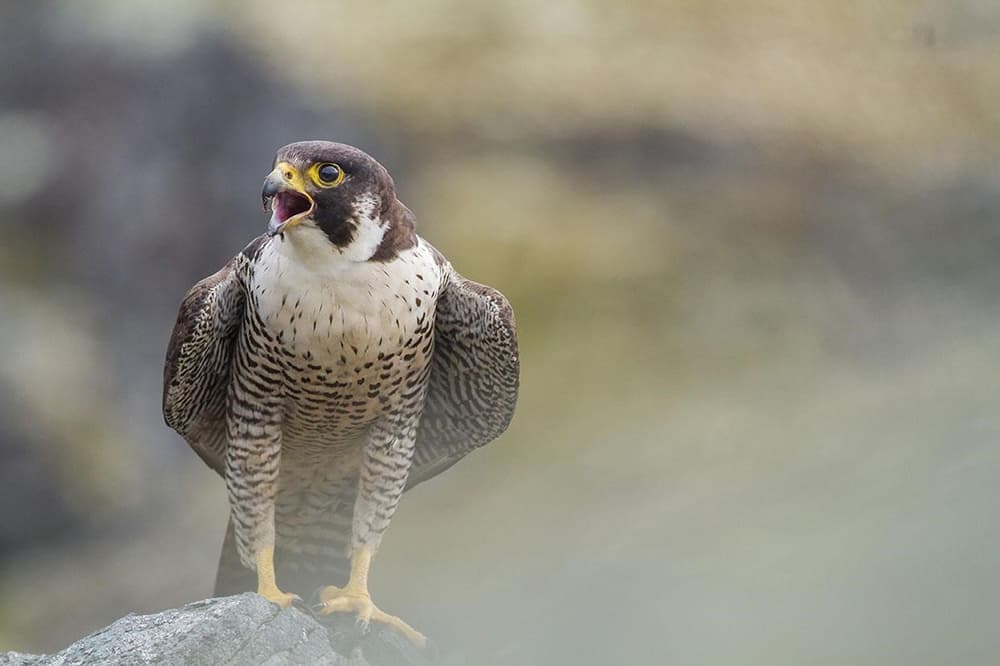 The peregrine falcon is an impressive example of the Canadian avian life. They can now be found around skyscrapers in cities as they resemble the cliffs found in their natural habitat. Unfortunately, the population of peregrine falcons was nearly annihilated due to the use of toxic pesticides that are now banned. 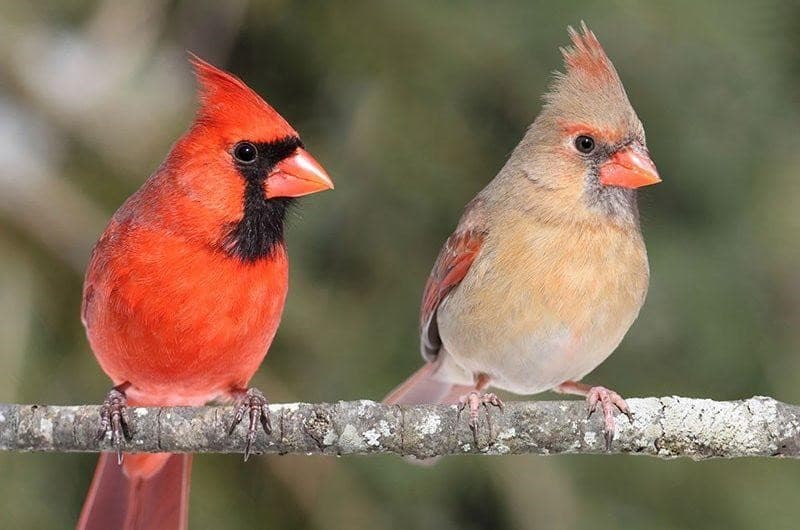 The pretty northern cardinal has one of the most stylish plumage you will see in the wildlife. The bright red colors are simply unmistakable and they do not migrate either, so they can be easily identified during winter, too. They also have a sweet whistle early in the summer mornings. 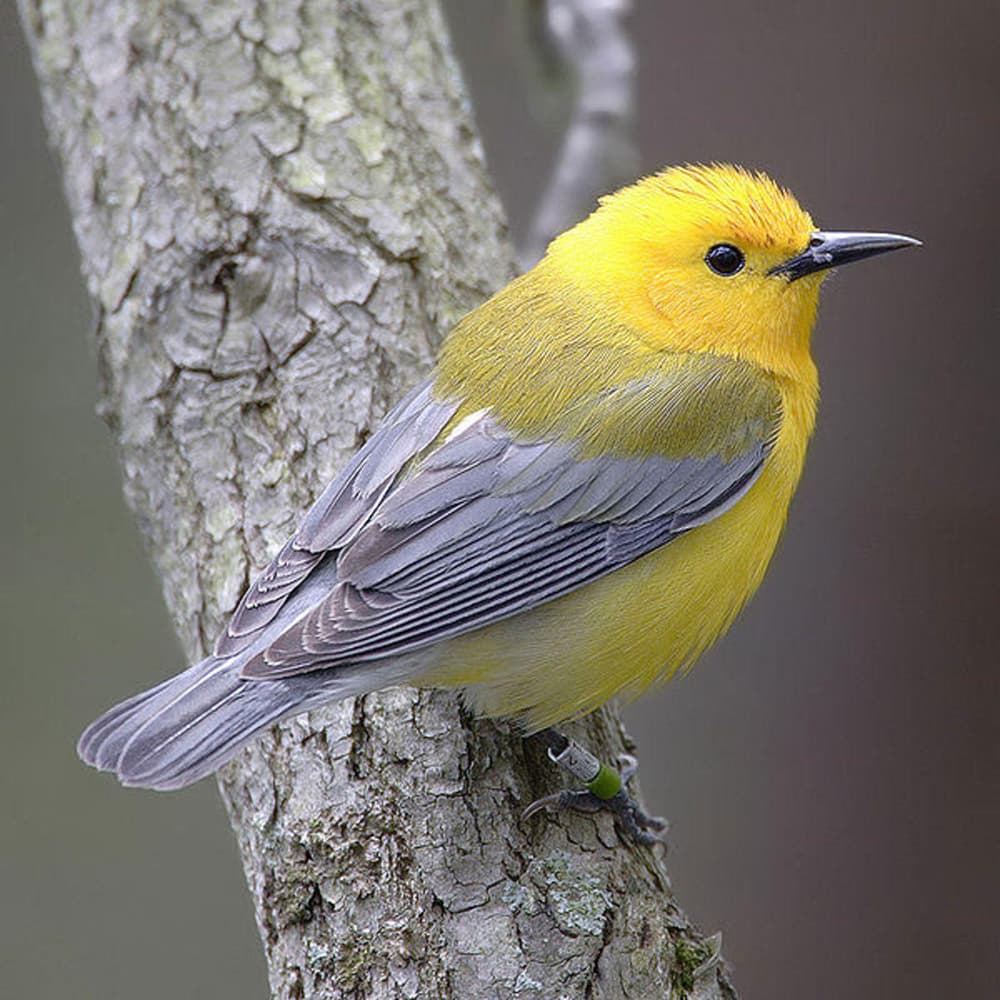 Another bright-colored bird, the New World warbler is a tiny colorful bird that originated in Central America. You can find the beautiful warbler in the Southern Shield. The bird is also referred to as the Canada warbler and might have darker wings and tail, but has the same bright yellow bib, chest, and even head. 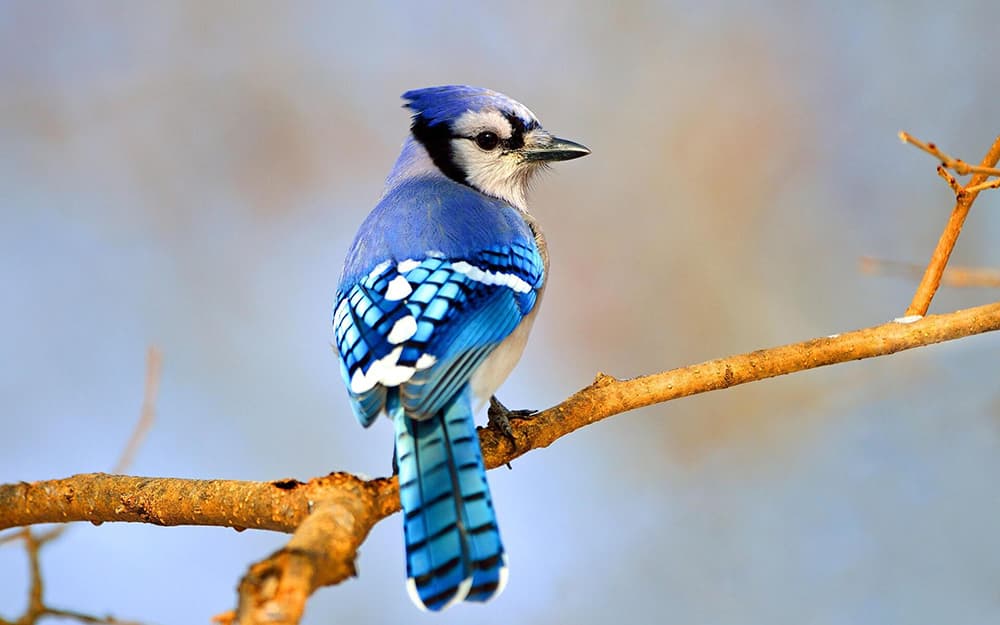 The spruce-fir forests in Ontario are the favorite home of the beautiful blue jay. Although it seems to be vivid blue, this is usually only a trick of the lighting that appears in most photographs. This little bird has a bad reputation for stealing eggs from other birds’ nests but, in fact, it mostly eats vegetable matter. 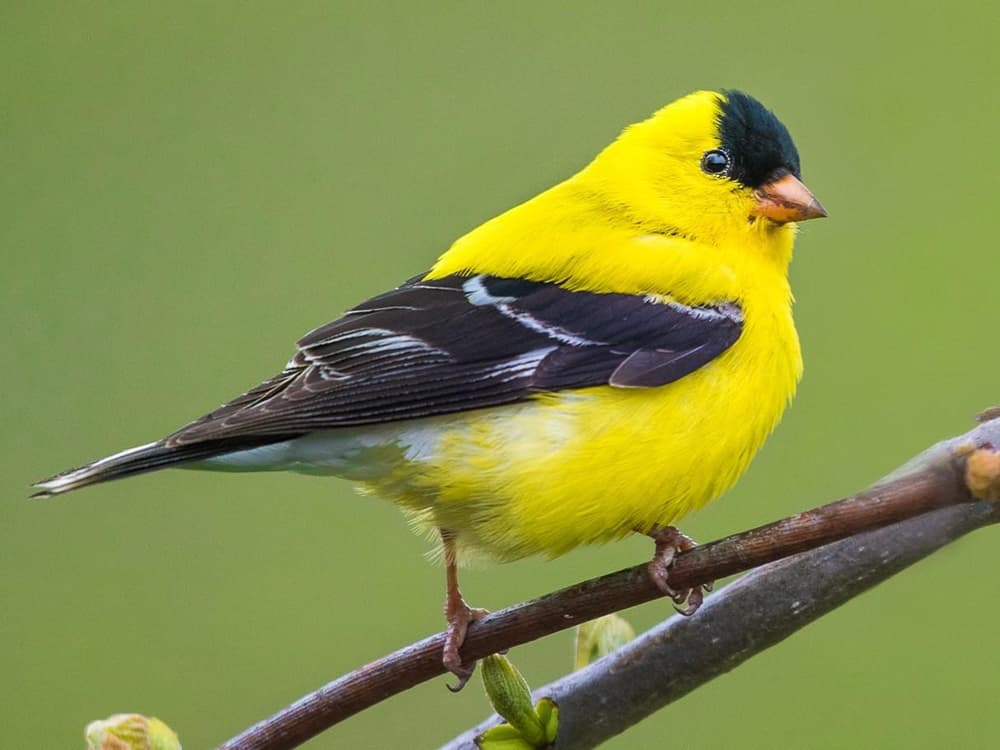 The American goldfinch comes from North America, but its winter range includes Ontario. Adult males are bright yellow with only a few black areas on its head, wings, and tail. They often travel along with common redpolls and they are extremely active and acrobatic.

The light brown wren in Ontario is not related to the New Zealand or Australian wren. They are tiny birds so that they are the shortest birds in England right now. Despite their size, their songs are impressively complex and loud. Wrens have very short, almost round bodies, with small wings and upright tails. 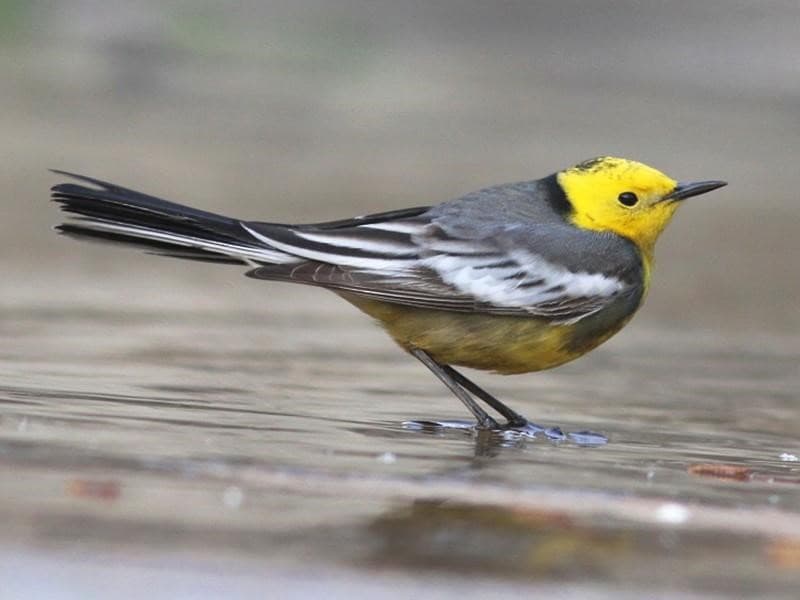 The citrine wagtail is up to 7 cm long and it is quite a rare bird in Canada. Their head and bib are bright yellow, while the chest is typically covered in a duller nuance. You can easily identify them due to the continuous wagging of their tail. 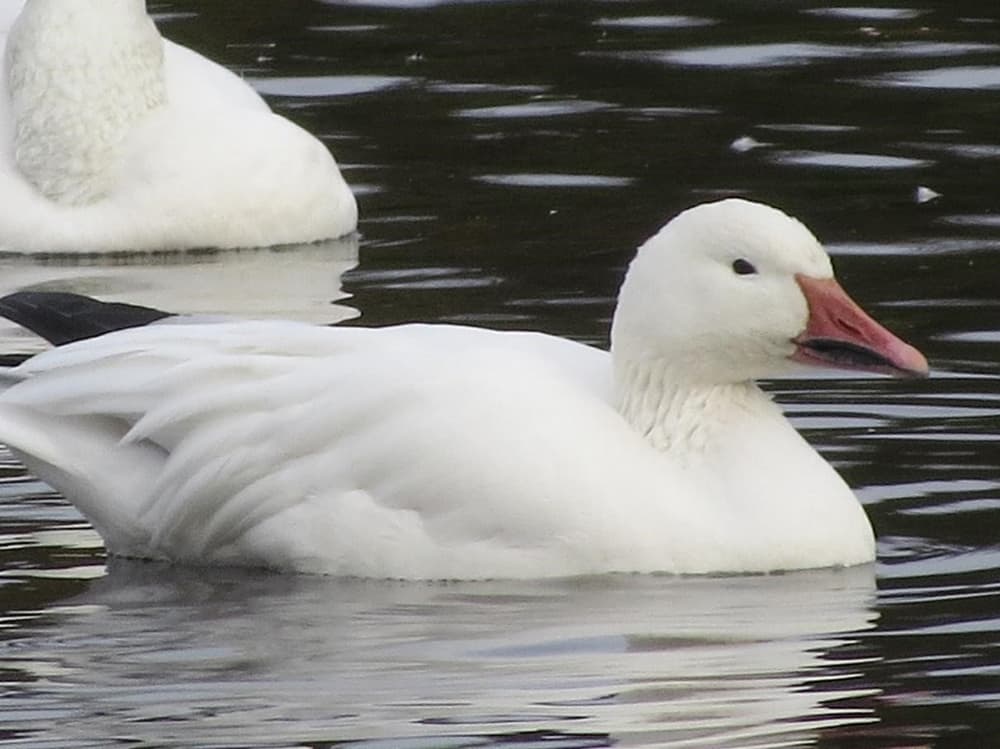 The beautiful snow goose is a fully white bird typically found in North America but is also a less common bird in Canada. The flawless white plumage makes them easy to recognize. Their survival is still threatened due to massive hunting in the early 20th century. 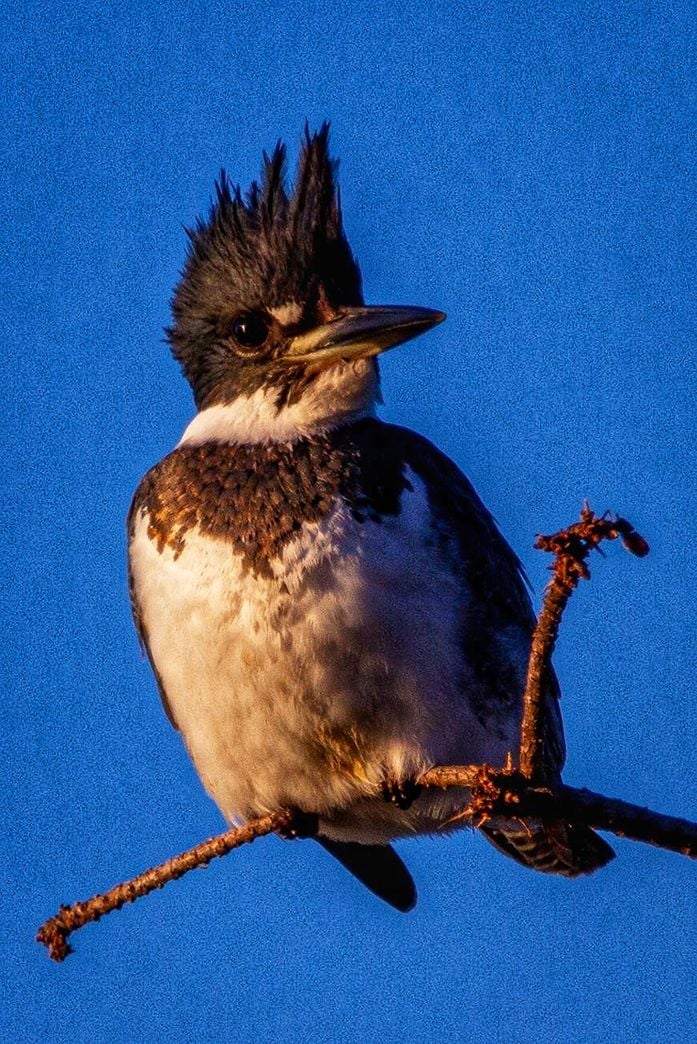 Quite a peculiar bird, the belted kingfisher is a bird with a small body, large head, and a distinguishable crest on top of its head. The bill is long, pointy, and thick. The kingfisher can be identified due to its blue-gray plumage and white spots on its chest and the square-tipped tail. These birds can be found around any body of water because they love aquatic food. 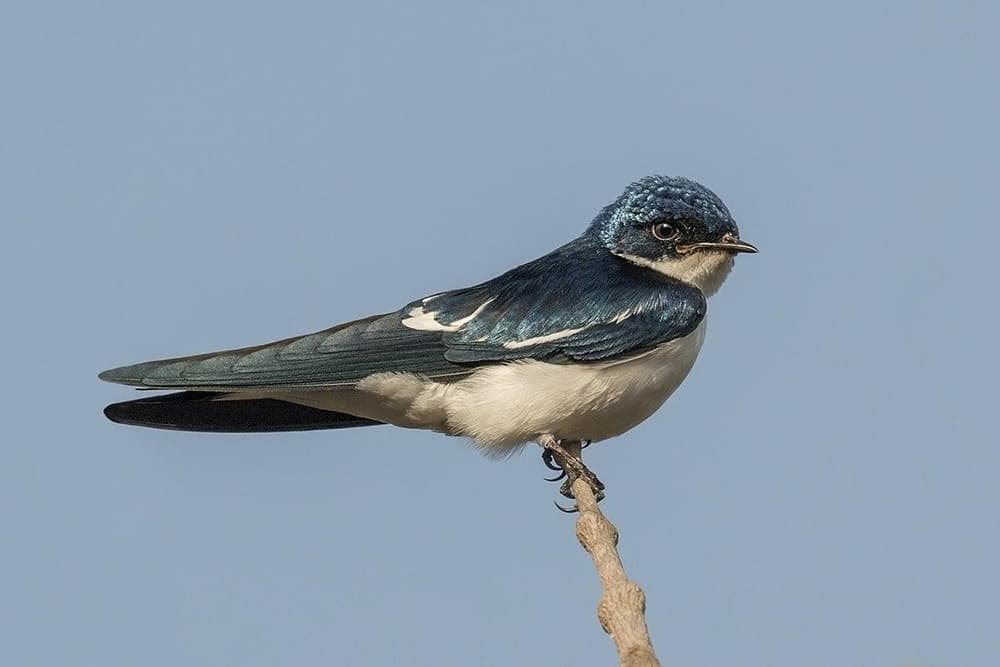 The Hirundinidae bird is also known as martin, swallow, or saw-wing and is commonly found on all continents. They have saw-like wings, similar to their name, which helps them feed during their strong flight. They are small birds with weak feet and long wings. 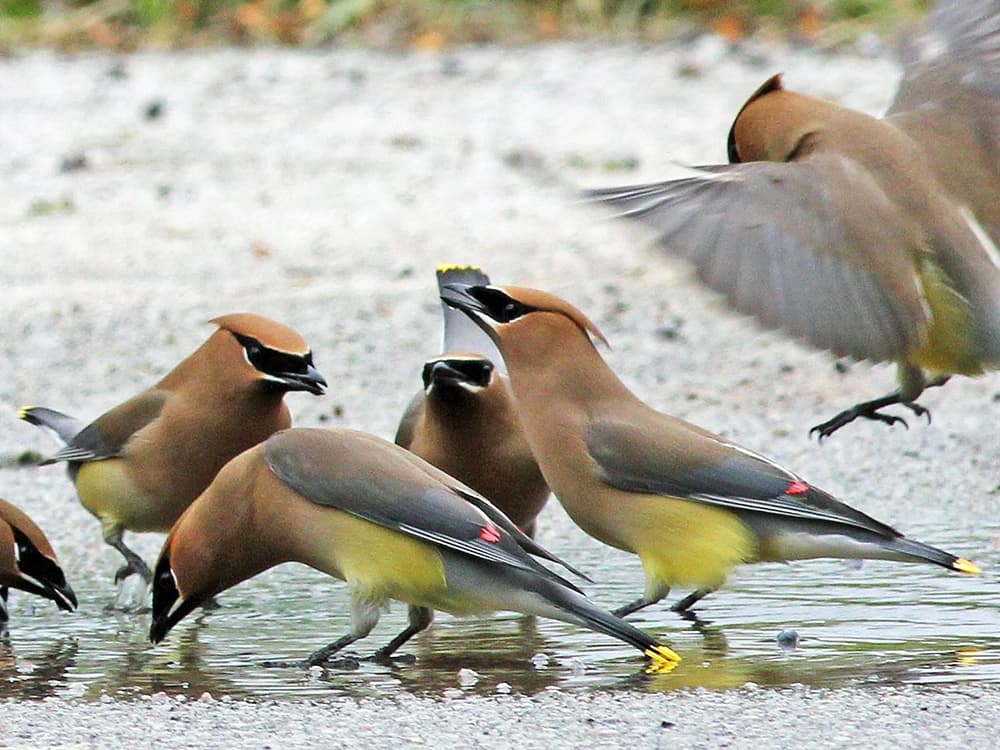 The cedar waxwing cannot be mistaken for any other bird due to its specific plumage. These birds are medium-sized and they are mostly brown, with specs of yellow and gray. They breed in open woodlands in Canada, while winters are spent in the US and Central America. These songbirds eat berries and other small fruits that they pluck from the tree in mid-air. 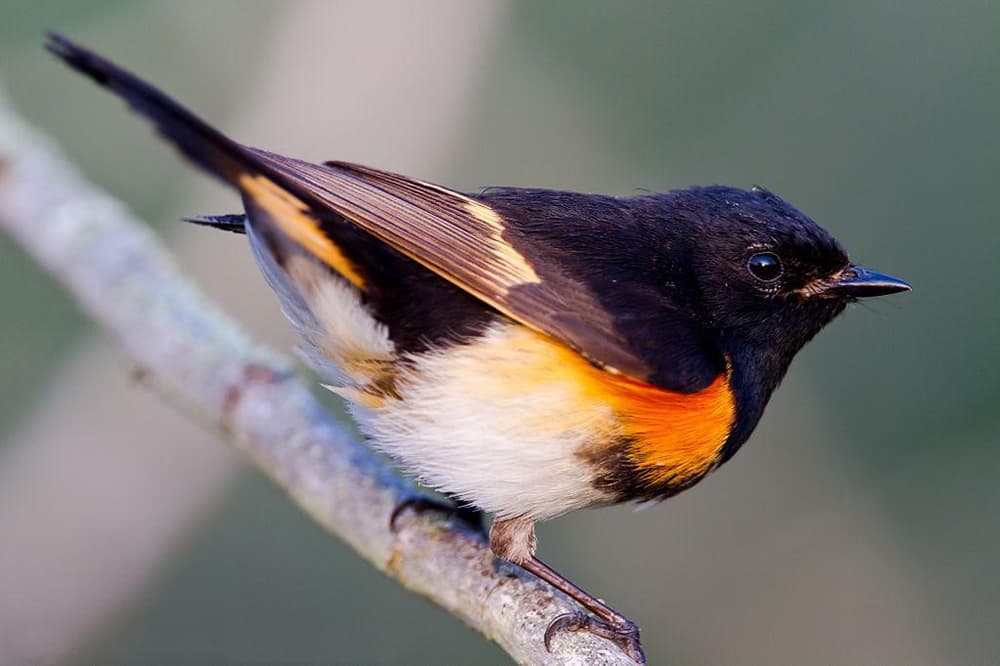 The American redstart can be found hopping from branch to branch seeking insects. Its head, neck, and chest are coal-black, but they can be easily identified due to the bright orange sides and tail. Females or immature birds can have lighter orange patches combined with gray, instead of dark black. 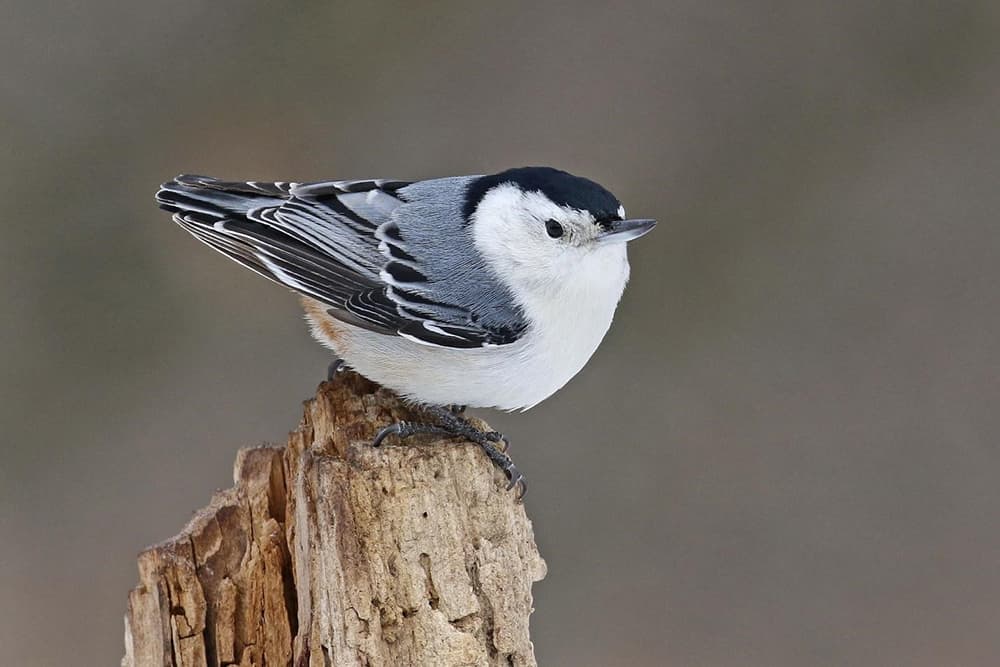 This small songbird comes with a distinctive white vest and clean grey back. They enjoy seeds and insects and they are named “nuthatch” because they usually crack large acorns by slamming them into tree bark, then they use their small and pointy bill to hatch the seed. Despite their small size, their songs are very loud. 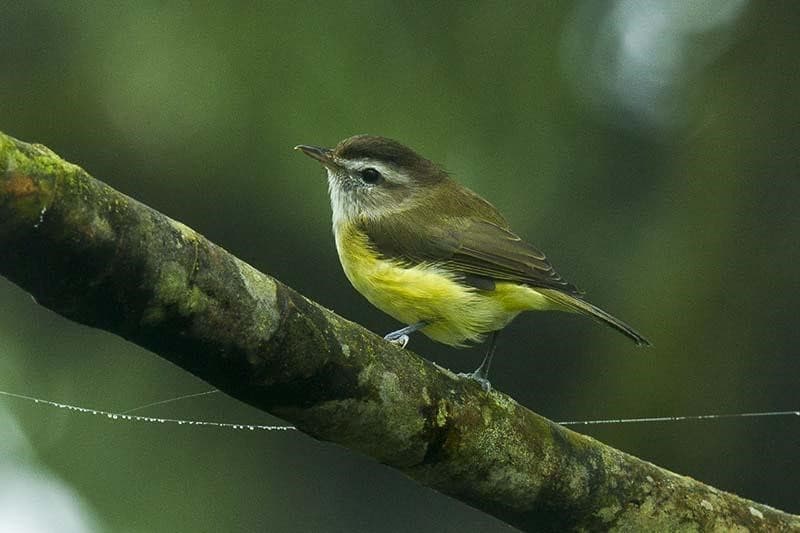 Birds in the Vireonidae family are olive green, tiny, and love insects. They have a repetitive and strong song and they can only be found in the New World. Eight species can be found in Canada and only one of them breeds in Ontario, during spring, at Point Pelee. 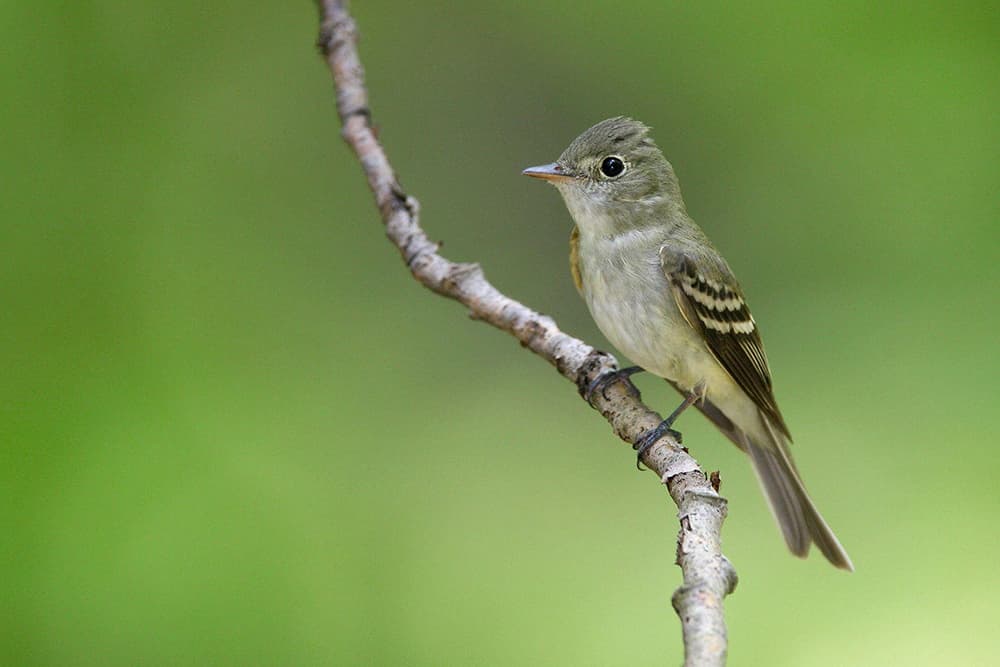 The tyrant flycatcher is a large bird and they are usually light or vivid green. Their name is derived from the fact that they catch insects and then return to a branch to eat them. One of the distinctive features, apart from its colors, is the loud and abrupt call that you can easily notice across Canada. 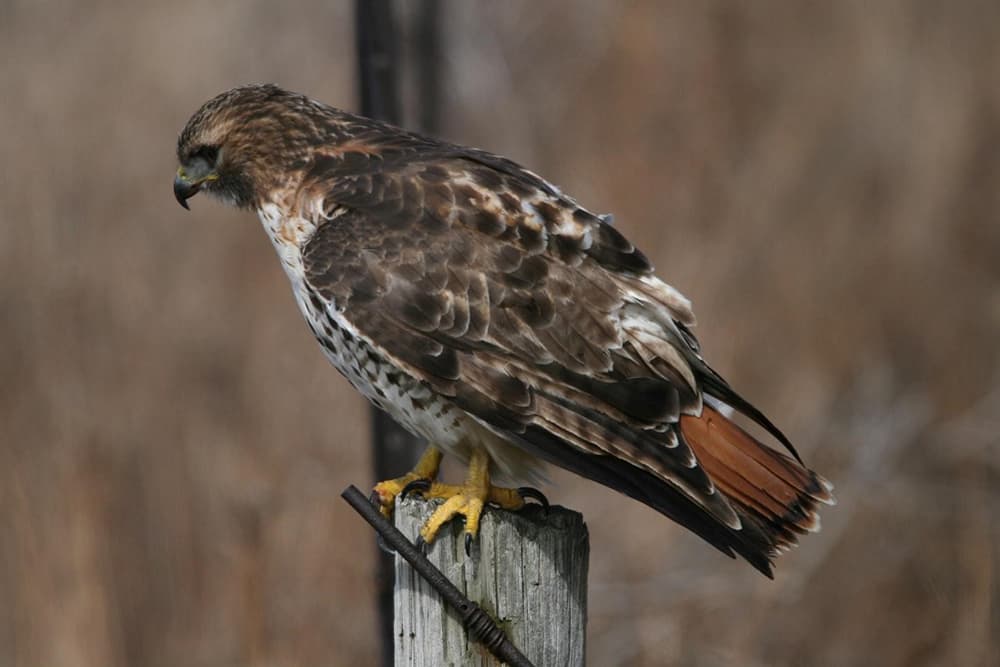 The red-tailed hawk is one of the most common types of hawks in North America. You can find them in Ontario during fall when they migrate, reaching impressive populations of up to 8,900 birds in only one season. They have broad and round wings that they use to soar in open fields. 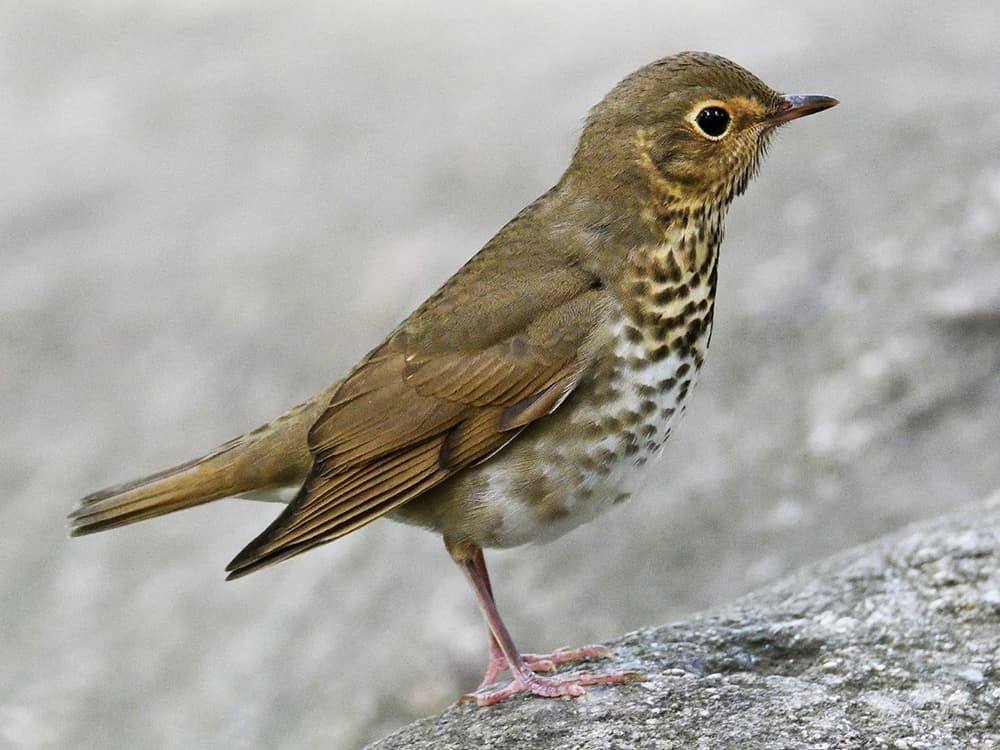 The wood thrush is a medium-sized beautiful bird with round eyes and a shape similar to the robin. They are brown with a few white specks on their chest. Both females and males are similar, and they can be found on the ground. They search leaf litter or ground for small larvae, insects, and vegetable matter. The wood thrush can be found in southern Ontario. 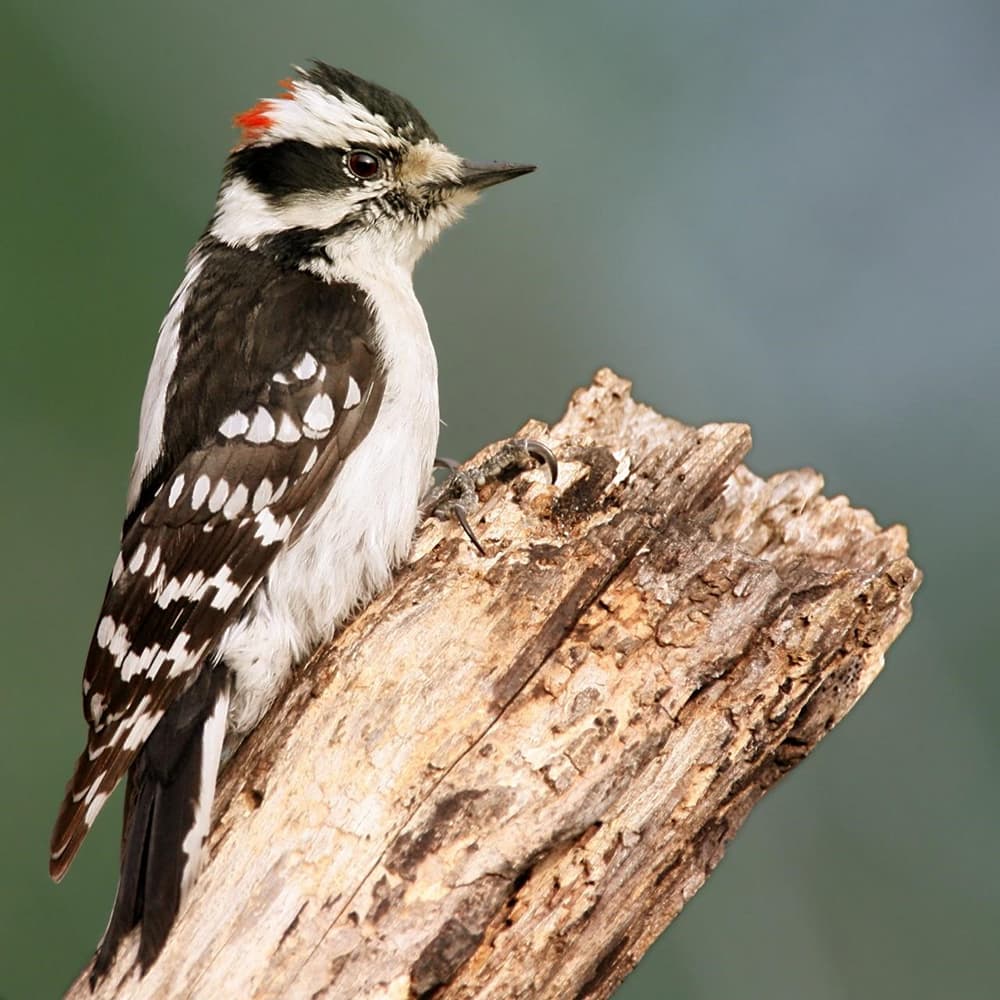 The downy woodpecker is commonly found in parks along with chickadees. They have a similar size and it is an energetic forager. Their plumage is a beautiful combination of snow white and coal black, but they can be quite challenging to identify for beginners due to the similarity with the hairy woodpecker, the only difference being the size.

Snowy owls are beautiful birds with a short, bulky body and dense feathers. Due to the black specks, they look like adorable salt-and-pepper birds. The snowy owls can be found in open fields and prairies, including in southern Ontario, but they breed in the Arctic during spring. 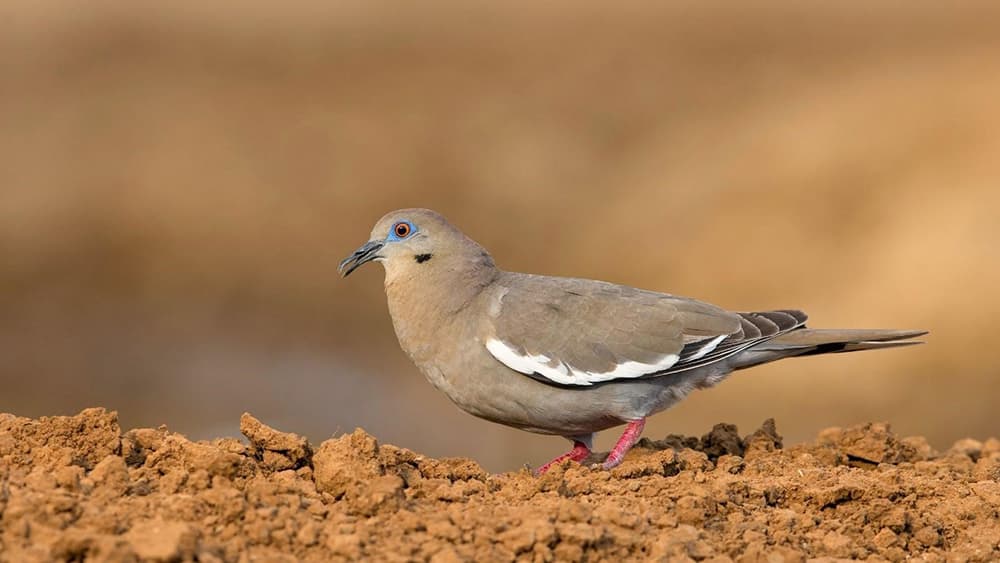 The white-winged dove is a common bird in many cities. It has a coffee-brown plumage with a few black spots on the upper side. The neat white lines across the feathers are the only aspects that make them different from the mourning dove. The colorful face can help you easily identify the bird.