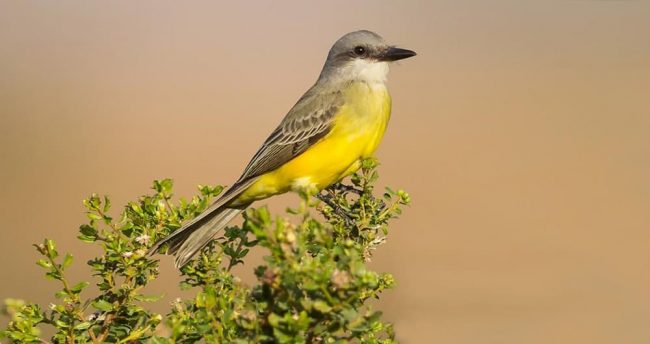 If you live in British Columbia, Canada, or you are planning a visit, you perhaps already know that the rich nature encourages wildlife. There are numerous popular birds in the region, while some species can be quite a rare sight. If you are equipped with your high-quality monocular specially designed for birdwatching, you are ready to observe some astonishing winged friends in British Columbia. You can also check out this photographic guide to learn exciting facts about the birds you can find here. 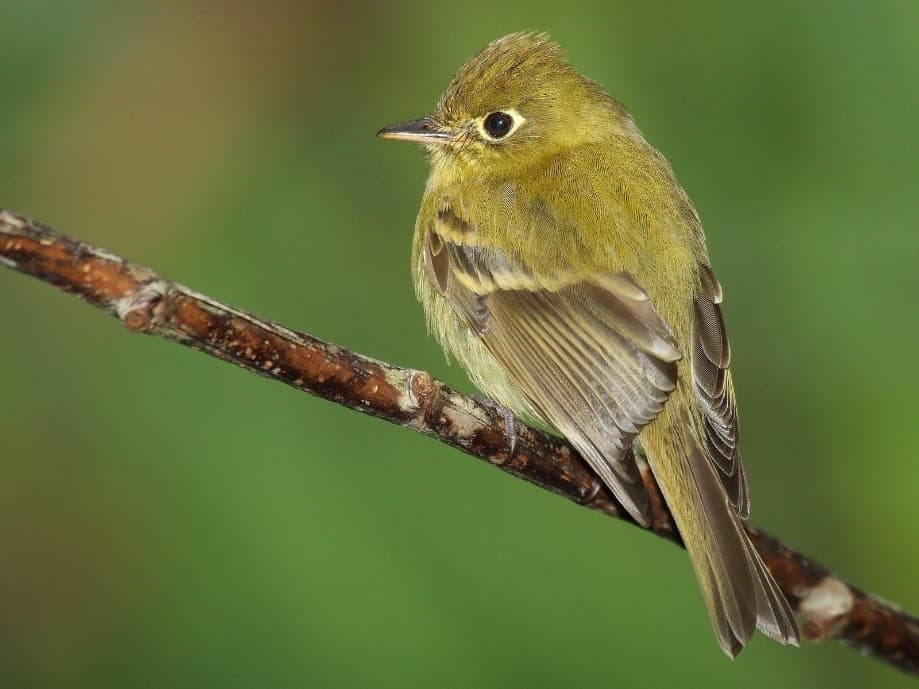 This tiny specimen is part of a large family known as Tyrannidae. The size may range from robin-sized birds to warbler-like fluffy, plump avian friends. This impressive diversity is what guarantees us that we can easily spot these birds in British Columbia. You can identify them thanks to the olive-colored plumage and insectivorous behavior – they actually catch their food during flight. 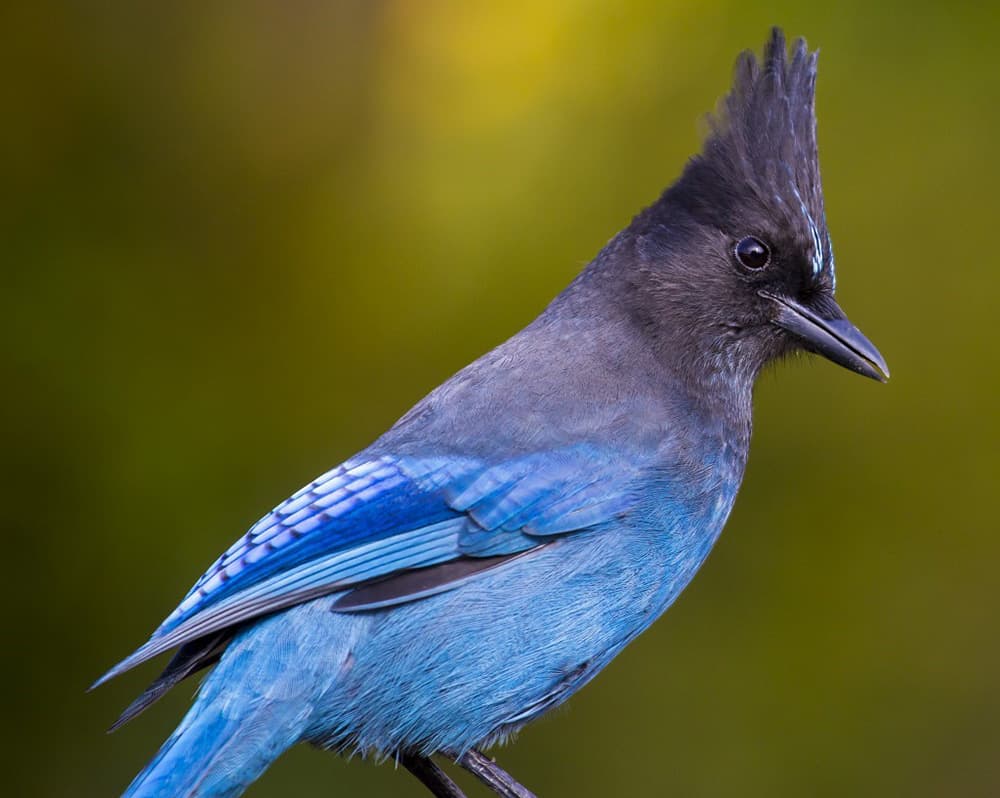 The beautiful Steller’s jay has a hilarious large head due to its upright crest and bright blue feathers. The head is often black, and there are a few white speckles on the wings so that they might seem quite a dark blue from afar. Similar to other jays, Steller’s jay is incredibly smart (and noisy). They enjoy spending their time in the forest. 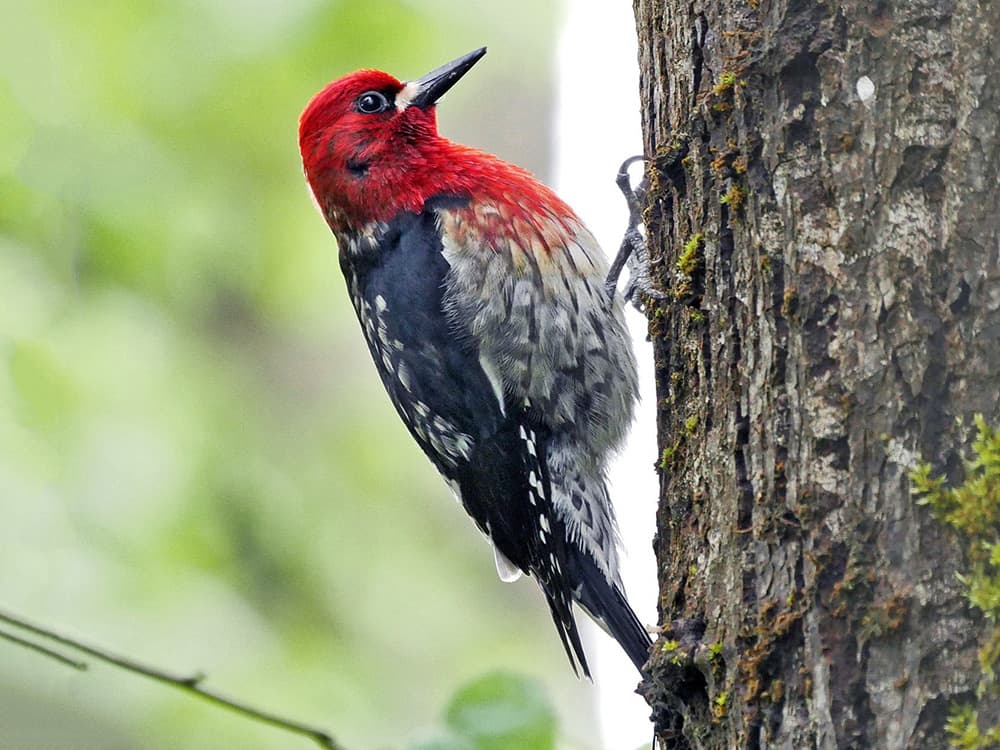 A relatively small woodpecker, the sapsucker is a breath-taking sight. Its crimson head and chest cannot be easily mistaken, while the long and powerful bill is used to drill into the tree bark. The sound is similar to the morse code as it has irregular beats. You may also find some hybrids in British Columbia, but they can be pretty challenging to identify. 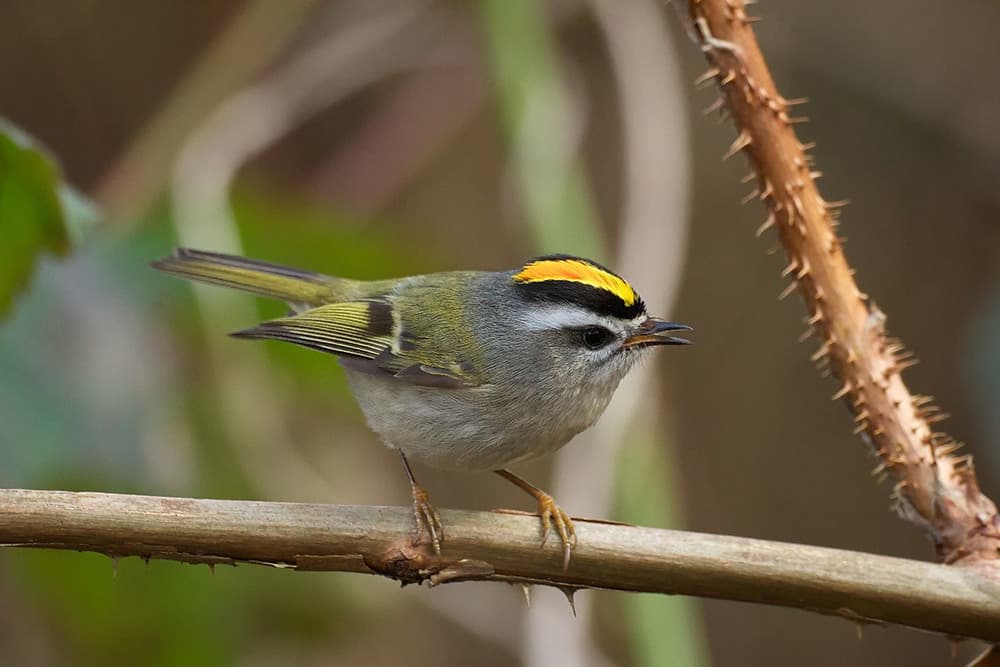 Kinglets are true wonders of nature. They are as small and as active as possible. They spend their time in conifer forests, and you can recognize the tiny body with a yellow stripe on their head, thus the name (“golden crown”). It is an adorable songbird that loves tall trees; when it panics, the golden crown turns into an orange crest. 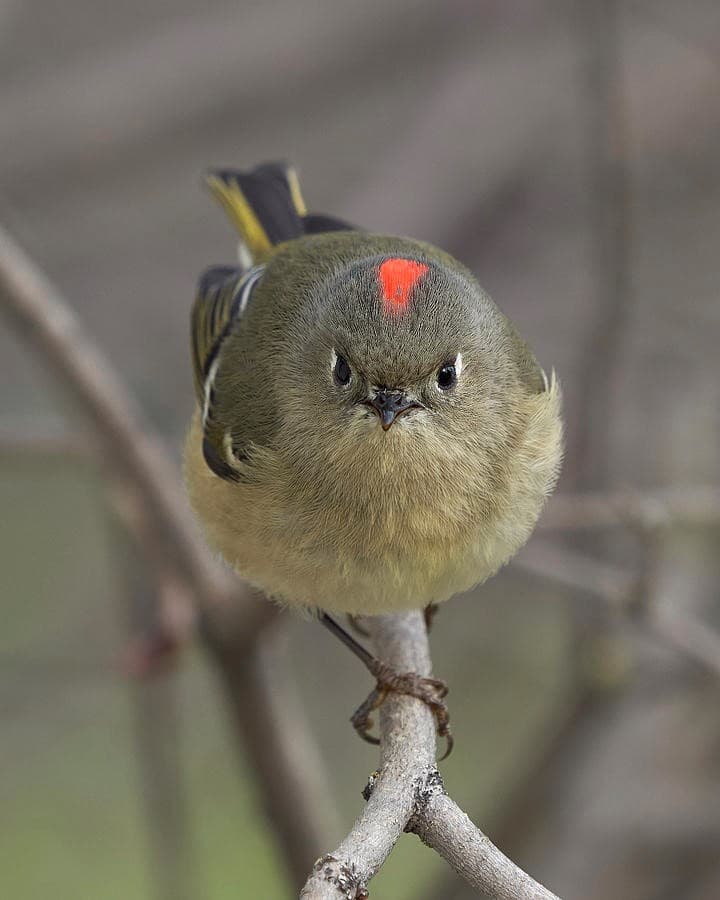 This kinglet has an olive color with a few greenish nuances on the wings. The “ruby crown” turns into a bright crest, but only for males. Like the golden-crowned kinglet, the bird loves forests and any other wooden areas where it stays during winter and migration. You can sometimes find it searching for food on the ground while singing along with other songbirds. 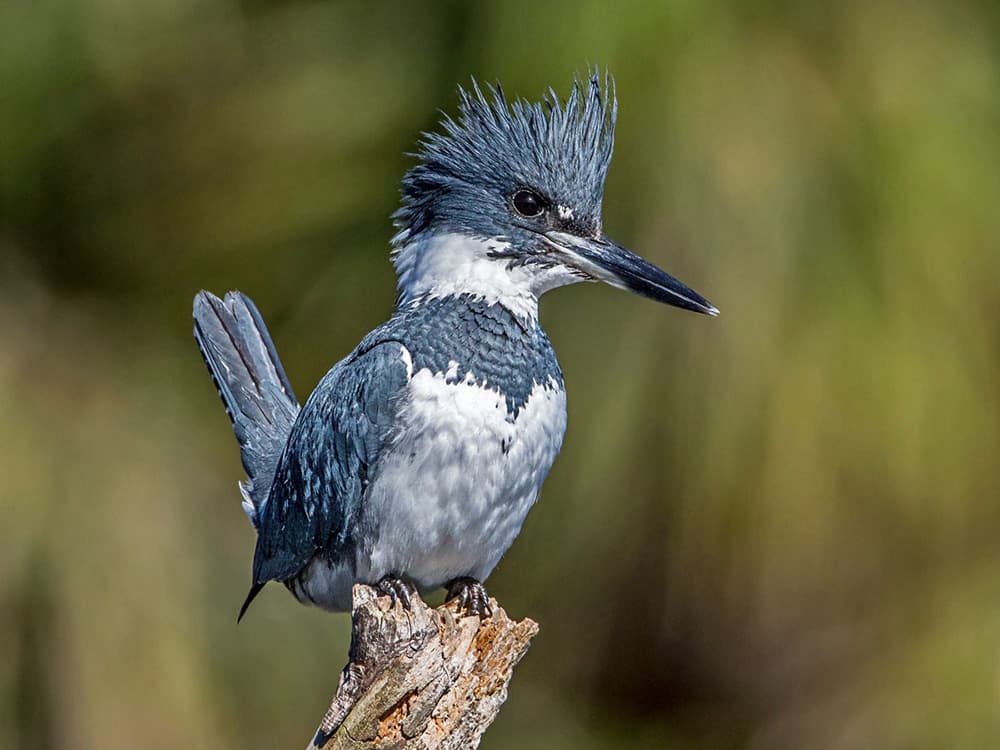 The belted kingfisher does have some impressive style due to its tall crest and impressively long bill. It has a blue/grey appearance with an entirely white collar and underbelly. The kingfisher loves water, so you will find it near estuaries, streams, and other water sources. As the name suggests, it feeds on fish by plunging into the water. 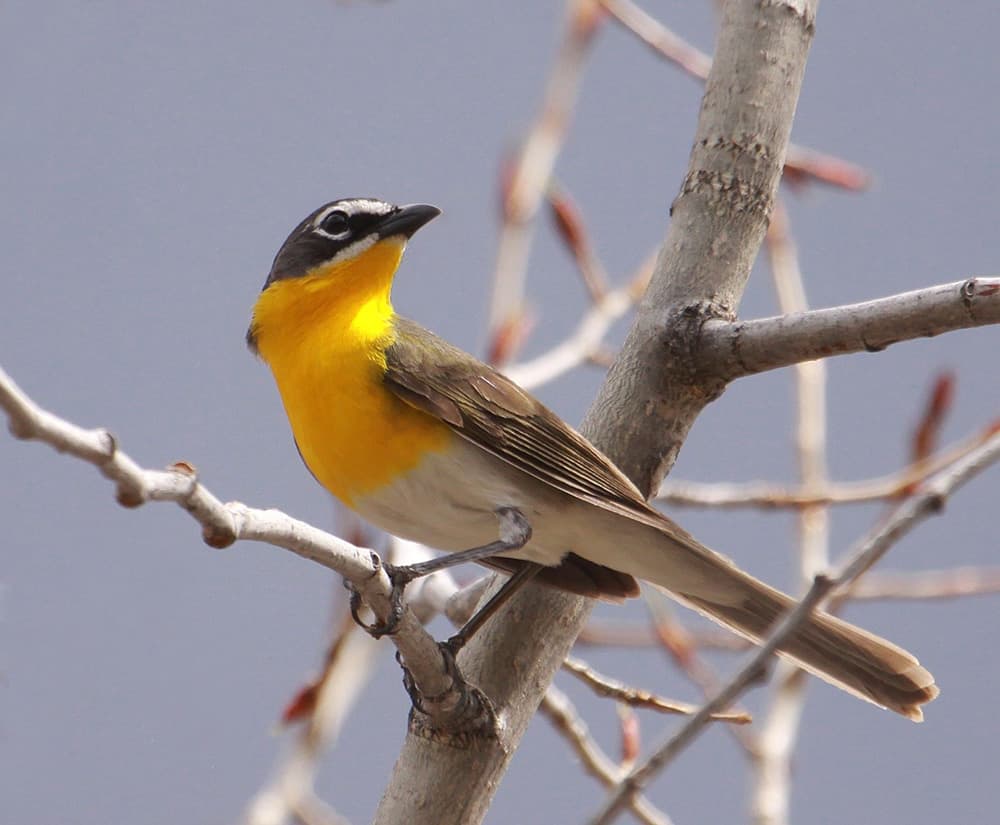 This peculiar-looking bird has a long neck and bright yellow-orange neck and chest. It has contrasting white stripes and an eye-ring that makes it easy to spot. However, you may find it challenging to search for it because it loves shrubs and dense thickets. It’s best to look for it during the mating season as it often puts on a flying show for its mate. 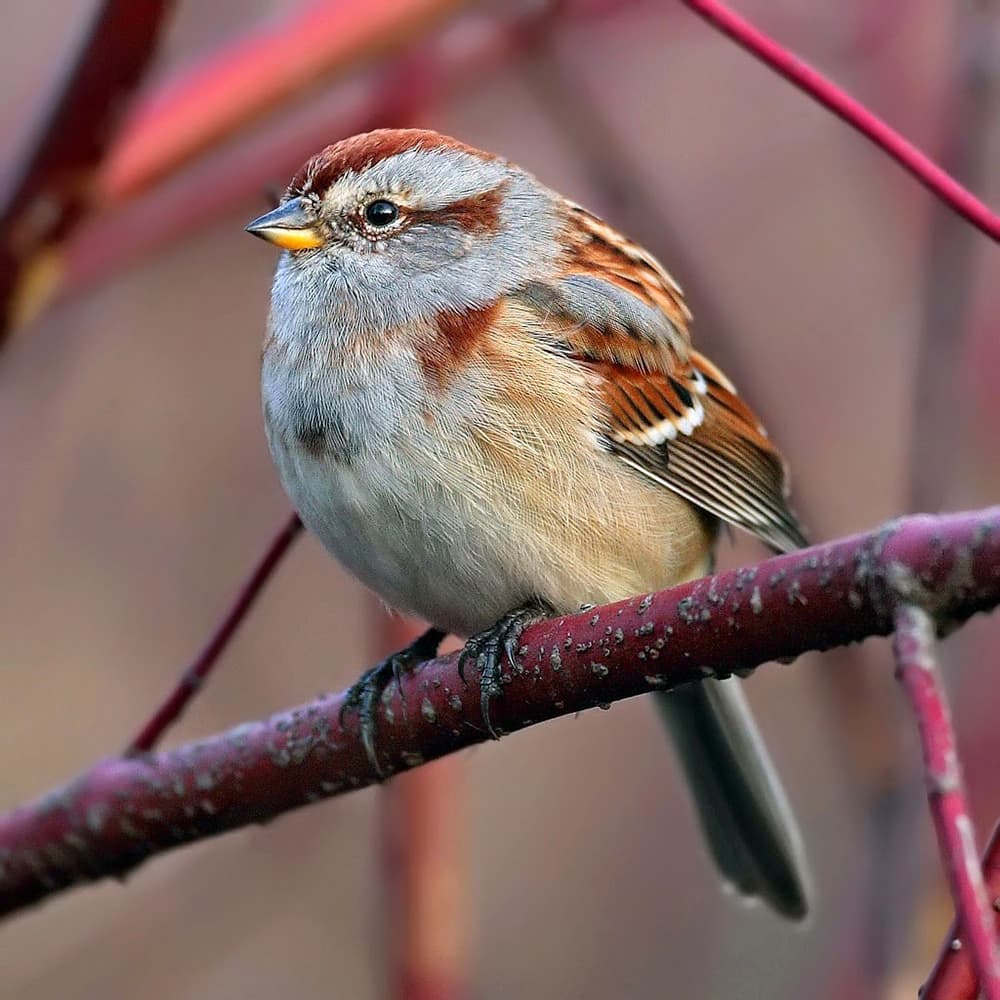 The plumb birdie has a tiny body with a short, thick bill and a thin tail. It has a few rusty feathers, especially around its head and wings. The rest of the body is gray. Similar to other sparrows, the American tree sparrow can be found hopping happily on the ground looking for food. Its musical twitter cannot be mistaken, either. The bird is friendly, loves visiting gardens, and you can find them in shrubby areas during winter. 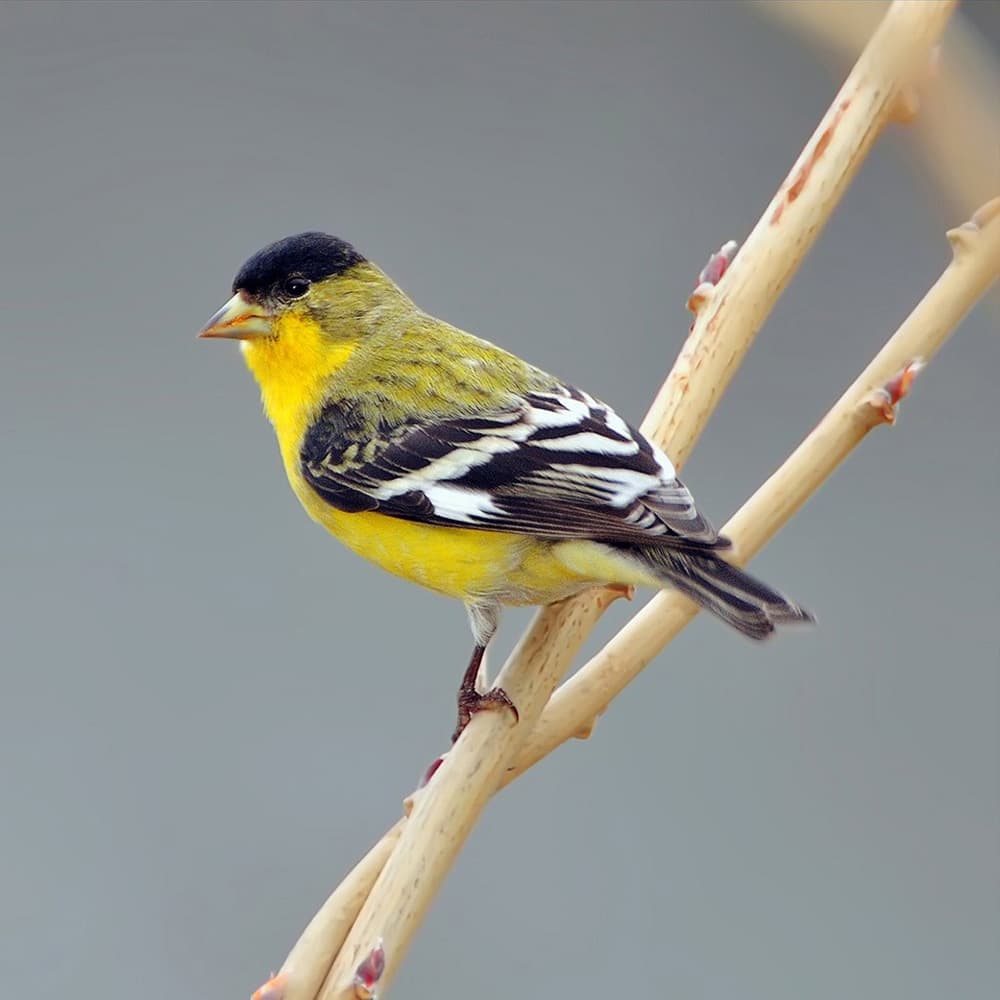 The lesser goldfinch can be easily overlooked due to its tiny size. Despite this, it has a powerful, chiming song that tells you it is present in your area. You may find small flocks in fields or trees next to streams. Males have a complex song that usually imitates the notes of other nearby birds. 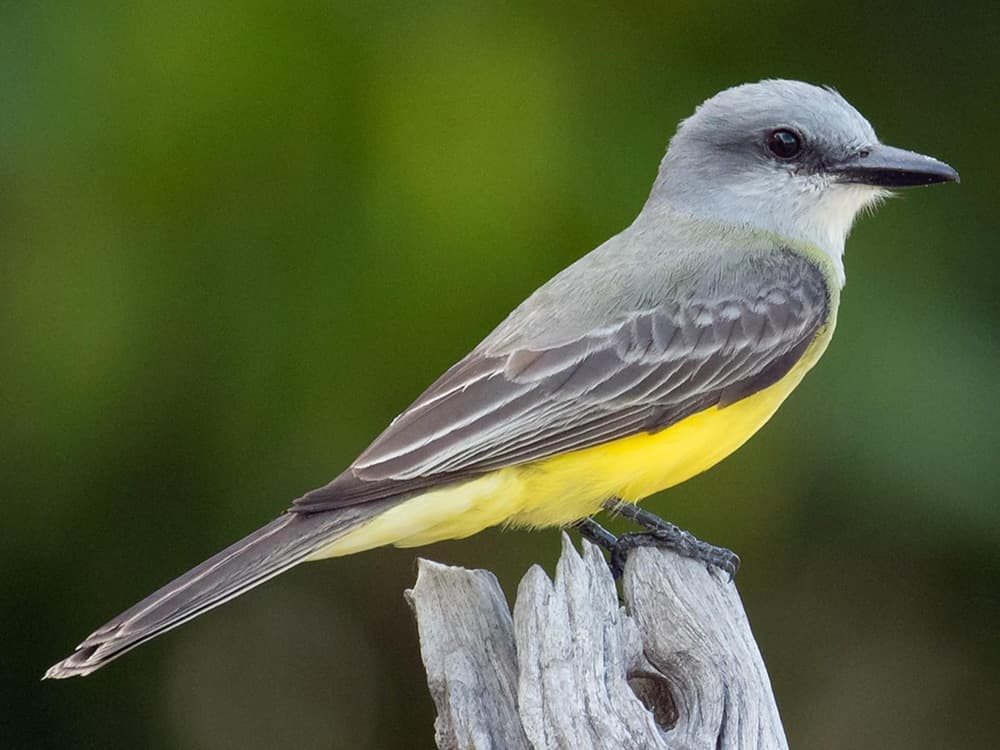 One of the most common birds is the tropical kingbird. The name comes from the fact that it is widespread in the American tropics. This flycatcher has a greyish upper body with a bright yellow underbelly. It is the quietest species among other types of kingbird, and it loves eating fruits, insects, berries, and even frogs. 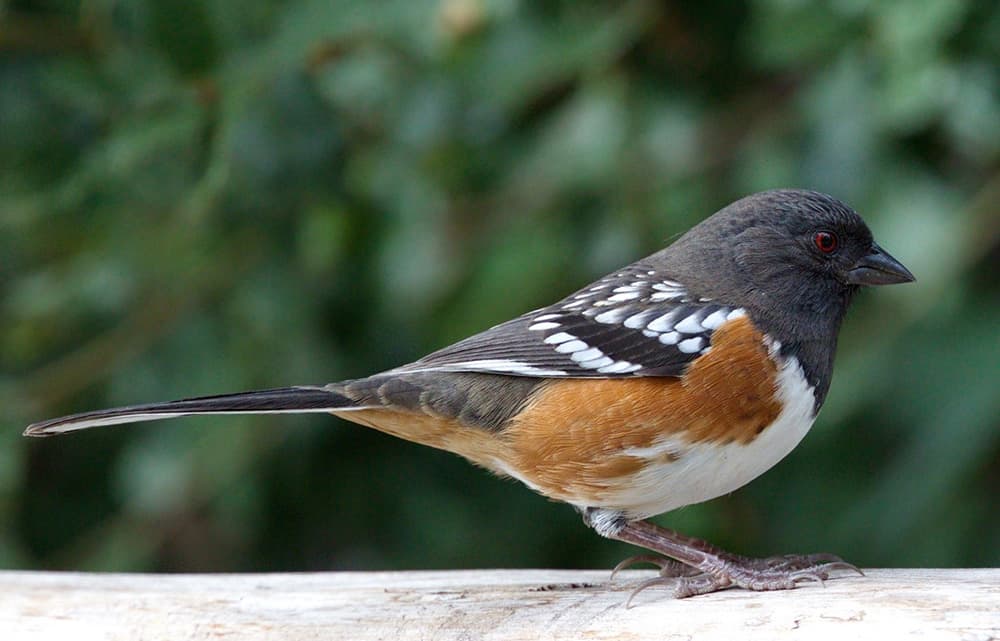 The spotted towhee has a suggestive name. It is a small bird with a long, thin tail, white spots on its feathers, brown sides, and a white underbelly. The song is quite harsh, similar to scratching noises, which makes it easily recognizable by seasoned birdwatchers. 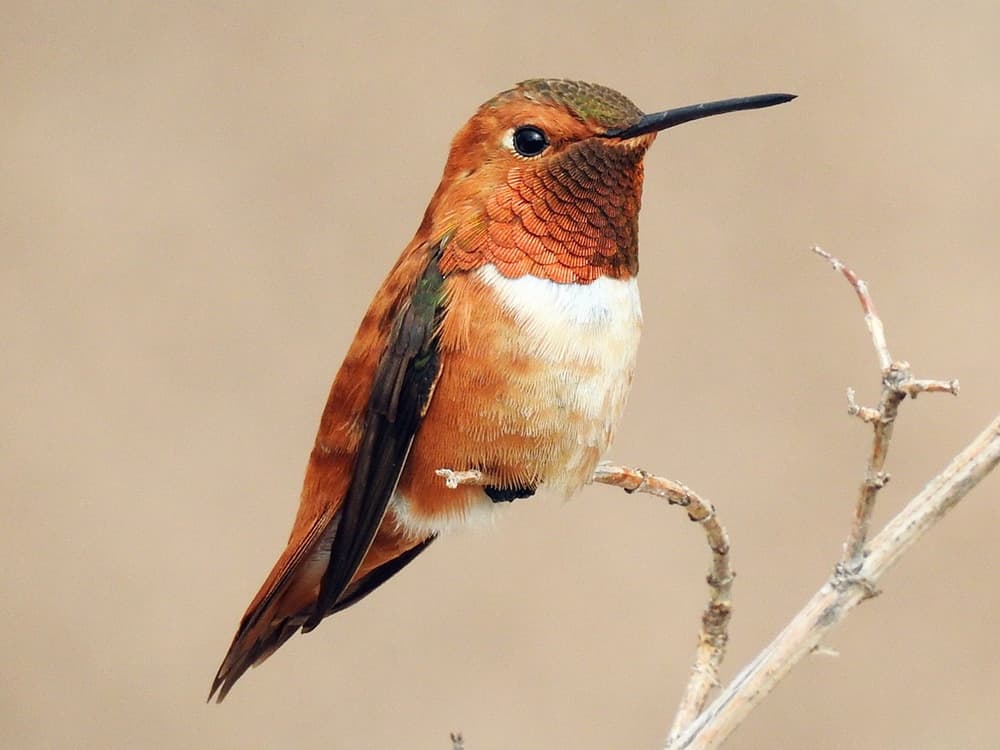 Looking just like a copper coin, the tiny rufous hummingbird cannot be missed if you are in British Columbia. It is the strong defender of its favorite flowers, sending away all intruders, no matter their size. This birdie enjoys mountain meadows, forests, and other similar areas. It moves to food-abundant regions during the winter and always prefers to stay nearby flowers. 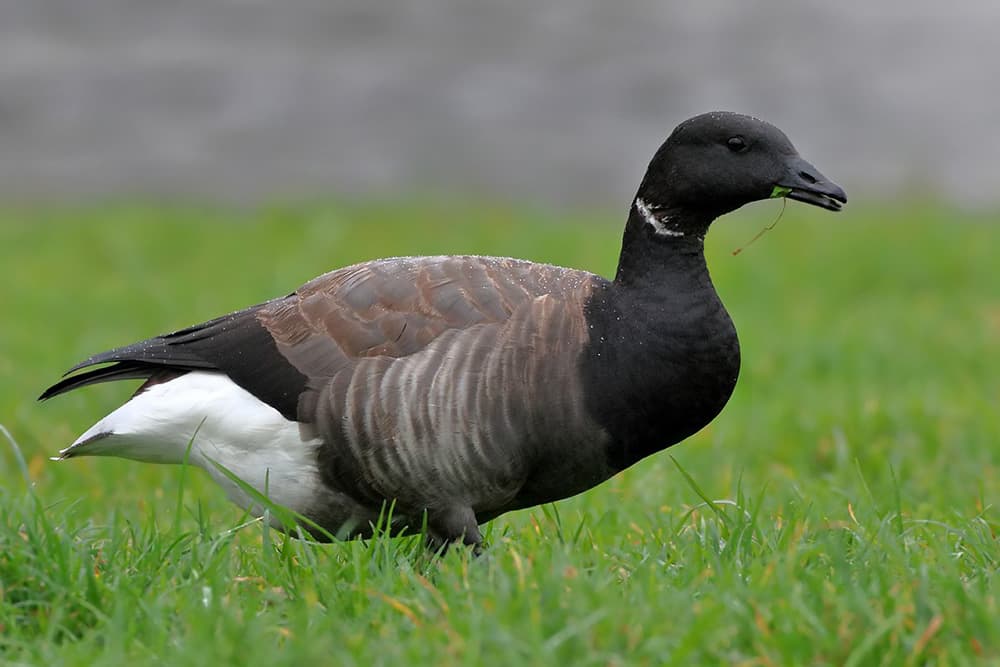 This waterfowl has a pitch-black head and chest with only a thin white necklace around its neck. The rest of the brant is coffee or cream colored. Compared to other types of geese, the brant is relatively small but equally beautiful. 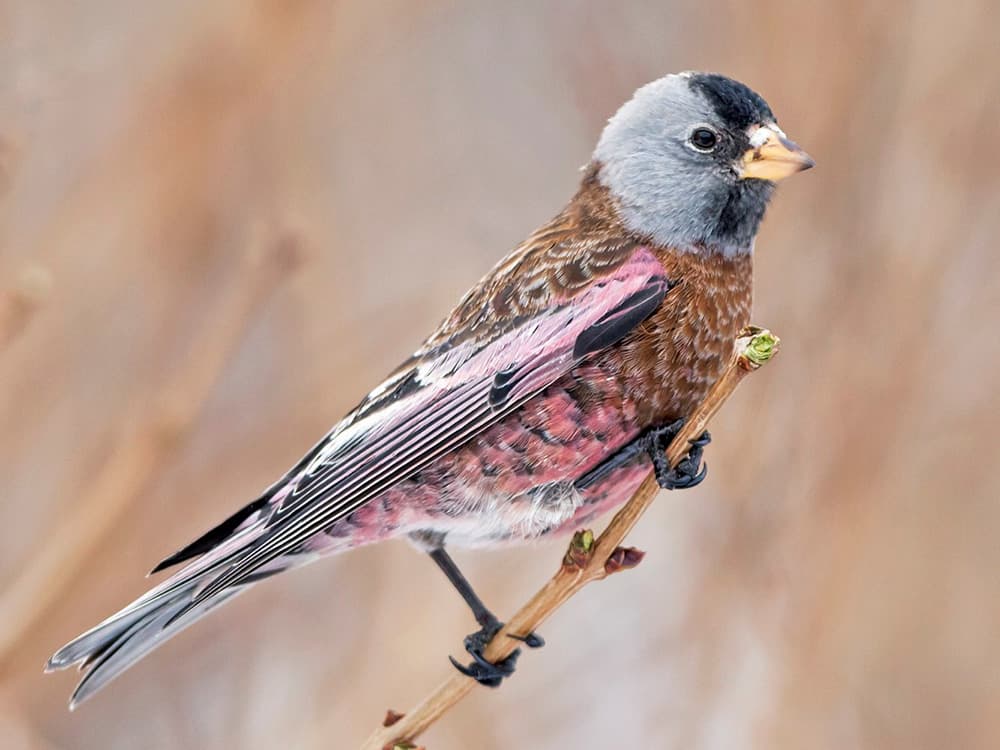 The rosy finch might seem quite unique due to its pinkish feathers and underbelly. It is native to Alaska and Western Canada, among others. It lives in rocky areas, so it is quite a rare sighting. If you are lucky enough, you can spot this rosy finch with a chocolate-colored body in winter after it descends from the mountains at the end of the breeding season. 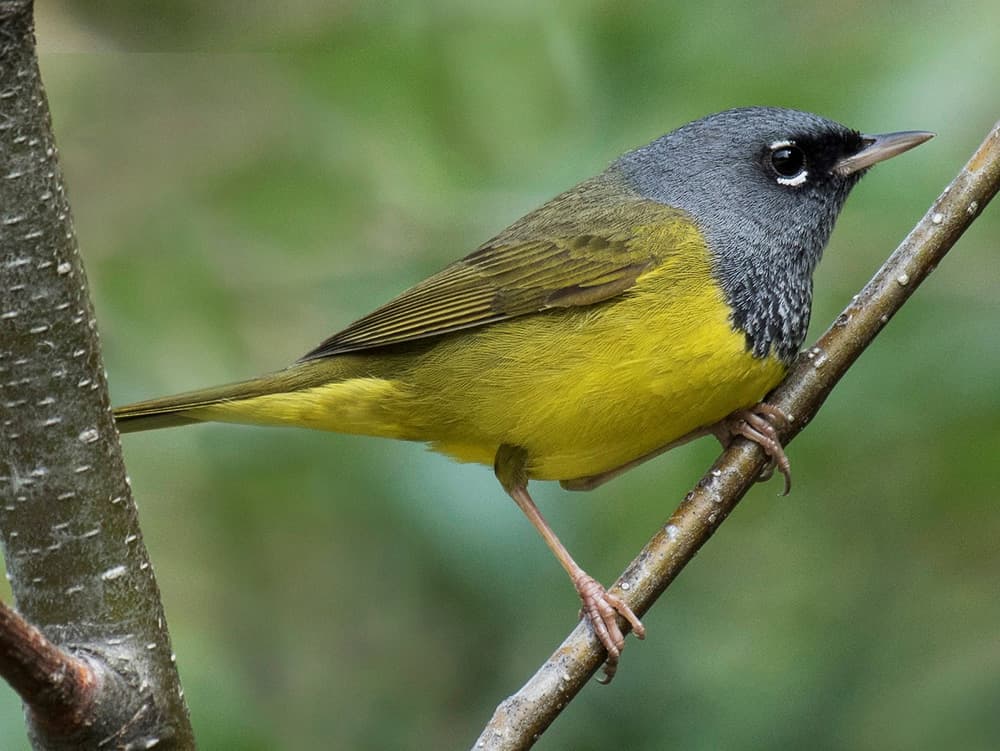 The MacGillivray’s warbler is a musical bird with distinctive olive-green feathers on its back, tail, and belly. You can also notice the white, distinctive arches around its eyes, unlike its very similar relative, the mourning warbler. The female bird looks identical, but it has significantly duller greenish upperparts. 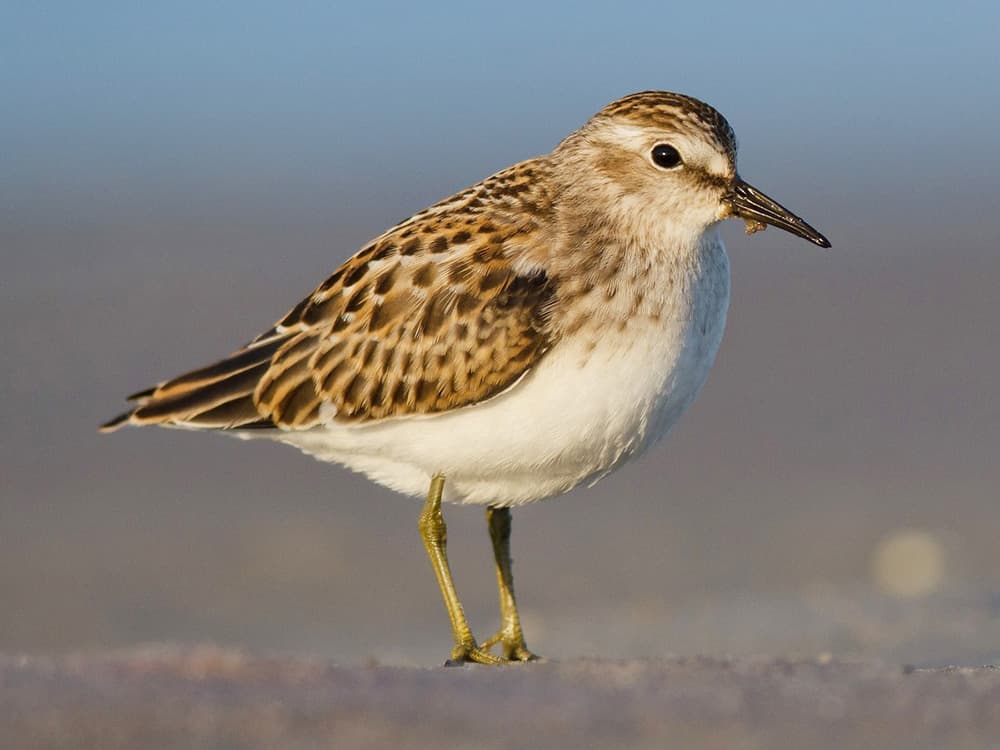 The sandpipers are also a common sight in many areas. These birds enjoy eating invertebrates that they take out of earth or mud. Most of them love damp areas, such as beaches, mudflats, and other regions along the coast. You may also find birds from the sandpipers’ family in the meadows and arctic tundra, along with woodlands and forests. 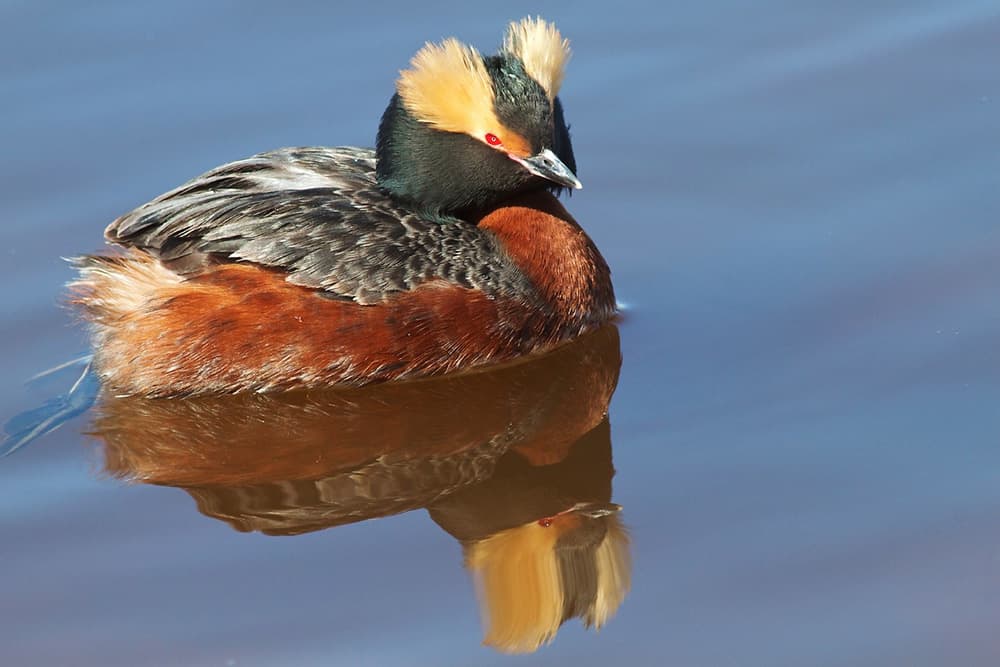 If you are down for a marvelous adventure, you should definitely check out the horned grebe. Make sure you look for it during the mating season when it has brightly colored feathers, as depicted above. During winter, these birds have a simple black-and-white appearance. You can look for it around freshwater ponds and even marshes or around coastlines in the winter. 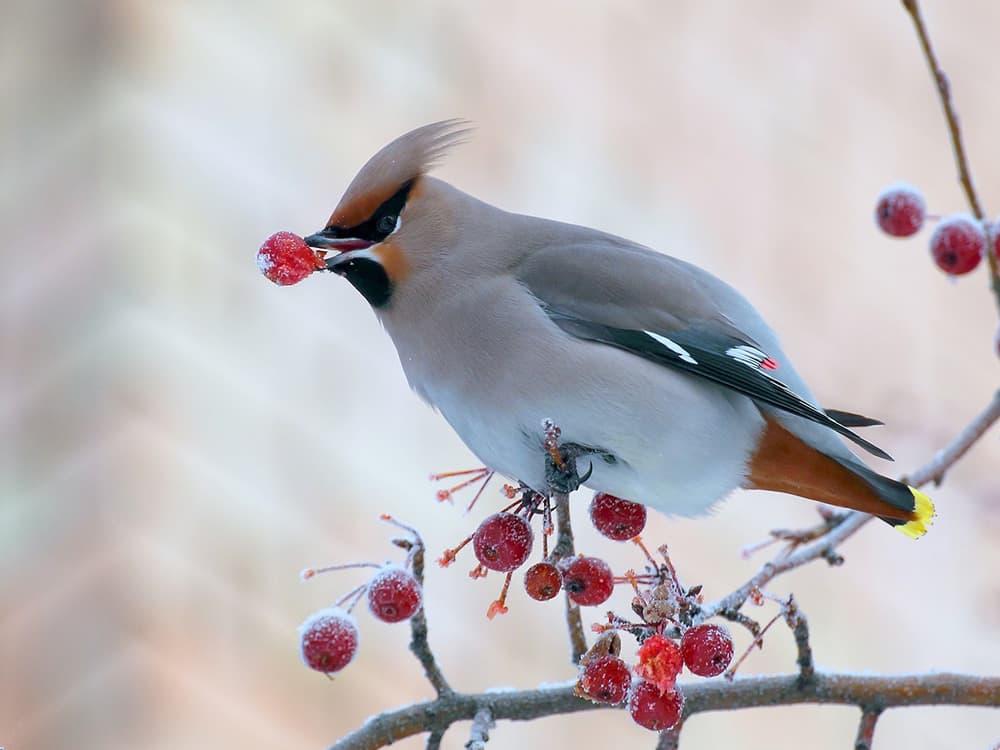 The waxwing is a smooth-looking tiny perching bird. The plumage is as soft as it looks, and it is primarily grey with a few speckles of orange on its face and under the tail. As the name suggests, the wings have a waxy tip, while the tail has a vividly yellow end. The distinctive crest also makes them easy to identify, and they are very gregarious. 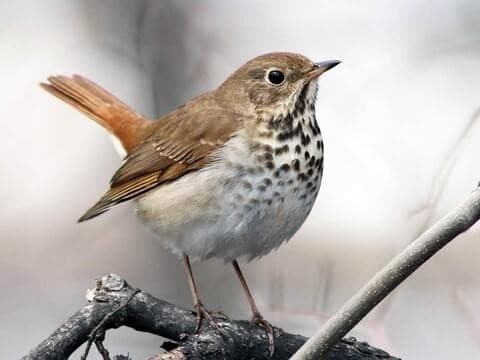 The Swainson’s thrush may not seem as impressive, but they are absolutely lovely due to their small, tiny body. The upperparts are often brown that turns into rusty red as it advances toward the tip of the tail. The neck and chest have dark spots that fade away on the underbelly. 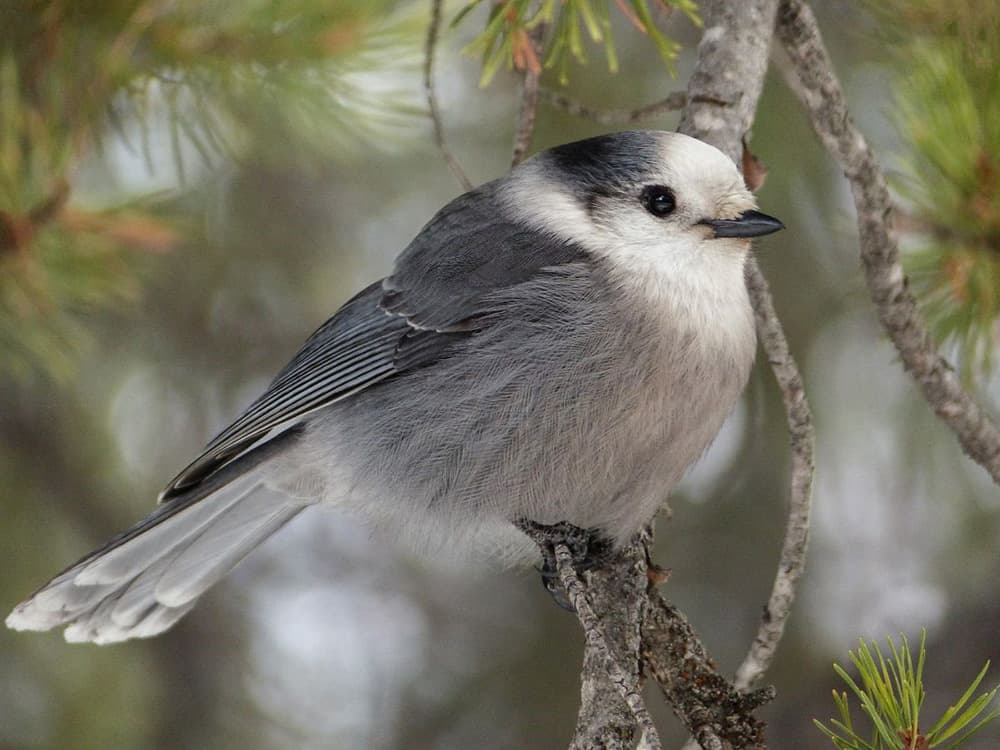 The Canada jays are quite common in the northern woods. They enjoy watching hikers due to their curious and brave nature. The fluffy bird is quite a skilled thief as it usually steals food from cabins or campsites, which is why most people call it the “camp robber.” Then, it stores food inside bark during the summer and consumes it during cold winters when it is the mating season. 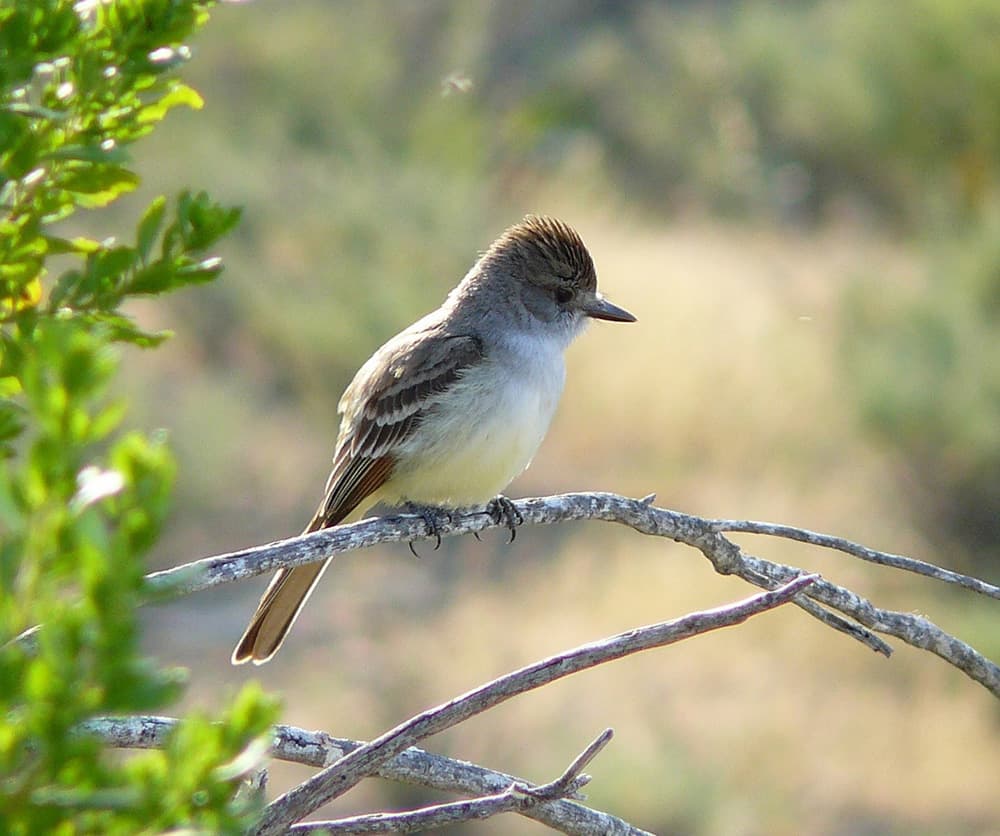 The ash-throated flycatcher is a tiny passerine that populates anything from desert scrub to open woodland. It spends its winters in Honduras and southern Mexico. You can identify it due to its long, pointy bill, small chocolate-colored crest, and white breast and underbelly. 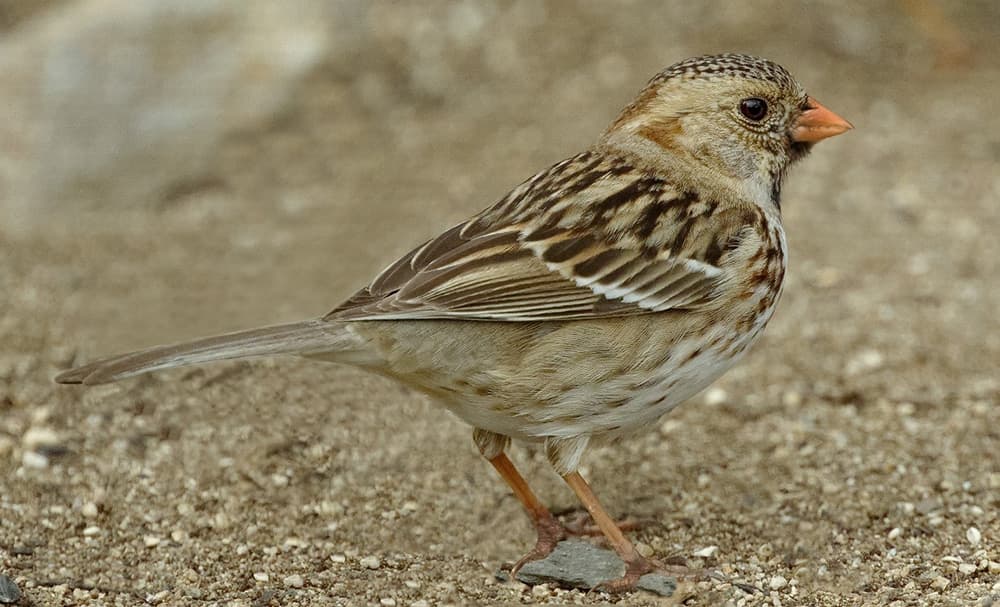 This is one of the largest sparrows with elegant attire. You can find it in Canada during nesting, and it goes to the southern Great Plains during winter. The bird is extremely quiet and shy, which is why it was firstly discovered in 1931, long after the birds in this area were first documented. 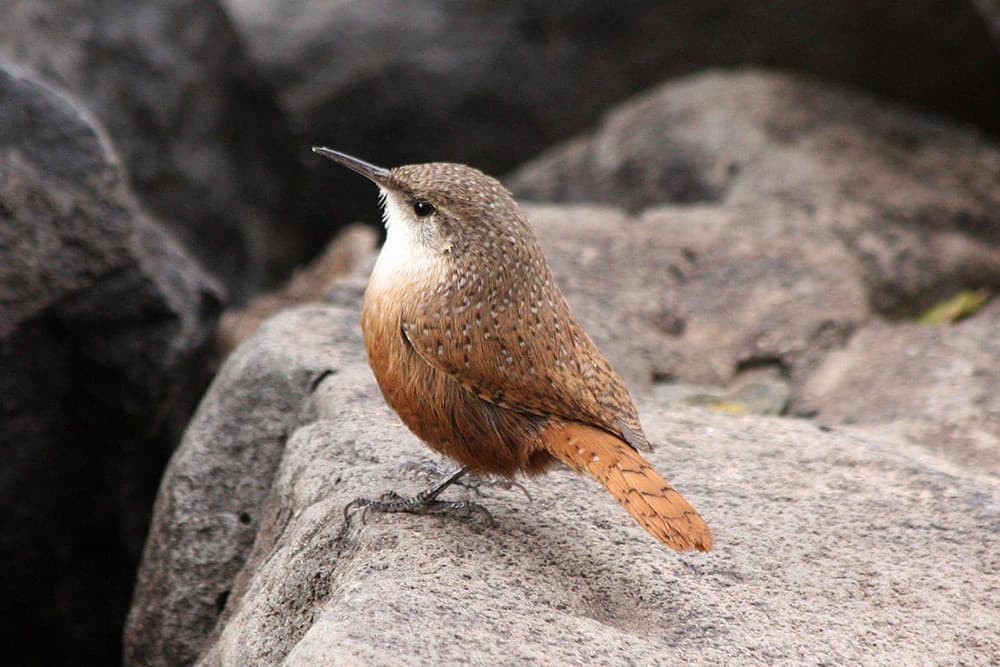 You can only find the canyon wren in the Southern Interior in British Columbia. It is an endangered species with a very small population size due to habitat change and human activity. People can help protect this species by eliminating the removal of the talus and protecting its nesting sites on the cliffs. 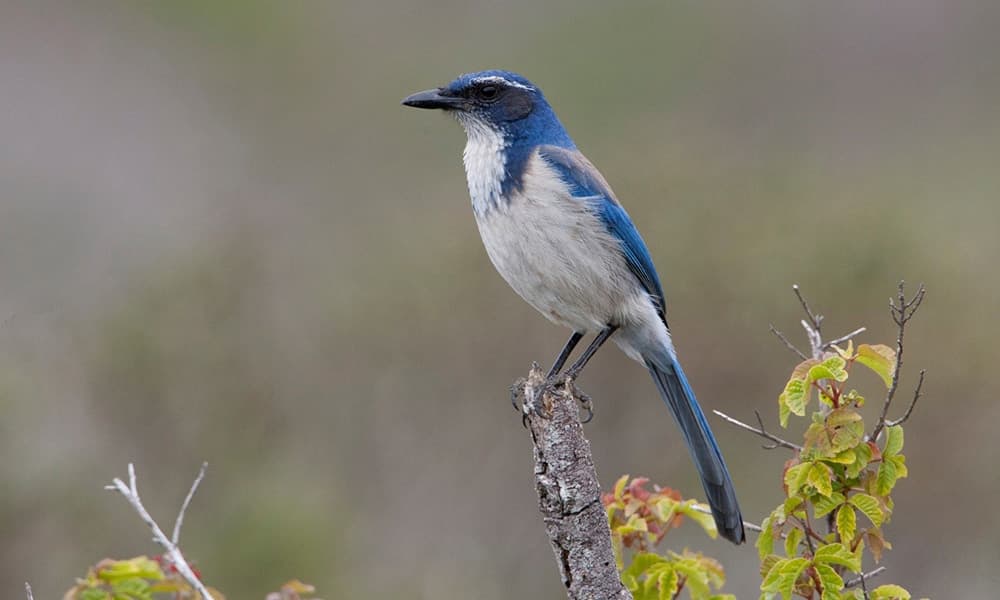 The California scrub jay comes with mesmerizing blue colors and clean underparts. This contrast makes it easy to spot, even by amateur birders. The bird is an absolute joy to watch because it is active, playful, and has beautiful songs. You can find it in large flocks in winter or fall. 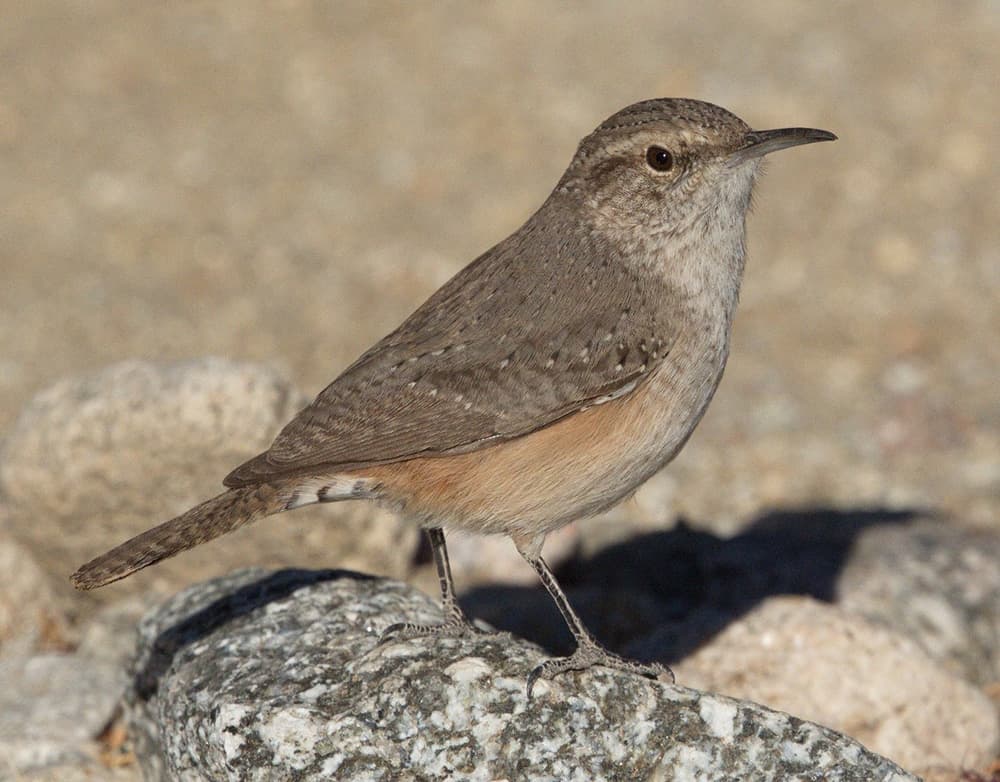 The rock wren is a small, 4.75-inches long birdie with plumage that blends well with its rocky habitat. As a result, you can find it on rocky slopes bobbing its tiny head while looking for food. Both male and female birds look similar, with a brown plumage that is slightly lighter on its neck and underbelly, turning rusty red underneath its feathers.