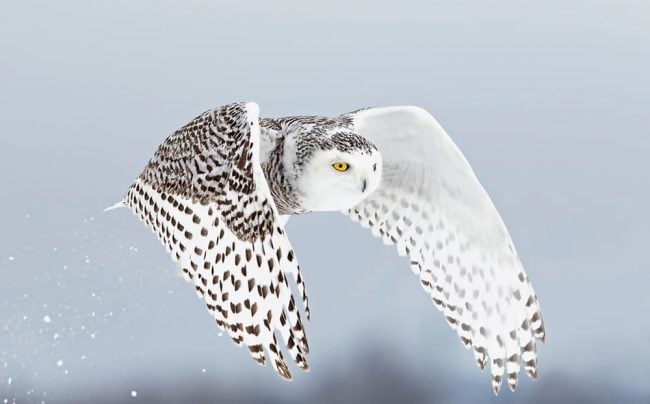 Our feathered friends are nature’s mesmerizing gifts to us and our planet. With impressive plumage, loud songs, and beautiful rituals, birds can cheer us up any day. Apart from the chickadees and robins, how many birds do you know in Alberta, Canada? Whether you want to boost your bird knowledge or you are a seasoned birder, equip yourself with a Gosky monocular and this comprehensive guide to Alberta’s Nature set. Let’s find out how many of these birds in Alberta you can spot! 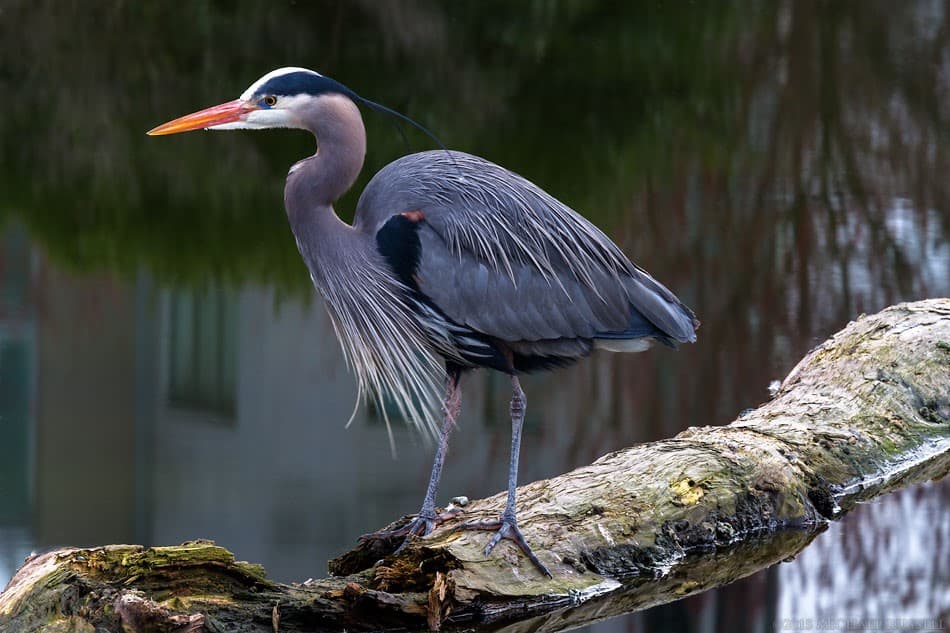 One of the first specimens you should look for in Alberta is the great blue heron. This is the largest heron you can find in the region, and you can easily identify it due to the blue feathers on its wings and bright orange beak. It is important to know that these birds are quite sensitive to noises, so make sure you keep the distance. 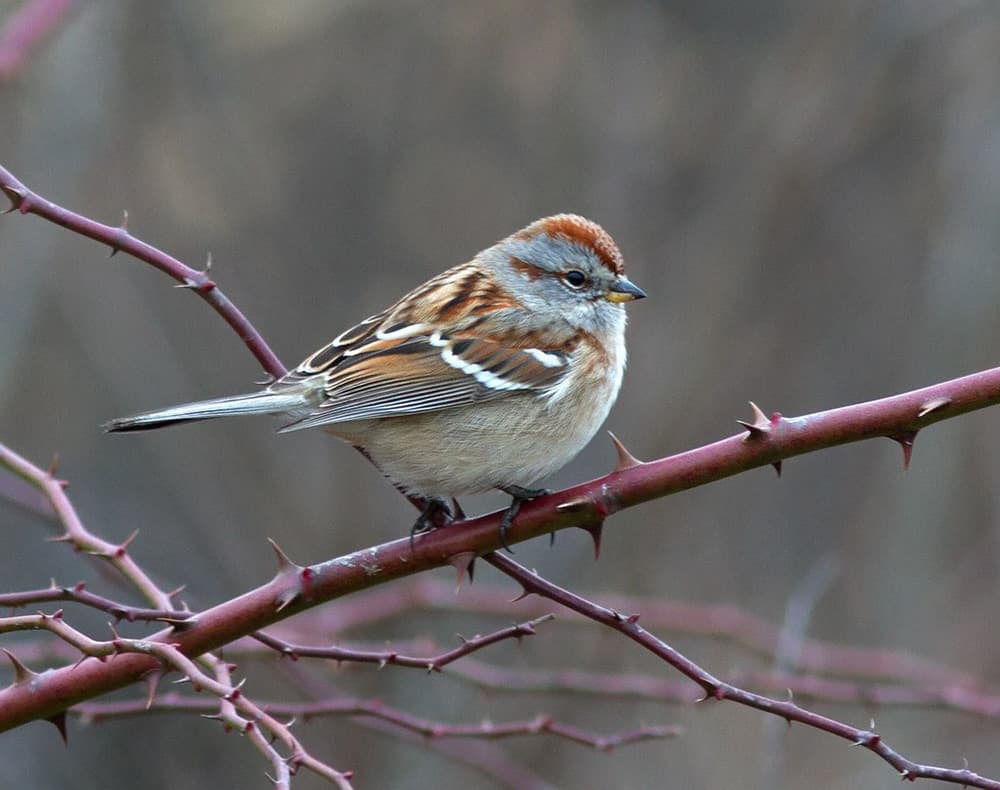 The plumb birdie is active all winter long, looking for weeds and seeds. When spring comes, they travel north to the tundra where they breed. The small sparrow can be easily identified to the red cap and a chubby, plump little body. 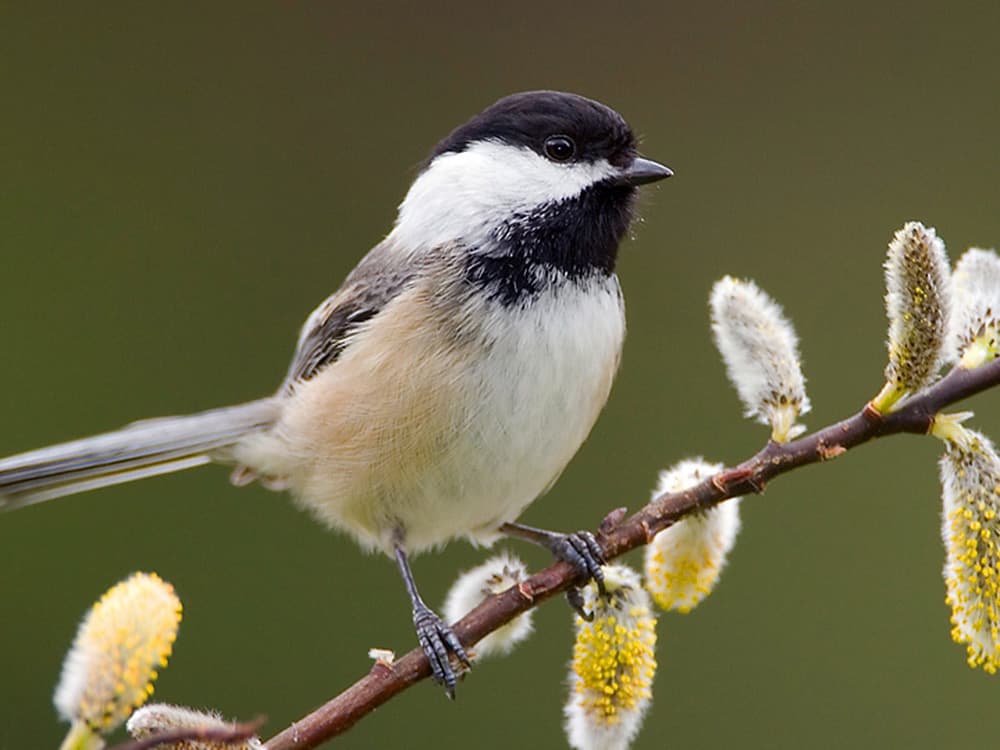 The black-capped chickadees are quite popular in Canada. And who could resist them? The large heads and small bodies, with adorable large, black cap and bib, the chickadees are pretty friendly and familiar. They are constantly looking for food that includes berries or seeds, and they also love feeders. 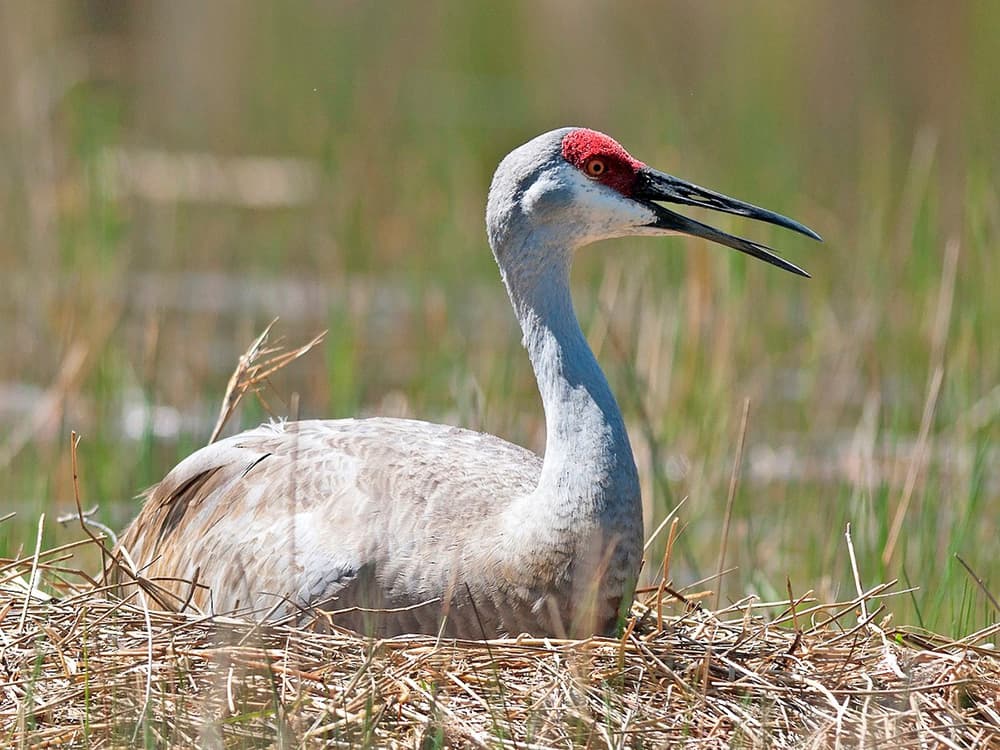 This bird is about 6.6 feet long (2-metres) when its wings are spread, and they have a loud call during the mating season. It lives for at least two decades, and it is one of the first recorded birds in history when a fossil was discovered in Nebraska, dating 2.5 million years ago. Sandhill cranes are found in large populations in Alberta during the migration season. 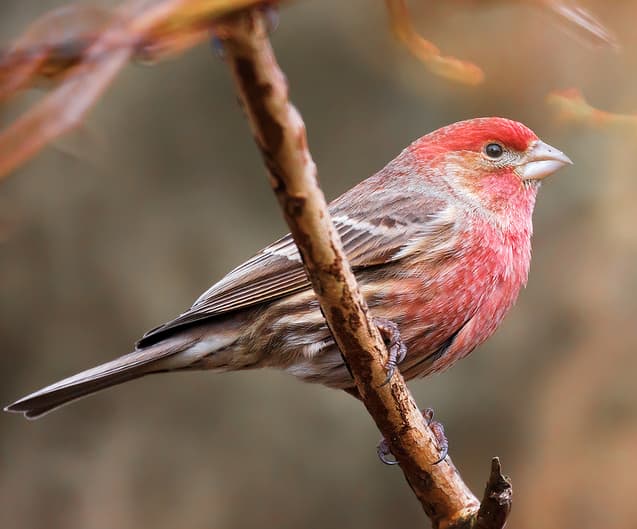 The tiny house finch may not be easy to see, but you’ve definitely heard its song before. It resembles delicate twittering, highly common in North America. Similar to the chickadee, the house finch is friendly, joyful, and loves feeders. They love any environment, ranging from cities to rural regions, forests, or even deserts. 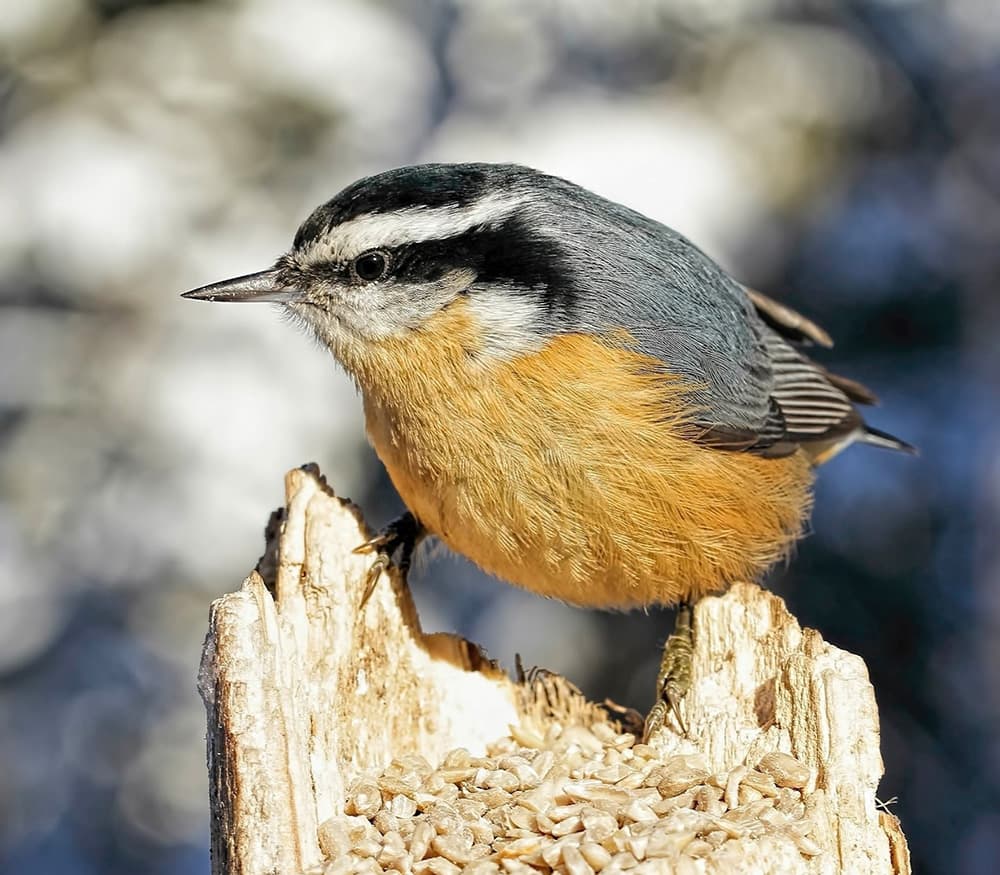 The red-breasted nuthatch is highly distinguishable due to the tiny, plump body and very short neck. These birds have white stripes on their head, a black cap, and a rust-like reddish nuance on their belly. They can be easily spotted in Alberta around trees, including hemlock, pine, poplar, and spruce. 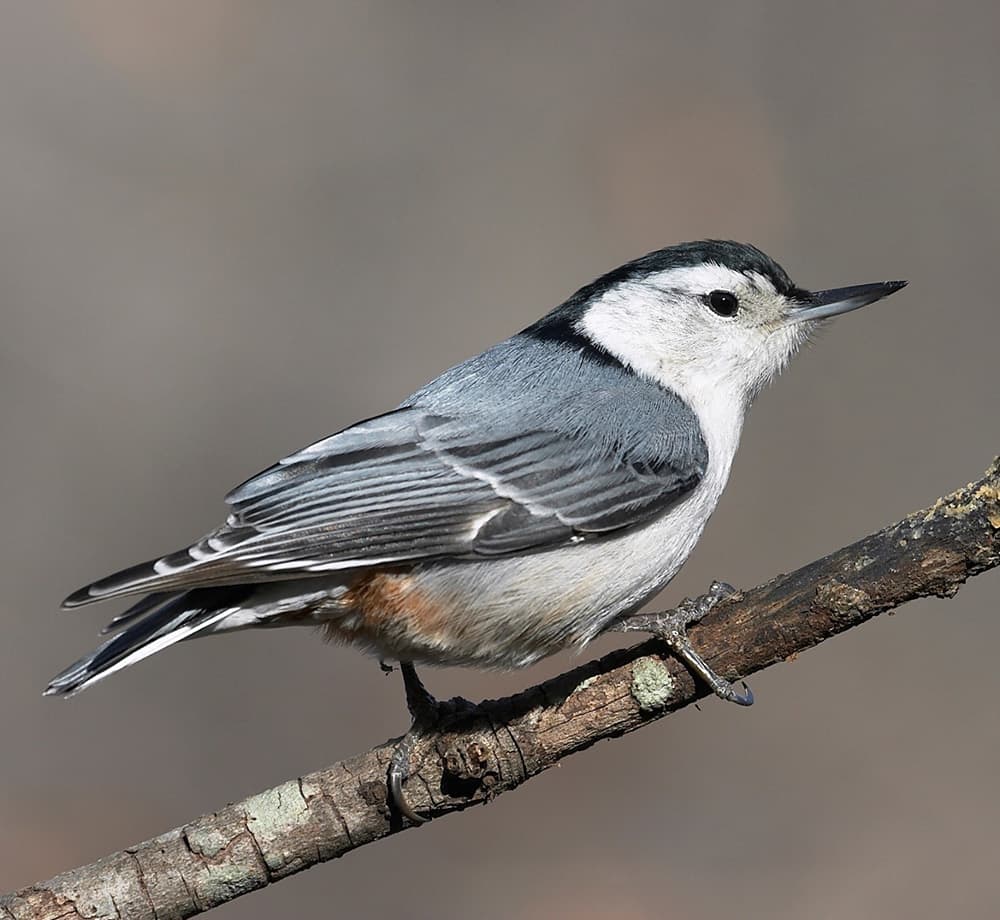 Like their relatives above, the white-breasted nuthatch is a joyful little friend always looking for bursting feeders. These birds are called nuthatches because they love finding nuts that they ram on the trees until they open. This is why you will find these little birds in forests and woodlands. 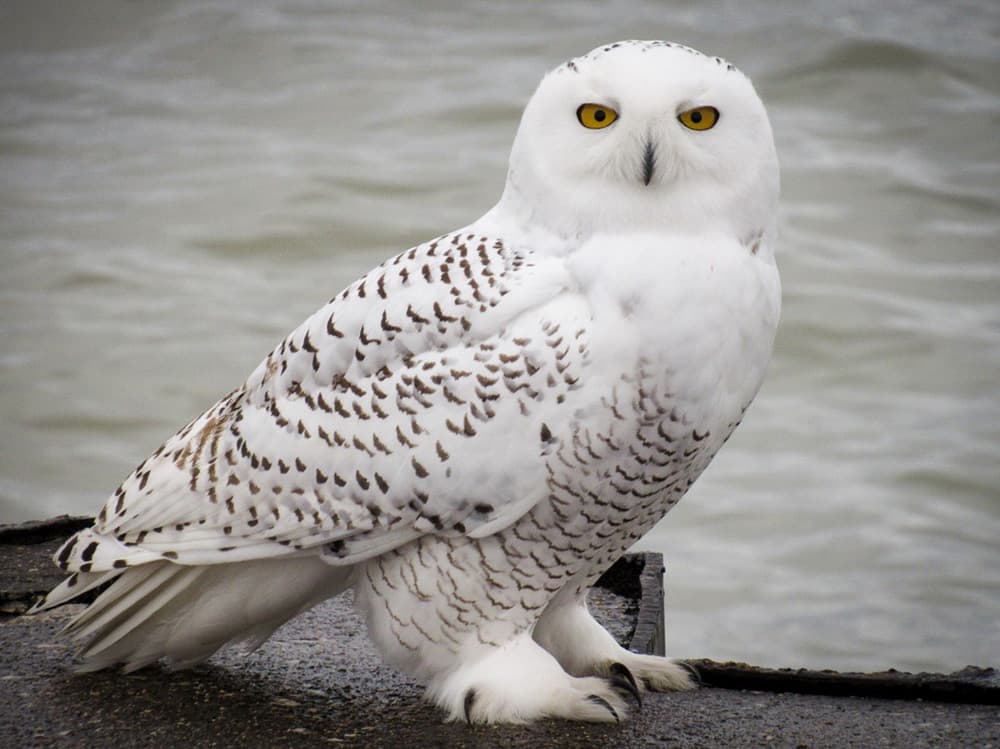 If you are in Canada during the winter, this is the main prize you can hope for. Spotting the snowy owl is an extremely rewarding experience due to its magnificent appearance. It is also quite tricky to find because it an endangered species. Owlets and females have black spots, just like in the photo above, while males are entirely white. 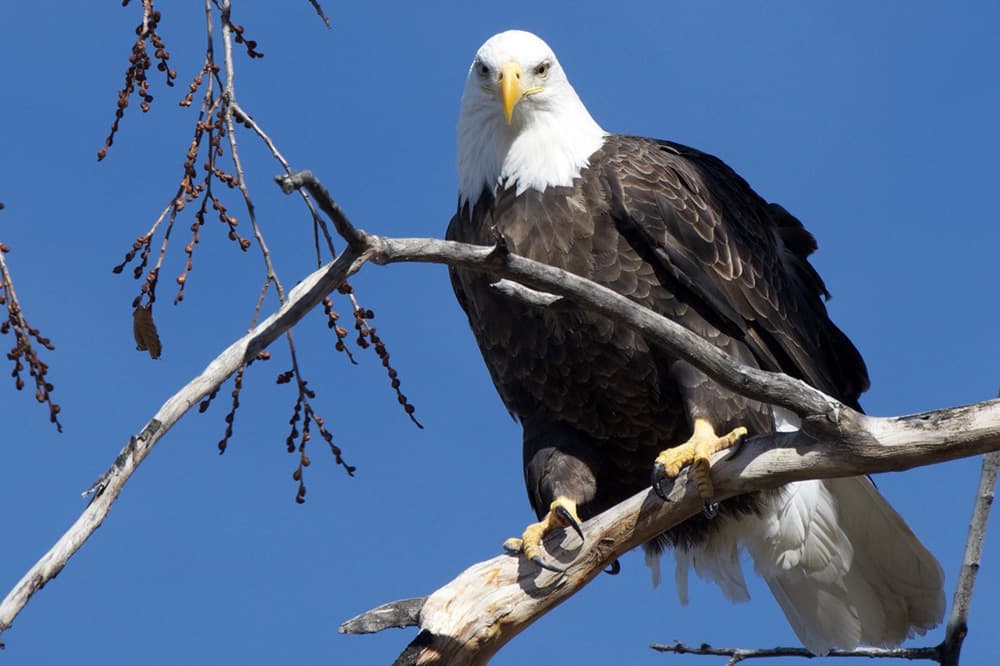 Although not exactly bald, this specimen has a white head and black body. The bald eagle won the record of creating the largest nest worldwide that boasts 1-ton weight and 4 meters depth. You can find these birds breeding in February in the Lakeland region. The bald eagle is also the national bird of the US. 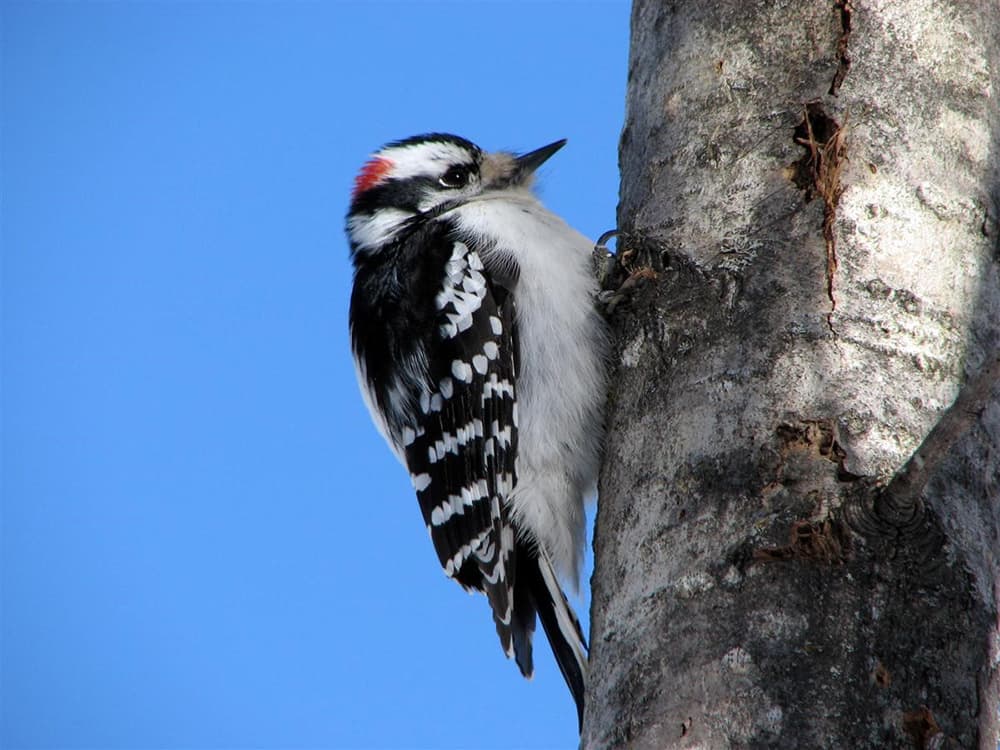 Who doesn’t love the cheerful, adorable woodpeckers? This specimen is smaller than its other relatives. They have a white underbelly, black back with a few white speckles, while males can be recognized due to the red spot on their cap, just like in the photo above. The downy woodpecker is one of the most common specimens you will find in the region. 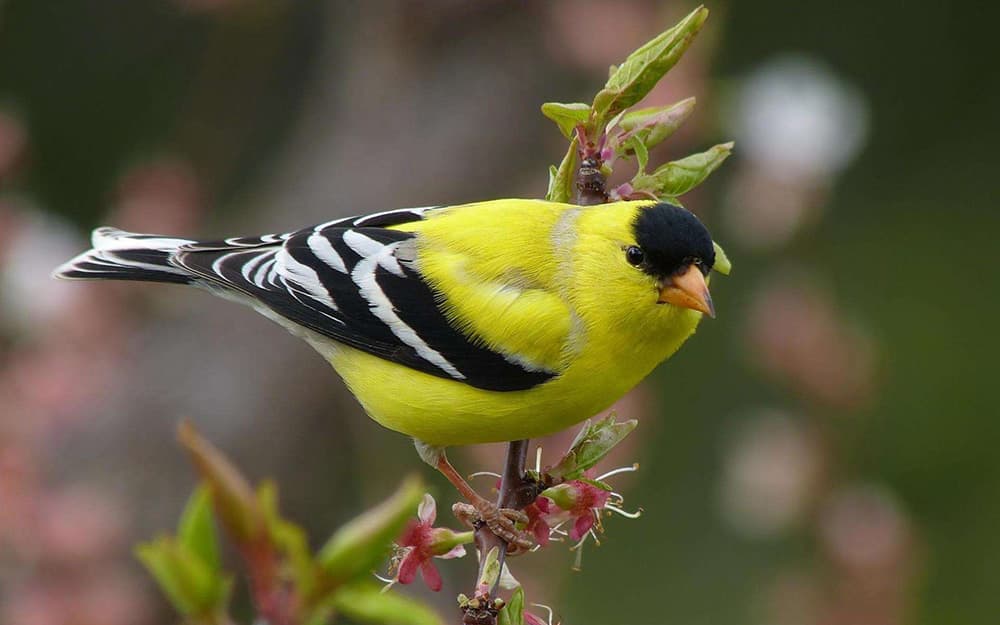 The American goldfinch is usually bright yellow (males) or a lighter yellow nuance (females) during the summer. In the cold months, both attain a brownish color. You can identify them due to the black tail with white lines. They are a frequent sight in Alberta’s yards and gardens. The favorite food includes sunflower kernels and nyjer seeds. 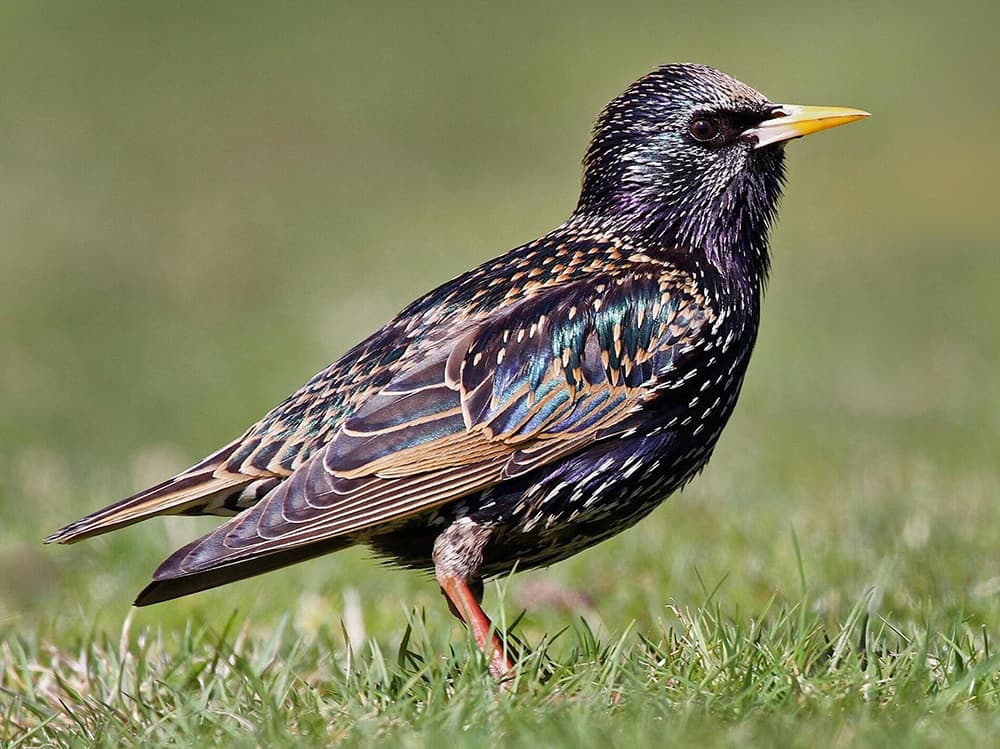 The European starling is more than impressive at first sight. Its complicated plumage has a glossy appearance, with a short tail and an elongated bill. The shiny look disappears in winter, and the bill darkens. This bird was brought to New York in 1890, and it had spread throughout the entire continent as quickly as possible. 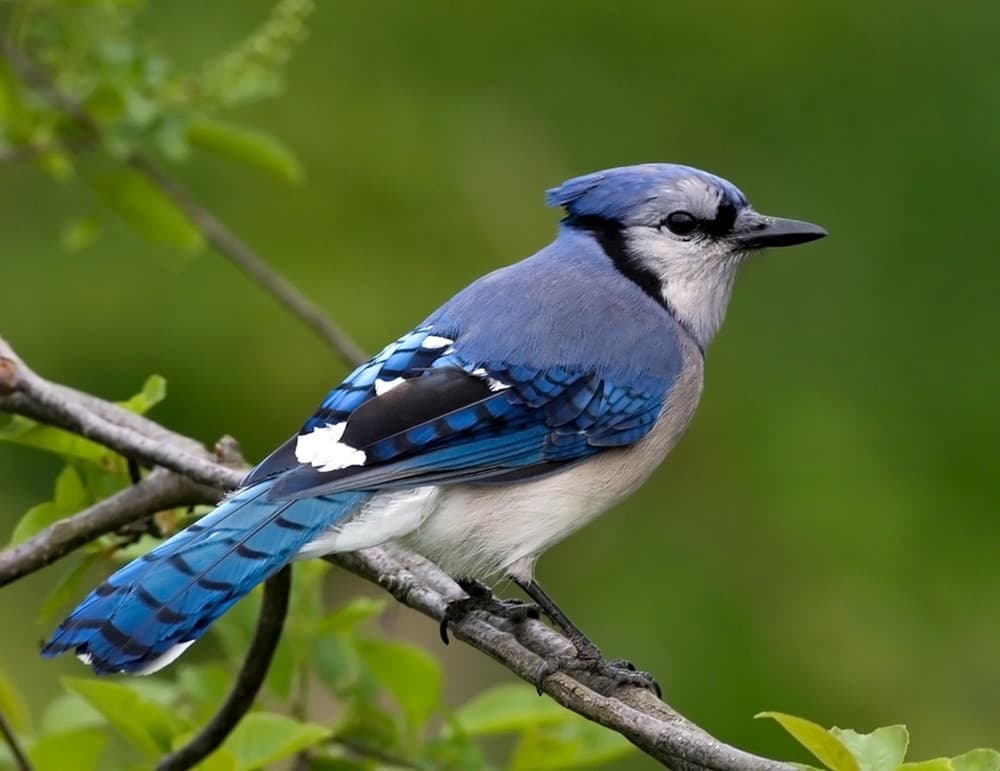 The blue jay gets its name thanks to due bright blue you can see on its head and back. With a puffy white underbelly, this tiny bird has a small crest. Apart from the beauty, many birders adore it because of its intelligence, so it is pretty entertaining to observe it. 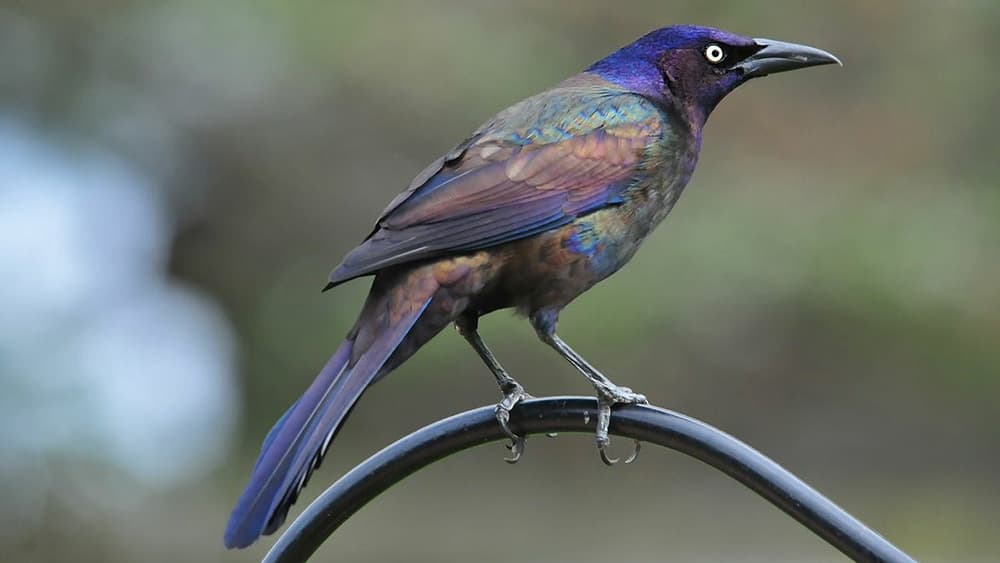 The common grackle is a larger specimen with a long bill and tail. It is very loud and often travels in large flocks that you can notice around tall trees. The plumage is extremely interesting due to the iridescent blue notes and a brownish, glossy body. These birds love grains, so they are considered agricultural pests since large flocks can be seen in corn and rice fields. 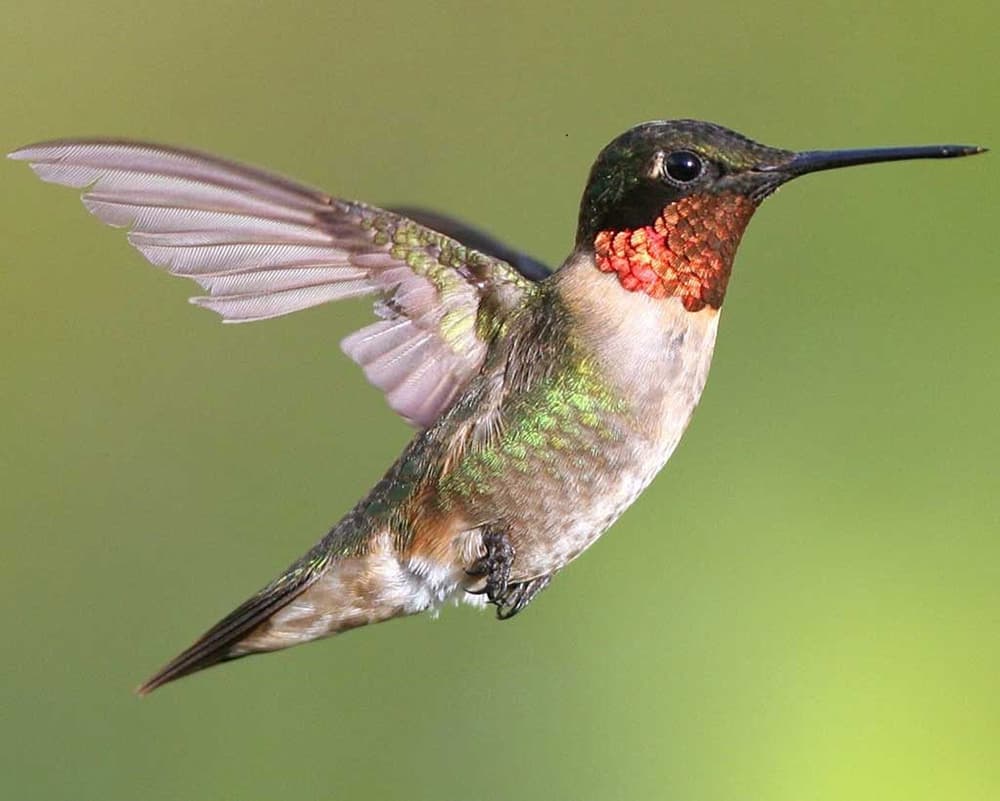 The delicate ruby-throated hummingbird has a brightly colored throat and a black cap. In the right light, you can also notice greenish speckles under its feathers and on its back. Females are not so bright, and they do not have the same red throat, but they still have a greenish back. You can find this bird in Alberta during summer. 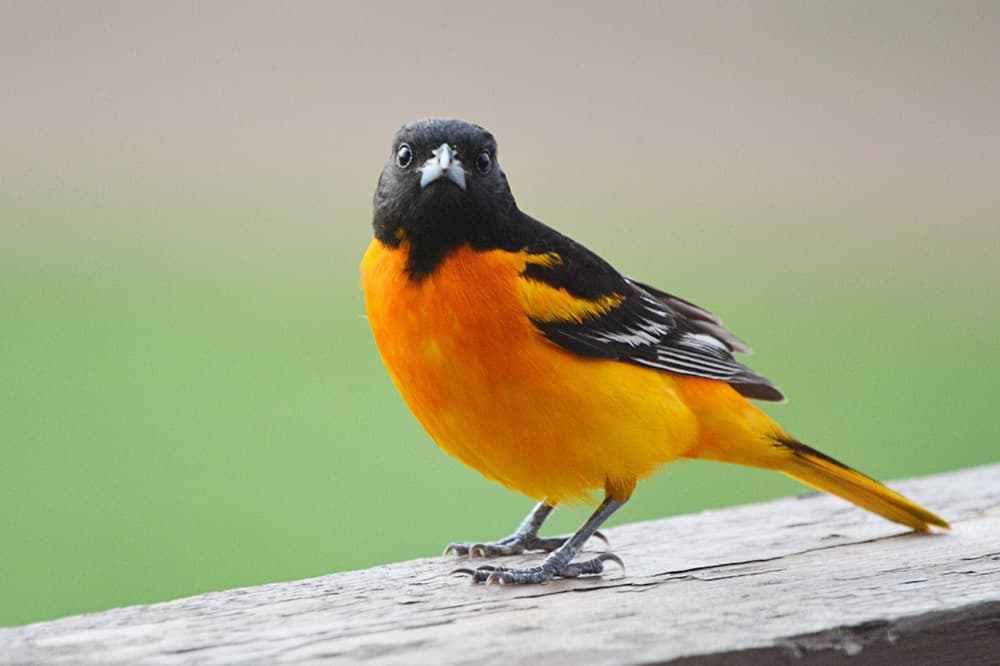 The Baltimore oriole is one of the first birds to announce the spring. Males have a beautiful combination of black back and bright orange underbelly and tail, while females are slightly duller. These birds can be spotted on top of high trees, searching for food and building their nests in woodlands, forests, or swamps. 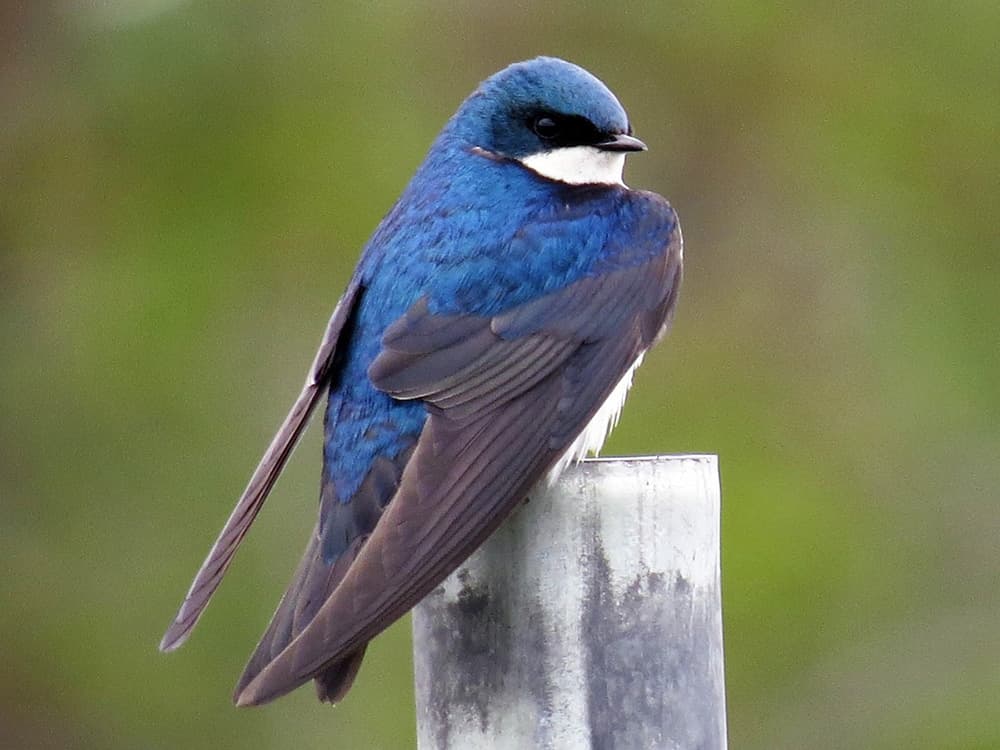 The swallow comes in no less than 87 varieties around the world. Out of these, only seven can be found in Canada. It is not a songbird, and it loves eating flying insects as they fly nearly all the time. When the bird spreads its wings, you may think it is a larger bird, but they are quite tiny. 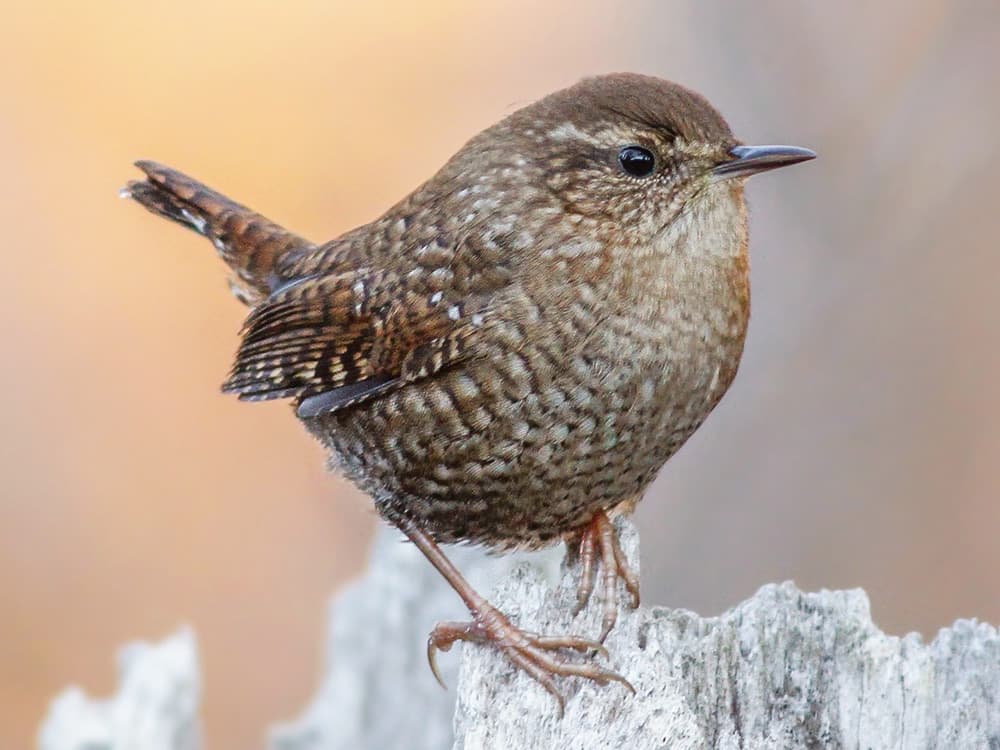 The wren is one of the most common species. It eats insects and has a primarily brown attire that covers its little, chubby body. The tail is usually upright. You can hear these birds during winter due to their long, pitched song.

The wood duck may be one of the most adorable, even humorous species you can find. It has a distinguishable haircut that you cannot miss if you are in Alberta, Canada. The box-shaped head is usually bobbing adorably, while the glossy green color blends in perfectly with the coffee-colored chest. The eyes are incredibly bright during the whole year, although the lightly colored sides and bold nuances are replaced with duller ones in late summer. 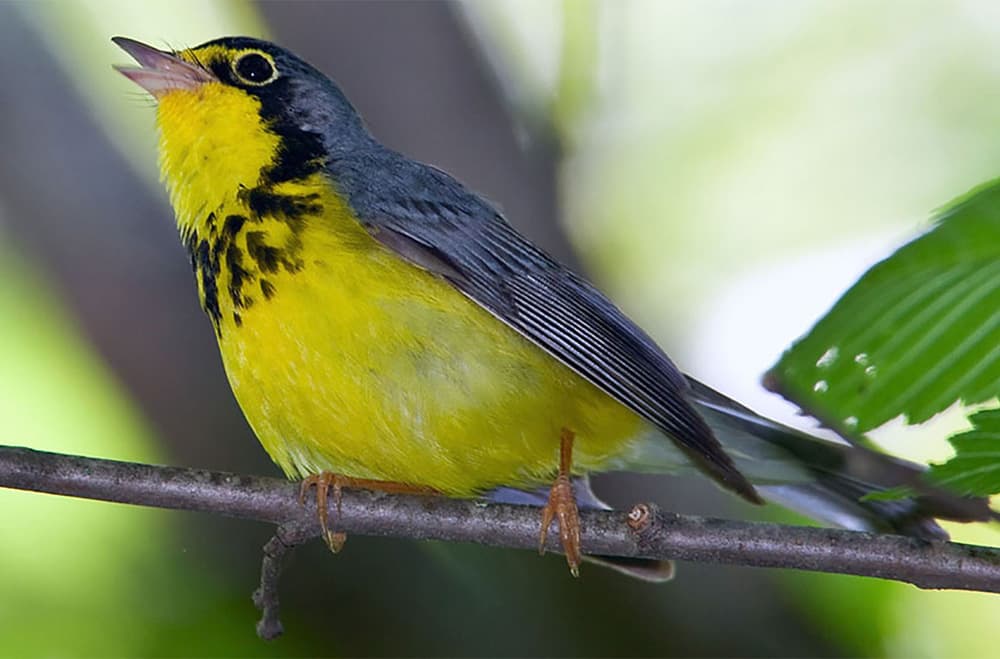 Warblers populate the northern forests, but it does not spend much time in Canada. It comes here to breed in spring and is one of the first warblers to leave in fall. Its plumage is easy to identify due to the beautiful black necklace and yellow underbelly and throat.