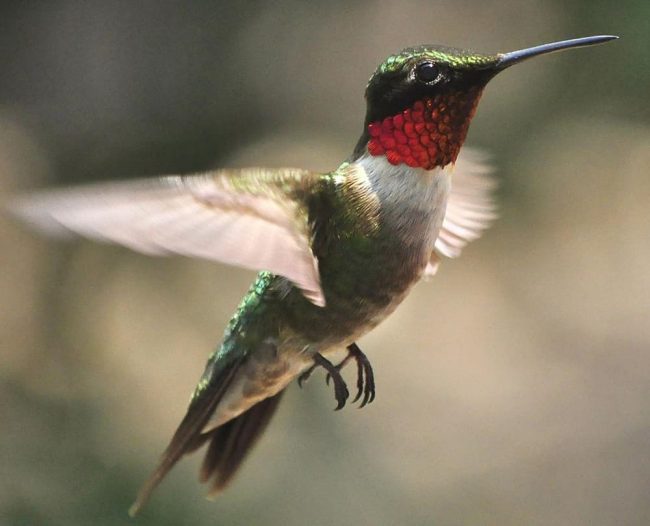 They say Alabama is a haven for bird-watchers. It just might be high on the list. As of October 2020, experts have documented 449 species in the Yellowhammer State, not too far away from the national number one, Alaska, with 530 species.

About 150 American Bald Eagles have made Alabama their home in recent years, making them the largest birds of prey in the state. The state’s own iconic bird is the Northern Flicker, which acquired its reputation as a symbol of ‘southern-ness’.

Also recently, Hurricane Irma pushed three Black-Capped Petrels into this state, where they’d never been seen before. We selected the finest and most common birds you could hope to see in Alabama. 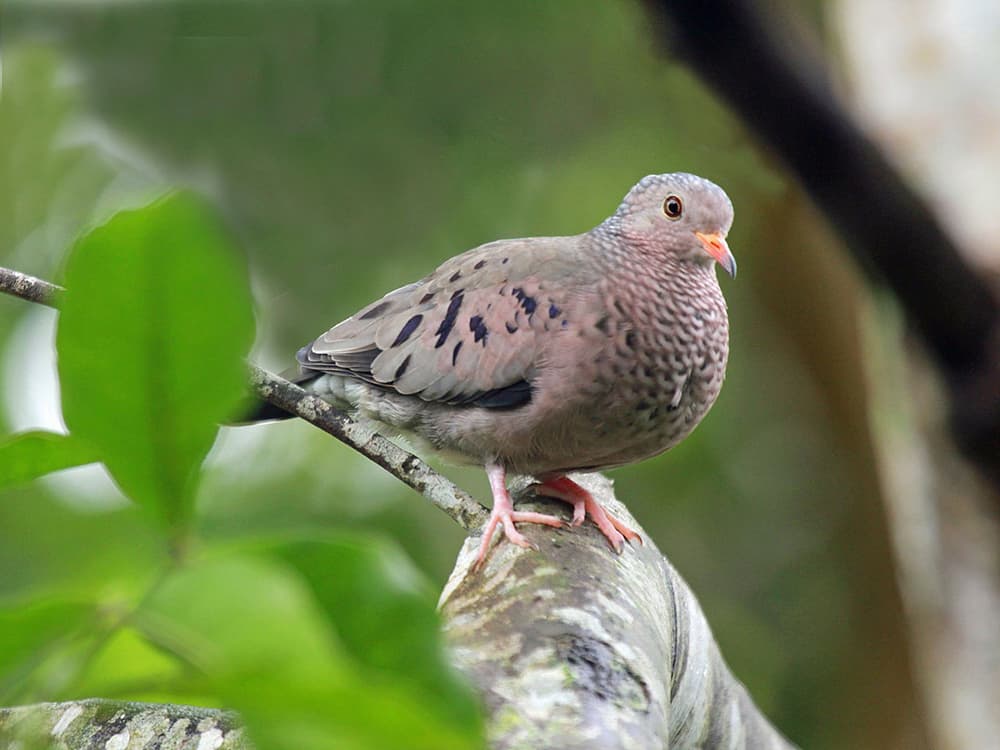 It’s a dove but it’s no bigger than a sparrow. Down in Alabama, they sometimes call The Common Ground Dove (Columbina passerina) the Moaning Dove because of its repetitive warble. You might not easily see it because its dusty plumage is easily missed but if you listen, you can hear its rising woot-woot-woot call, on the same note. They’re ground feeders and love sorghum, buckwheat, millet, canary seed and other seeds. They say it needs to eat up to 2,500 seeds a day to get the energy it needs. 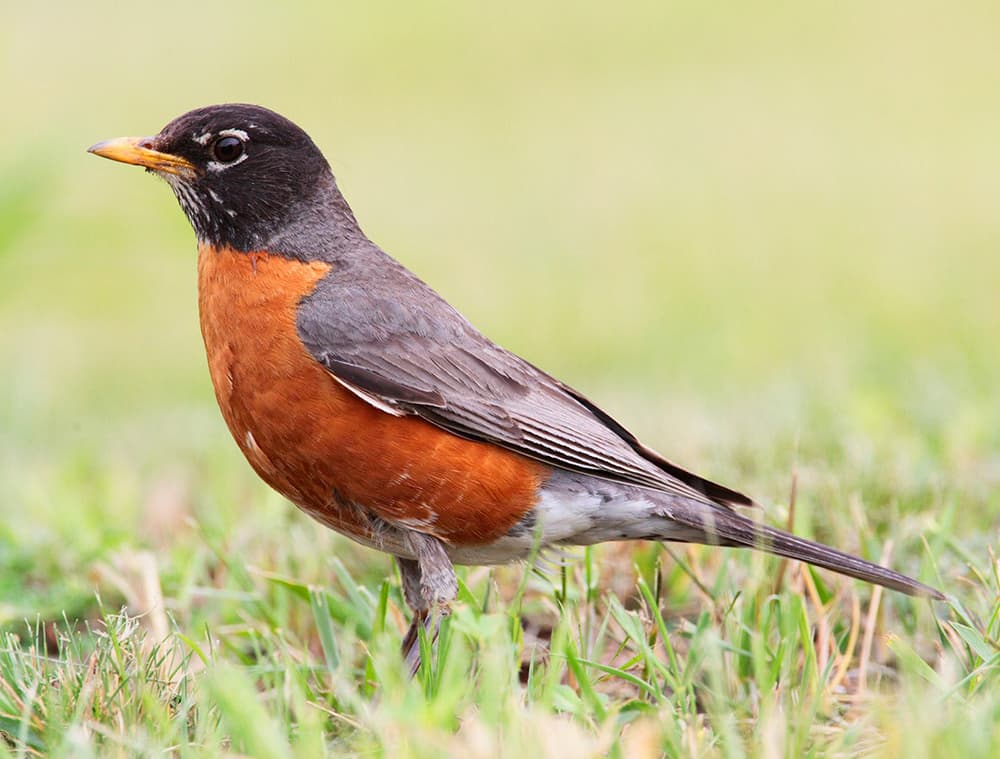 Heard the phrase about the early bird that gets the worm? Well, you might easily conclude that the American Robin (Turdus migratorius) must be the original early bird, just by the number of times you’ll see it tugging worms out of your garden soil. The truth is that these birds —which are also the state birds of Michigan, Wisconsin and Connecticut — have super-sharp eyesight which lets them see disturbances in the soil where worms might be moving from far away.


Oh, and they aren’t really robins but thrushes. The early European settlers missed the European robins and this looked close enough so they named it a robin. 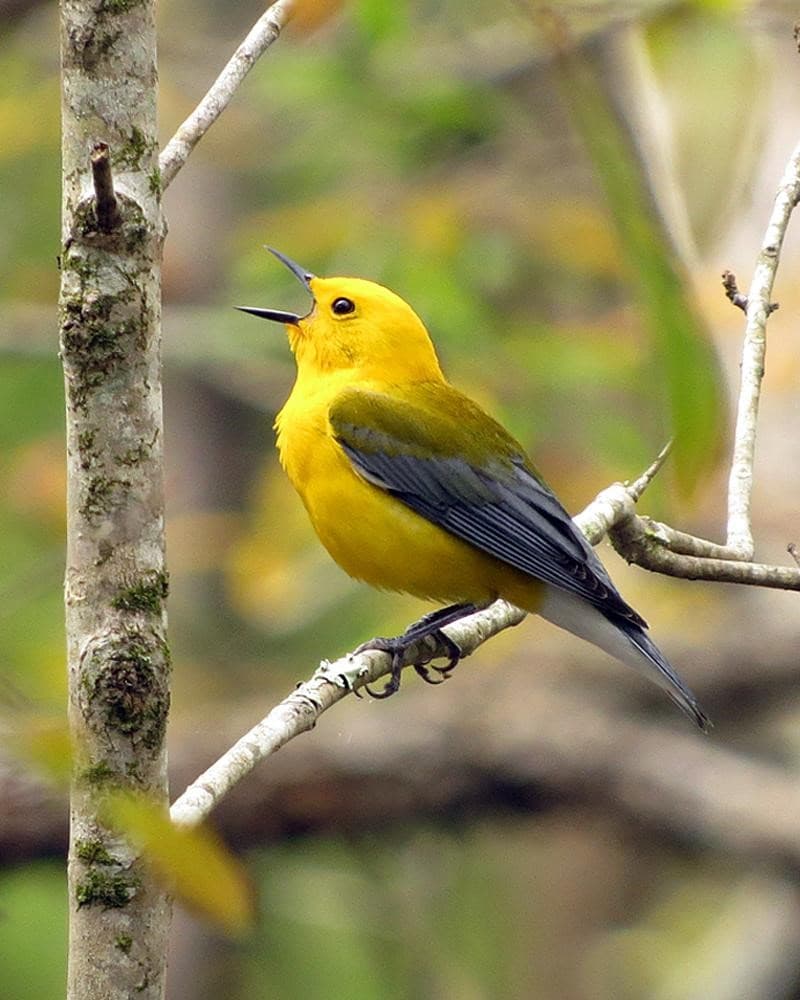 Ever seen the bright yellow robes worn by papal clerks in the Roman Catholic Church? That’s what this stunningly brilliant songbird reminded someone one, hence its name: the Prothonotary Warbler (Protonotaria citrea). Female Prothonotary Warblers won’t give time to day to a male if he doesn’t already have a home staked out, so males habitually build dummy nests before they start tweeting to the gals. 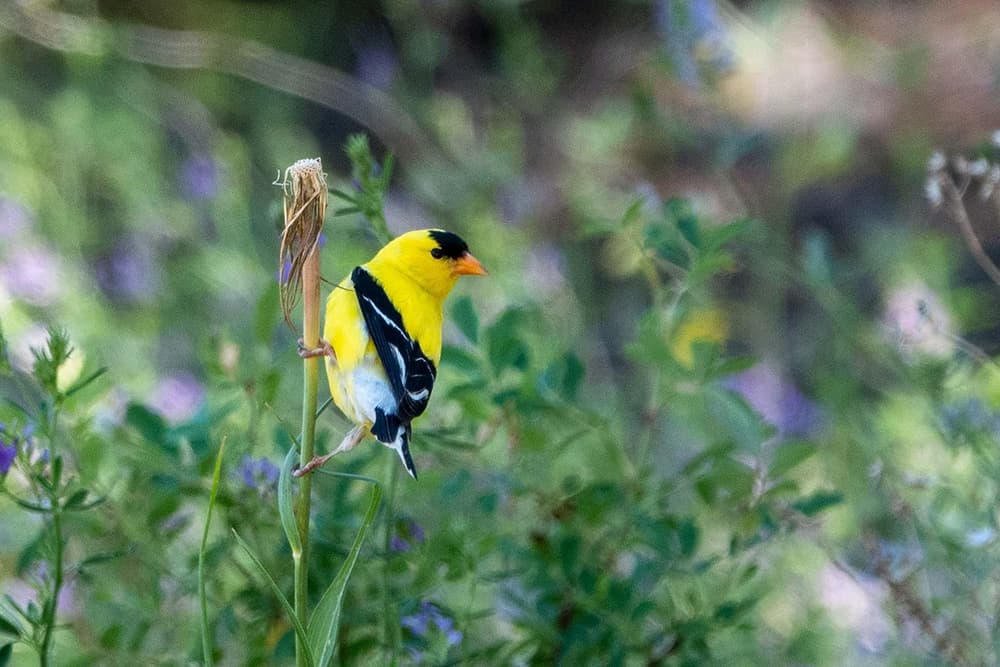 The best thing about the American Goldfinch (Spinus tristis) is that it’s a bathroom singer. Well, let’s say it loves singing. Sometimes it’s a per-chik-o-ree or else it’s flying and you’ll hear a ti-di-di-di. Expect long strings of musical phrases, repeated in no particular order. Although they’re easily spotted in Alabama, they happen to be the state birds of Washington, Iowa and New Jersey. 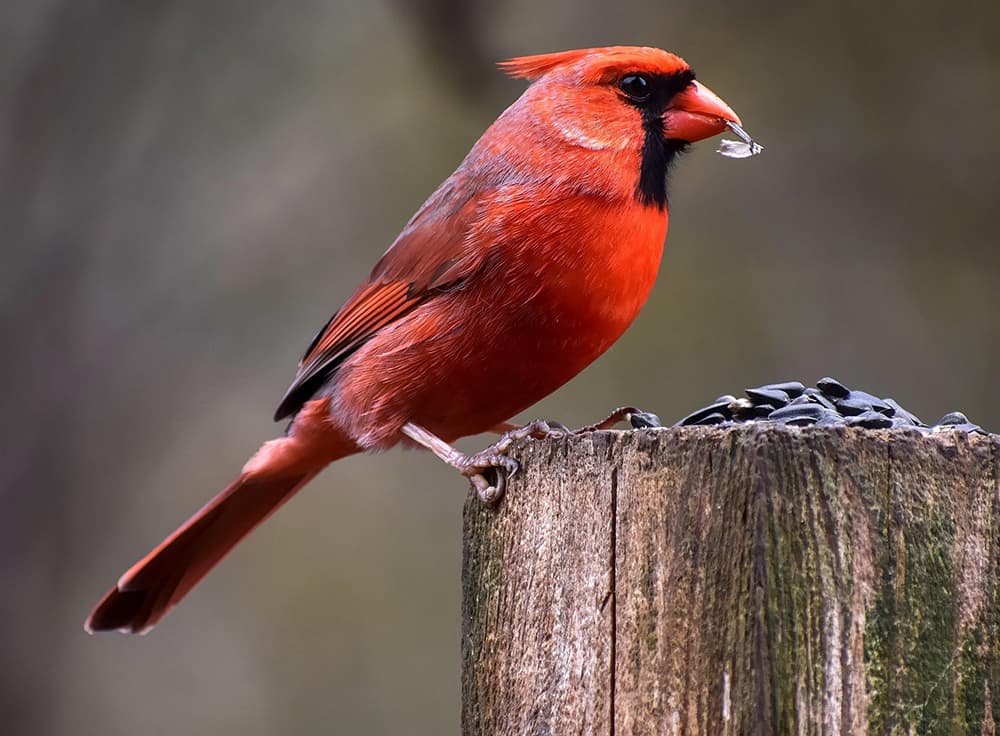 Another bird with Roman Catholic origins to its name, the northern cardinal (Cardinalis cardinalis) was named after the red robes by Cardinals in that church. They’re probably the happiest birds you could find, singing all the time. The songs vary widely and apparently hold meaning. For example, a certain song from the female tells the male it’s time to come home and feed the kids. 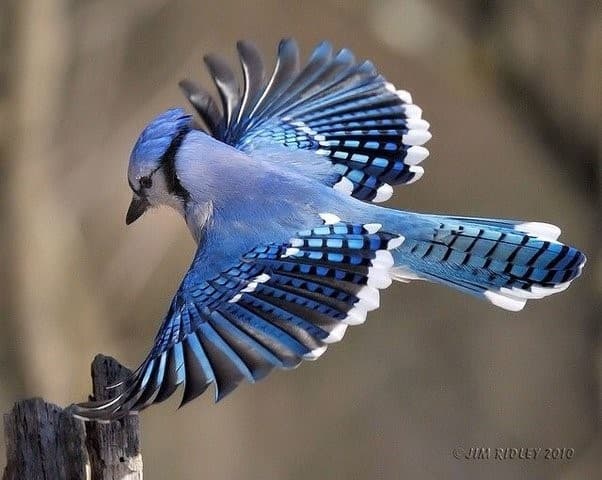 You can’t miss the Blue Jay (Cyanocitta cristata), with its lovely blue, white and black plumage. You might also recognize it by its raucous, almost rowdy, presence and their typical jay! Jay! birdcall. Some Native Americans believe the bird is a gossip-loving trickster who loves creating trouble for others.


One thing not in doubt: they are smart as razor blades. They’ve been known to use strips of paper to pull food into their cage. They’ve also been heard mimicking the cry of the Red-Shouldered Hawk, to warn other Blue Jays that the predatory bird was on the prowl nearby. 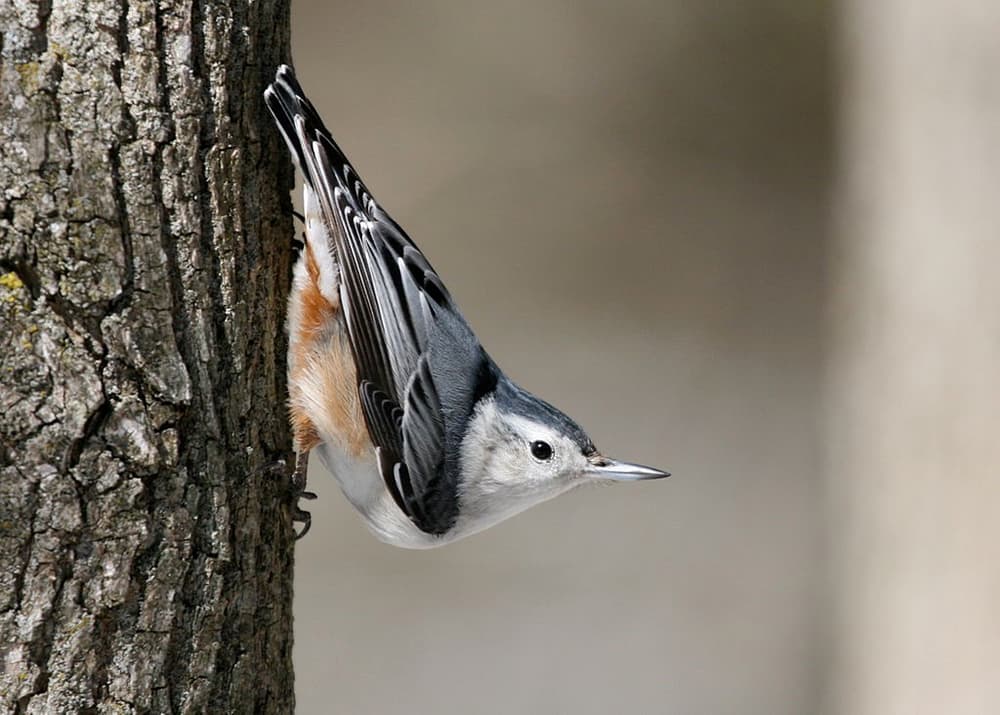 The White-Breasted Nuthatch (Sitta carolinensis) can walk headfirst down tree trunks using its unusual feet, which have three toes facing forward and one big toe called the hallux facing backward. It goes down the tree moving one foot at a time while the hallux of the other holds on to the trunk.

They also believe in true love, monogamy and till death do us part. These birds spend their lives in pairs, are fiercely protective of each other and their chicks. The female is never far from her male and will constantly be calling out to him, a bit like a girl-friend constantly texting her guy. 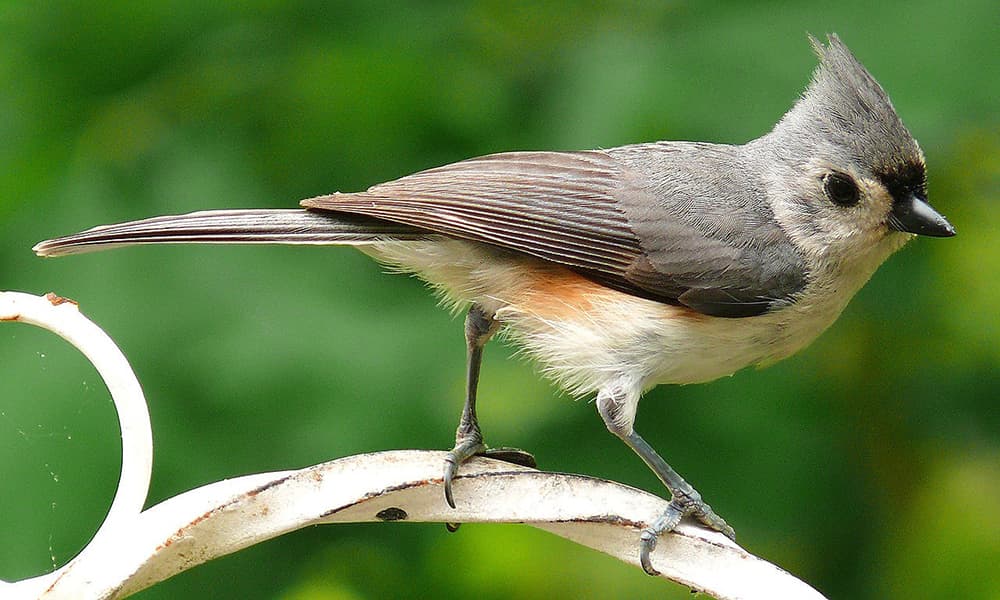 Imagine a bird with a built-in echo to its voice. That’s the Tufted Titmouse (Baeolophus bicolor). In fact, with its fashionable brush-like crest, you might even wonder if its natural birdcall might be a rap. They live in pairs all through their lives and like to build their homes in deadwood, one good reason why you shouldn’t cut down old trees.


Oh, and they have a liking for lining their nests with the hair of animals. Live animals. Like raccoons, opossums, squirrels, rabbits, and yes, even humans. So if one lands on your head, it’s because he wants a tuft of you. 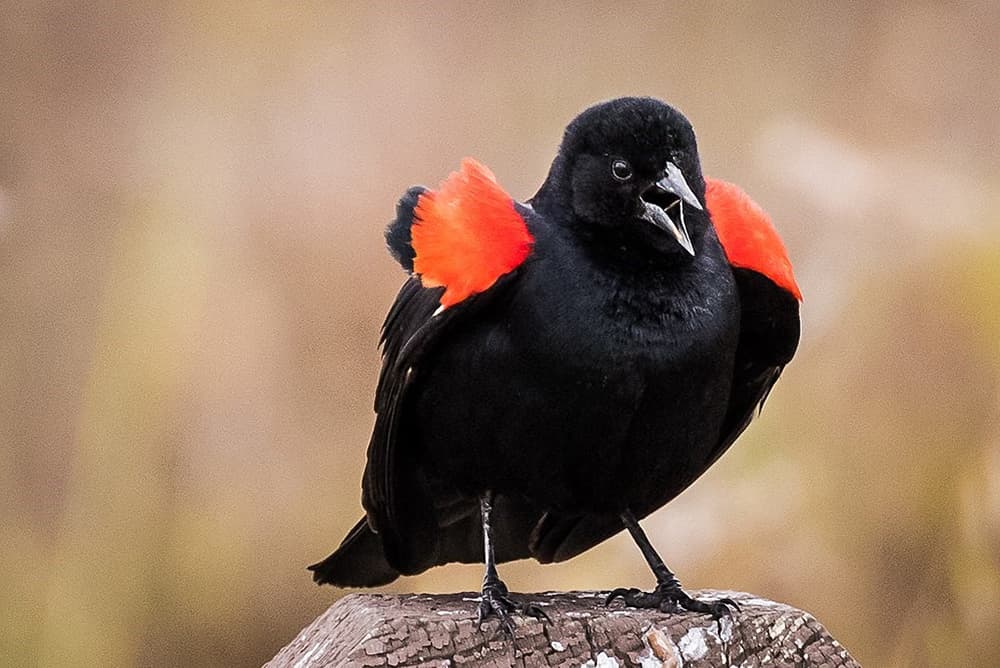 There can be over a million birds in a single migratory flock of the Red-Winged Blackbird (Agelaius phoeniceus). Some even say this might be the most abundant living land bird in North America. In a good year, they can be more than 250 million breeding pairs. Not surprisingly, it is also one of the most studied bird species in the world.

But no, this was not the bird that inspired Paul McCartney to write his famous song Blackbird. The ‘bird’ there is English slang for ‘girl’, and he wrote it at the height of the American civil rights movement. 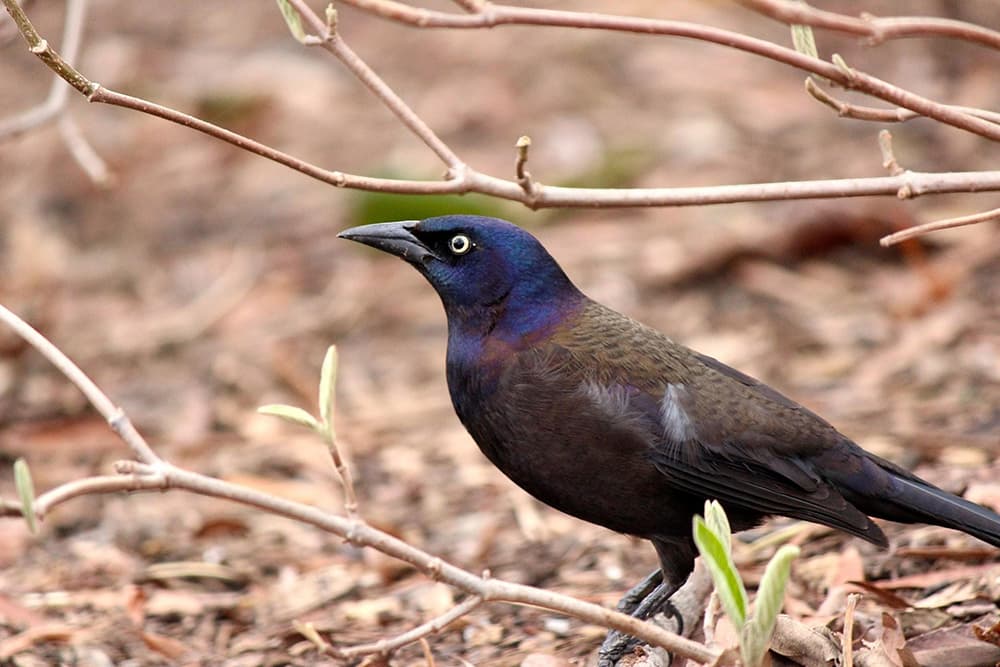 Looking at the Common Grackle (Quiscalus quiscula) you might think it looks like someone resized a blackbird without maintaining the aspect ratio. They are indeed members of the blackbird family, but taller and longer-tailed. You would not guess looking at them that they can literally saw open acorns using a jagged keel on the underside of their beaks.


From time to time, you might come across a Common Grackle standing still and hunched with its wings outspread, letting ants swarm all over it. It’s called ‘anting’ behavior and useful to the birds. Ants release formic acid when they sting and this rids the bird of parasites on its body and in its feathers. 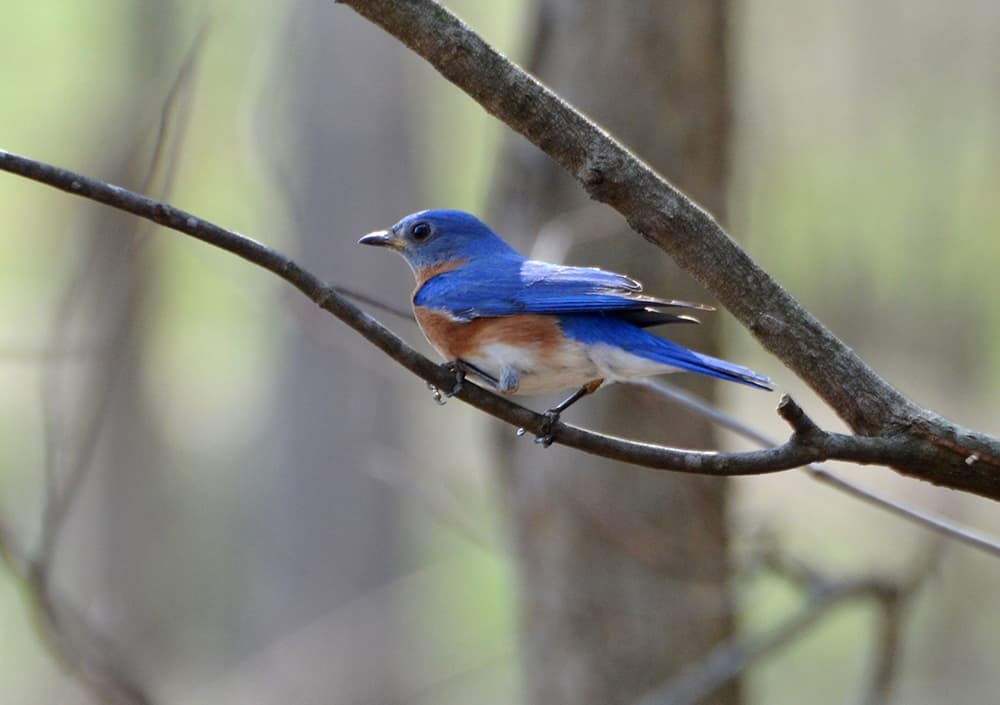 It just might be America’s most beloved bird. It was friends with Snow White, Cinderella and Sleeping Beauty. They say it’s in the lyrics of over 500 songs including Somewhere Over The Rainbow and White Cliffs of Dover and has been honored by artists such as Judy Garland and Louis Armstrong. Native Americans hold it in high regard as an omen and a mentor.

The Eastern Bluebird (Sialia sialis) is, alas, an endangered and rare species today, kept alive by conservationists more than nature. It is estimated that 70% of them die within their first year. 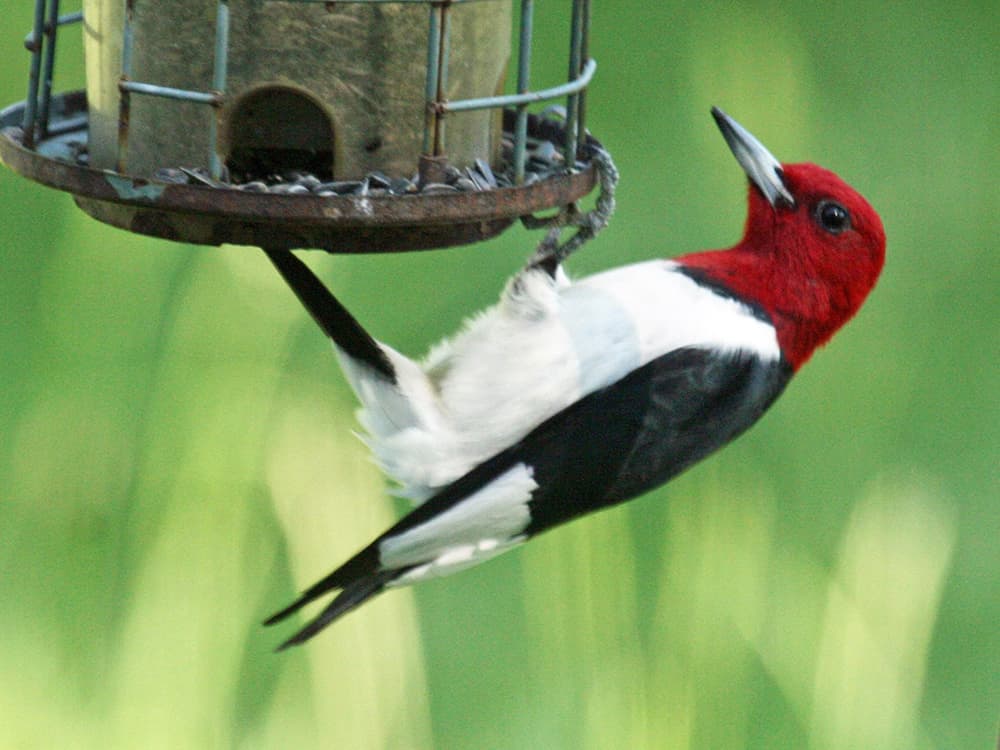 It might be one of the few birds to get a postage stamp released in its honor. In 1996, a 2 cent stamp was issued featuring the Red-Headed Woodpecker (Melanerpes erythrocephalus), one of the most attractive of this breed with its bright red hood. In 2018 it was on the International Union for Conservation of Nature’s Red List as ‘near threatened’, but is now listed as a bird of  ‘least concern’.


In winter, when the ground is hard, they dig holes in the ground searching for insects and food. They can make a hole 2 feet deep over about three weeks. 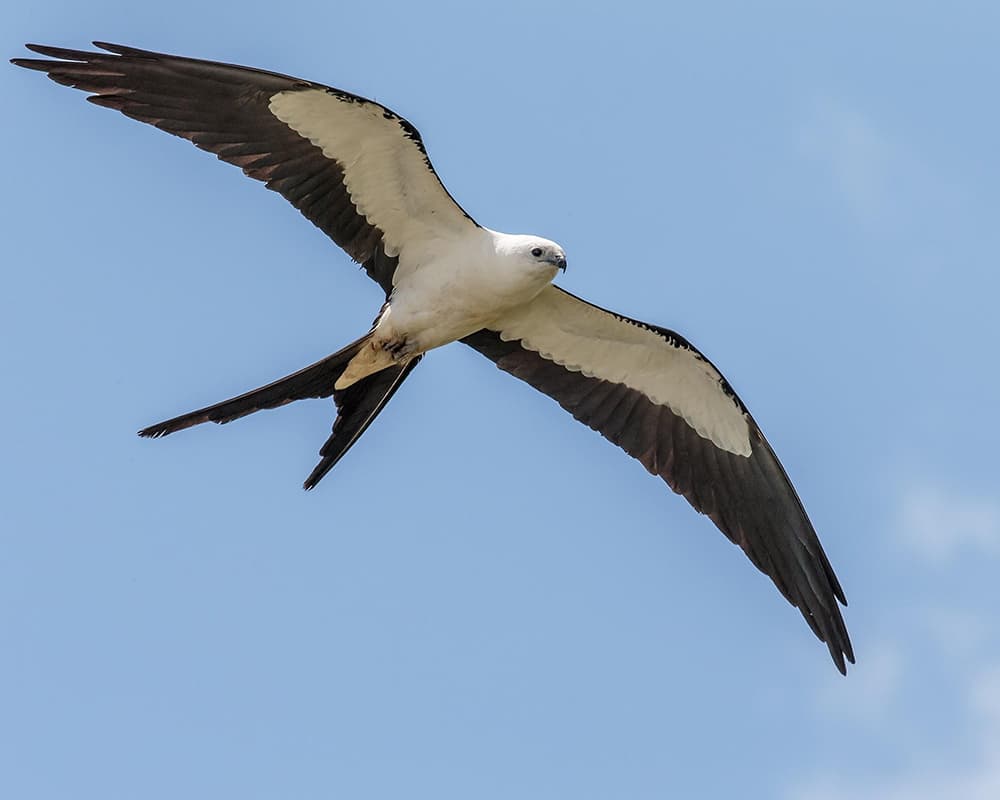 The Swallow-Tailed Kite (Elanoides forficatus) must have the mind of a sniper and the soul of a ballerina. Sniper because it can accurately pluck small insects out of mid-air without breaking flight, and quenches its thirst by skimming low over lakes collecting water in its beaks. Ballerina because it is one of the most graceful of birds, able to swoop, glide, flip and roll and ascend with no discernible movement of its wings. 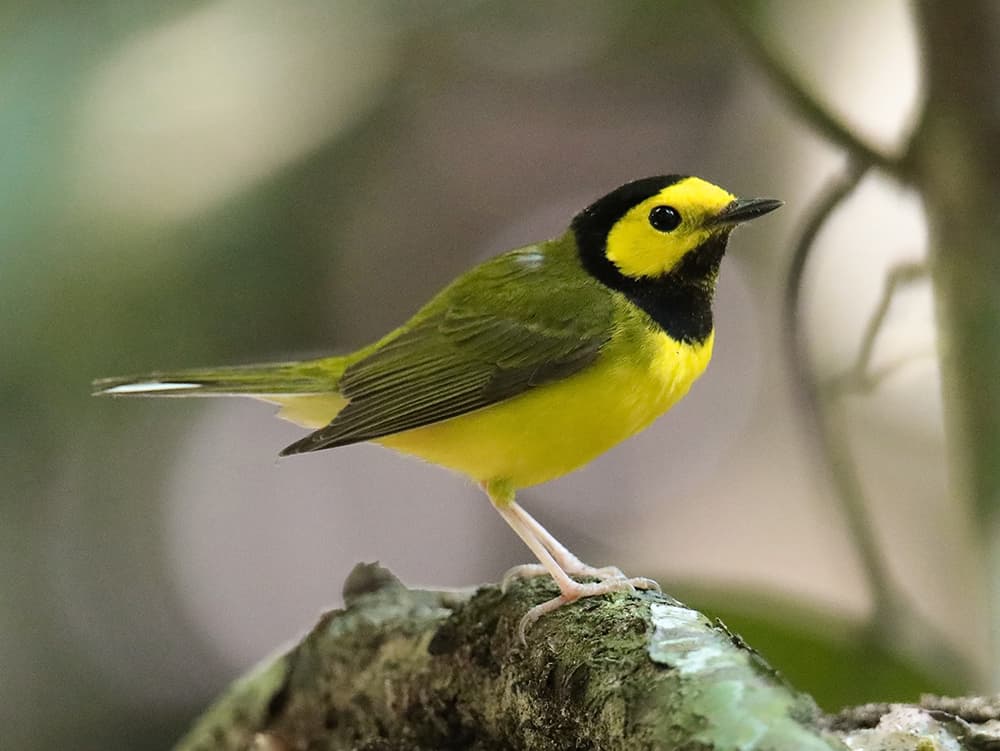 The poor Hooded Warbler (Setophaga citrina) keeps bumping into glass, buildings and wind turbines, because it is a nocturnal migrant. Even during the day, it tends to stay low in the undergrowth, where it is dim. Occasionally, it will dart out to catch some tasty snack insect in mid-flight. However, in general, you will hear the cheerful call of this bird — tawee-tawee-tawee-tee-o —before you see it. 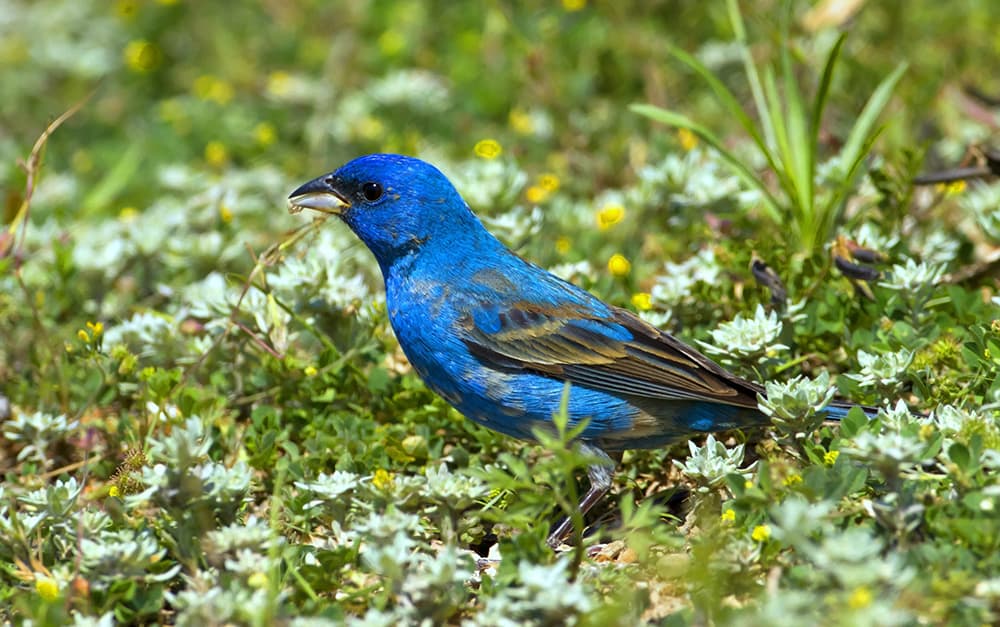 There was a time when ornithologists feared that the gorgeous Blue Grosbeak (Passerina caerulea) would disappear from our lives forever. But that time was 1834. Today there are probably more of these lovely songbirds than ever before. Like the peacock, the good-looking one is the male, The female Blue Grosbeak is mainly a Brown Grosbeak.

They’re caring birds. They care for their own chicks and also any other chicks that happen to be born in their nests. Brown-headed Cowbirds, knowing this, sneakily lay their eggs in Blue Grosbeak nests and the chicks get loved to bits all the same. 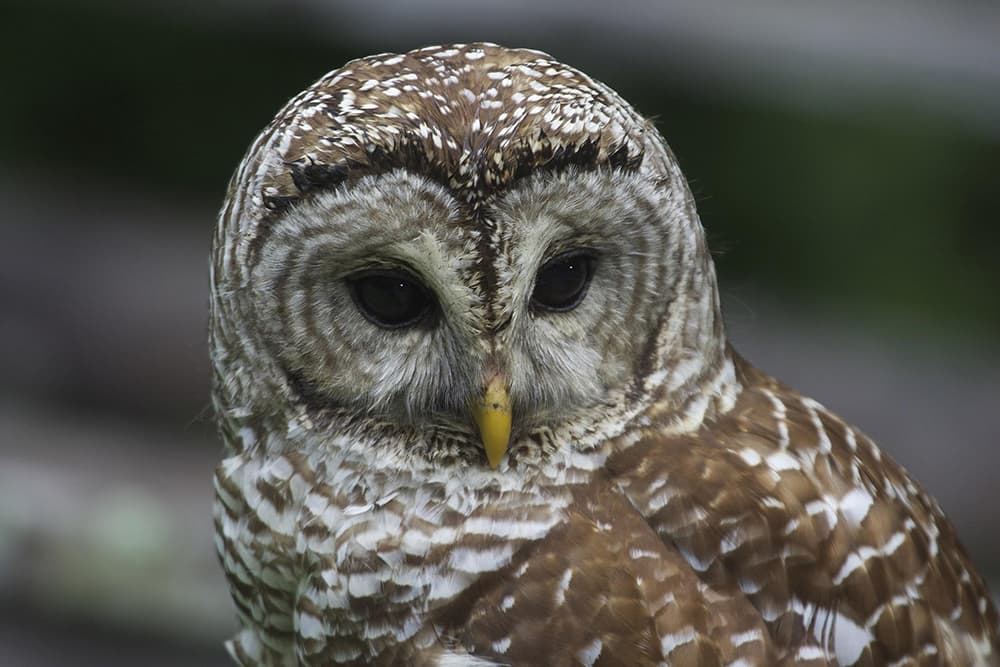 
The calls will come in sets of eight followed a silence while the bird waits a reply from other birds nearby. Of course, if two Barred Owls fall in love, they’ll sing together, a perfect duet.

Needless to say, you’ll be forgiven if you wonder for a moment if you’ve seen him somewhere before, perhaps a Harry Potter movie. 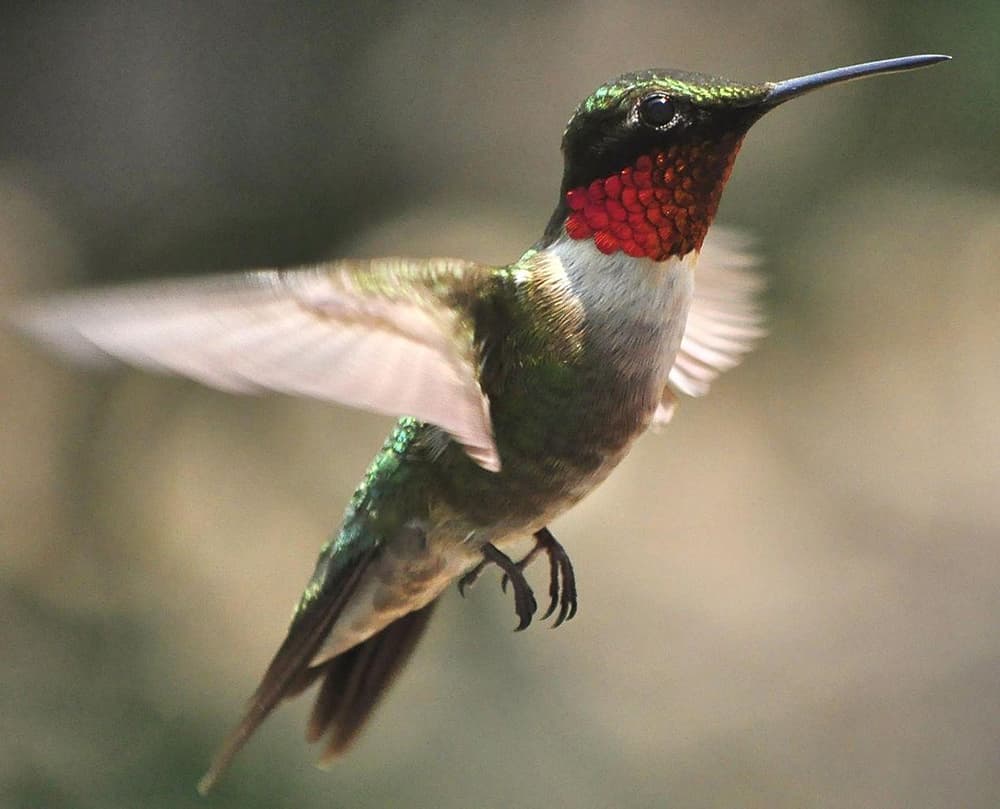 If you want to see the incredible sight of a  bird flying at a great speed and stopping in mid-air in an instant, look no further than the Ruby-Throated Hummingbird (Archilochus colubris). It can also calibrate its position in mid-air, rising up by just a few tenths of an inch if needed to get at the nectar.


The truth is that their legs are so short that they make very poor walkers, and have compensated by evolving exquisite flying skills. They beat their wings 53 times a second and can perform aerial acrobatics unmatched by any other bird, including hovering, flying upside down — and flying backward. 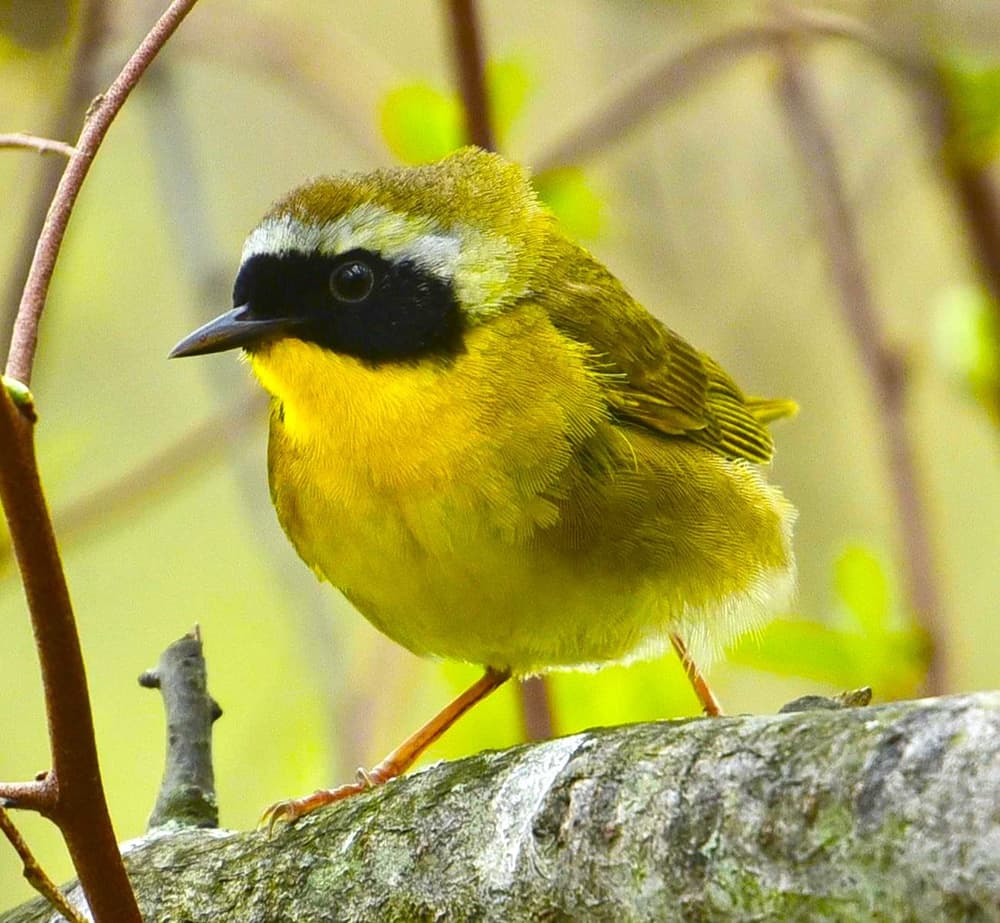 At first sight this bird might seem to be wearing a mask around its eyes, á la Zorro. Maybe this is why the Common Yellowthroat (Geothlypis trichas) is known as the ‘yellow bandit’ in many places. Chances are you’ll never see this fine fellow. It spends its time bouncing within the undergrowth, keeping a low profile and foraging for insects, grubs and other tasty fare right there. No wonder it’s sometimes called an Earth Finch. 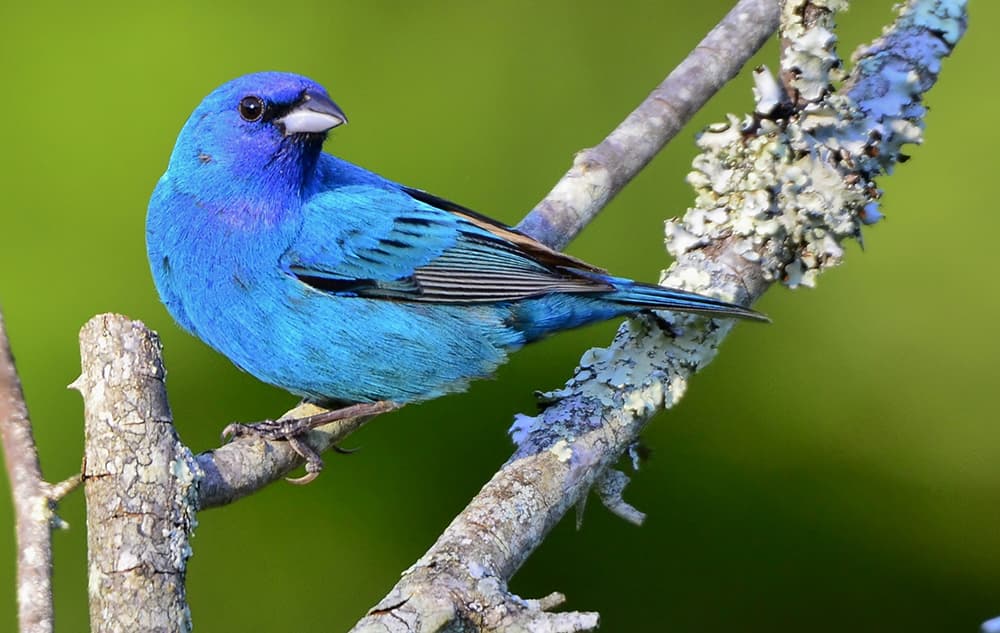 You’d never guess that the brilliant cerulean blue Indigo Bunting (Passerina cyanea)  was actually a darkish brown. If you held it up to the light, though, it would be refracted and show through in a dazzling array of shimmering colors from midnight blue to turquoise.  Scientists discovered this by inspecting the dull brown feather in a planetarium rather than in daylight.

Oh, and they’re polygamists. A male bunting can have several females in his territory once he’s established his nesting site. 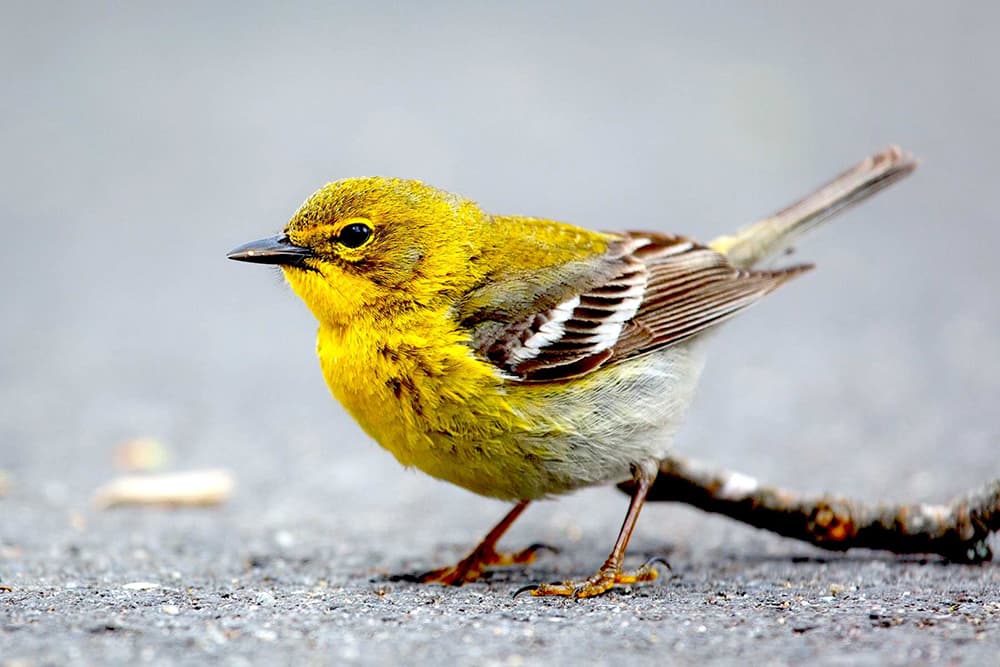 Where would you not find a Pine Warbler? Pretty much everywhere, it turns out. The Pine Warbler (Setophaga pinus) actually seldom strays far from its usual location high up among pine trees, where it happily spends its life lazily foraging for its favorite insects, slugs, flies and other snacks right there.

This is one reason why you might never see one in your life — unless you set up a backyard feeder. The Pine Warbler is usually one of the first birds to descend on a feeder, especially if it sees peanut hearts, crushed nuts, cracked corn and sunflower seeds.